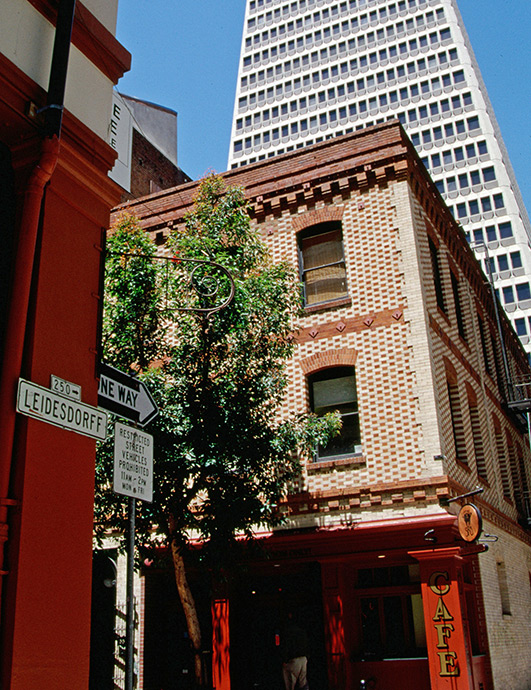 There were several American Indian tribes in the region before San Francisco was settled in 1776 by Mexican and Spanish explorers in their De Anza expedition of California. The area slowly grew until two catalysts arrived.

Leidesdorff died in 1848 just before the “Gold Rush” began in 1849. Sadly, when he died without surviving children, Leidesdorff’s property went into probate. His mother and siblings unsuccessfully contested probate due to laws prohibiting the testimony of Negroes. Simultaneously, the prospect of getting rich dramatically increased the state population. Over 80,000 people came in the space of a few months, including free African-Americans and slaves with their masters. Thousands flocked to the city in preparation for or after their search for gold in the Sierra Nevada Mountains. Imagine how wealthy the Leidesdorff Estate would have become selling food and goods to those fortune seekers — we’re talking Rockefeller wealth.

Mary Ellen Pleasant arrived in 1849. Madame Pleasant’s boarding house for cards, liquor and “beautiful women” allowed this sister to prosper. She co-founded the first “Bank of California”, a shelter for abused women and children, and formed the western terminus of the Underground Railroad in San Francisco. She fed them, found jobs for them and gave many African Americans their first business loan. California was admitted into the United States of America in 1850 as a free state. The prospect of more freedoms and jobs in the Western Pacific Railroad attracted more African-Americans to the Bay Area.

Through Mary Ellen Pleasant’s assistance, African-Americans began forming pockets of communities in the South Park, Telegraph Hill and the northern Financial District adjacent to present day TransAmerica Building. In 1858, she gave John Brown $30,000 to finance his raid of Harper’s Ferry, Virginia. For her courageous, abolitionist actions she was threatened by pro-slavery interests in the city and from other parts of America. Nevertheless, she led many civil rights activities before and after the Civil War.

By 1940, 16,000 African Americans lived in the San Francisco Bay Area, with most of them in San Francisco. The situation changed dramatically as a result of World War II. A worker shortage at the naval shipyards in the Bay Area drew blacks from Mississippi, Alabama, Louisiana and Texas. These new immigrants settled in San Francisco and Oakland. After Japanese Americans were sent to internment camps during the war, other African Americans settled in the Bayview-Hunters Point District. At its height, African Americans comprised over 15% of San Francisco population, numbering close to 100,000. Though mostly segregated, the Fillmore was a thriving self-sufficient middle and lower income community. With Fillmore Theatre as a nexus, it was particularly strong in the Jazz Era. All the early Jazz and R&B legends played here.

Once the Fair Housing Act began in 1968, some middle class black families would have chosen the suburbs for larger houses and yards. But that alone does not explain why so many moved from a desirable community whose property values would increase. Something insensitive and deliberate happened. Official city policy in the 1960’s embarked on urban redevelopment in the Fillmore District, which amounted to large scale removal of stable black middle class families.

Today, African Americans comprise about 10% of San Francisco’s population or 78,000, when it easily could have been double and wealthier.