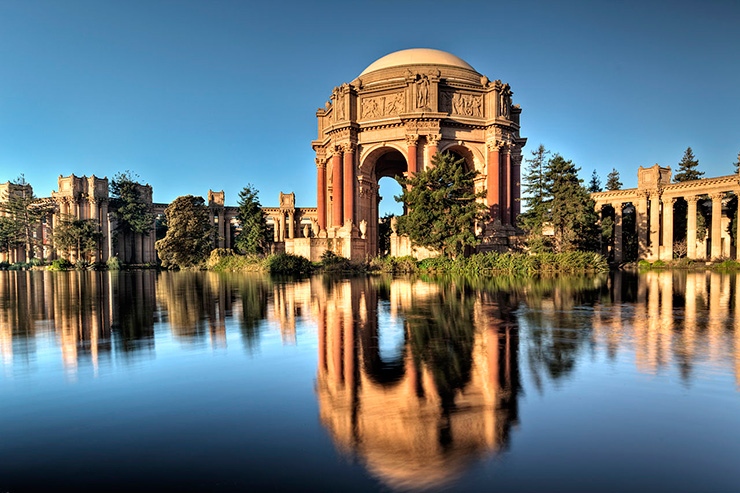 San Francisco Museum Of Modern Art
DESCRIPTION: SFMOMA’s architectural design soars within and without. It features a design collection of magnificent hand-written drawings, prints and objects by regional, national, and international artists. The time-based media collection is as cutting edge and greatly benefits from being in the heart America’s media technology center. The painting, sculpture and photographic collections reflect bold range of modern and contemporary art, while serving as a nice foundation for the many exciting exhibitions that visit SFMOMA –they don’t get any better or more diverse. The Research Library contains over 53,000 monographs, exhibition catalogues, other objects and 1,840 periodical titles. The Museum Store has a fantastic collection of art books and gifts. Caffe 5 is a hip place to hang out at lunch time.
ADMISSION: Members Free, General admission $25, Seniors (65 years and older) $22, Ages 19-24 with ID $19, Ages 18 and younger Free
DAYS & HOURS: Galleries Fri-Tue 10a–5p, Thu 10a-9p. Public spaces open at 9a.
ADDRESS: 151 Third Street, San Francisco MAP
RAPID TRANSIT: BART-Muni Metro Montgomery Street Station
PARKING: garage behind the museum
PHONE: 415-357-4000
WEBSITE: http://www.sfmoma.org

SFJAZZ Center
DESCRIPTION: In 2013, San Francisco built an exquisite palace for Jazz performance and education that surely makes New Yorkers and Chicagoans jealous. The big room is 90 feet x 90 x 40 feet high with steeply raked seating that provides great sight lines for both artists and patrons. Acoustics design and materials were fine tuned for its dimensions as well. During the day, the Jazz Center hosts educational programs for talent young high school musicians. The center is also home to a jazz collective comprising eight of the finest performers/composers at work in jazz today. Launched in 2004 by SFJAZZ in San Francisco, the SFJAZZ Collective has become one of the most exciting and acclaimed groups on the international jazz scene. As soloists, composers, and bandleaders, the SFJAZZ Collective demonstrate that jazz has truly become an international language. Hailing from Ohio, Baltimore, Miami, Puerto Rico, Venezuela, and New Zealand, the Collective’s multi-cultural lineup mirrors the explosion of jazz talent around the globe. Murals by Sandow Birk and Elyse Pignolet in the upstairs lobby present a fictionalized cityscape of important jazz venues across the United States. One mural titled “Jazz and the City,” depicts storied San Francisco jazz clubs of years gone by. Completing the experience, Charles Phan’s South bar 7 grill is located at the SFJAZZ Center. It serves sustainable Mexican small dishes and refreshing tropical cocktails.
ADMISSION: Depending on concert seating, ticket prices range from $25-65
DAYS & HOURS: check website events calendar
ADDRESS: 201 Franklin Street, San Francisco MAP
RAPID TRANSIT: Muni Metro Van Ness Station
PARKING: garages at Grove between Franklin & Gough Streets and McAllister between Polk & Larkin Streets
PHONE: 415-788-7353
WEBSITE: https://www.sfjazz.org/

Asian Art Museum
DESCRIPTION: With so many Asian cultures represented in the city, one should not be surprised that this popular museum is the largest in the West devoted to Asian art. Within its 185,000 square feet, the historical art collection spans 6,000 years and represents cultures throughout Asia. Once you get beyond the exterior of the museum which still reminds you of its roots as the central library, its treasures inside will quickly reinforce that this is a world-class museum with enough unique and celebrated pieces of art to make the Louvre envious. In many ways, the changing exhibits are equally inspiring. The gift shop is a must visit for Asian art collectors. The structure is part of the Civic Center district, one of the nation’s most complete collections of beaux arts buildings set in a formal plan. The museum presents a broad range of special exhibitions and programs designed to reach all levels of education and awareness of art. AsiaAlive, the museum’s signature program, is an ambitious offering of live performances, artist demonstrations, and hands-on activities structured to engage visitors of all ages.
ADMISSION: Adults $10, Seniors with ID $7, College students with ID and Ages 13-17 $6, 12 and under FREE, Thursday evenings after 5p are $5, Target Tuesdays on the first Tuesday of every month are FREE
DAYS & HOURS: Tue-Sun 10a-5p and Thu until 9p
ADDRESS: 200 Larkin Street, San Francisco MAP
RAPID TRANSIT: BART-Muni Metro Civic Center Station
PARKING: plenty of garage space in the Civic Center underground plaza
PHONE: 415-581-3500
WEBSITE: http://www.asianart.org

Legion of Honor
DESCRIPTION: It is fitting that this museum looks like a French palace set on a grand estate, contain one of America’s finest collections of European paintings and decorative arts, ancient art from Greece, Rome, Egypt, and Mesopotamia, and 18th-Century English and French Porcelain; you can search their massive collection of digital images online which portray the Legion’s permanent collection; given its setting in Lincoln Park, many think of it as San Francisco’s most beautiful public museum. It was featured in Alfred Hitchcock’s Vertigo movie.
ADMISSION: Adults $10, Age 65+ $7, Ages 12-17 $6, Ages 11 and under enter FREE
DAYS & HOURS: Tue-Sun 9:30a-5p
ADDRESS: 100 34th Avenue, Lincoln Park , San Francisco MAP
RAPID TRANSIT: none
PARKING: in front of the museum
PHONE: 415-863-3330
WEBSITE: http://www.famsf.org

War Memorial Opera House
DESCRIPTION: San Francisco Opera is the second largest opera company in North America and has called this 3,176-seat opera house home since 1932. It is dedicated to veterans of World War I. Heralded for its first-rate productions and roster of international opera stars, the company’s season at least ten operas. It has thrived as a labor of love by thousands of patrons and volunteers over the years and by expanding its outreach programs via training programs and performance opportunities for young artists. Operas like Carmen, MacBeth, Madame Butterfly, and Samson & Delilah have stood the test of time at this distinguished venue.
BOX OFFICE: performance season September-July Mon 10a-5p, Tue-Sat 10a-6p
ADDRESS: 301 Van Ness Avenue, San Francisco MAP
RAPID TRANSIT: Muni Metro Van Ness Station
PARKING: plenty of garage space and paid lots nearby on Grove Street
PHONE: Box Office 415-864-3330
WEBSITE: http://www.sfopera.com

Yerba Buena Center for the Arts
DESCRIPTION: Features an incredible diversity of performing art, graphic art and art programs – a real treasure in the community. It emphasizes contemporary art by emerging artists and film festivals. This venue deserves props for its commitment to providing a platform for a diversity of voices, with a special emphasis on those that, for whatever reason, have been marginalized.
BOX OFFICE: Tue-Wed, Fri-Sun Noon-5p, Thu Noon-8p
ADDRESS: 701 Mission Street, San Francisco MAP
RAPID TRANSIT: BART-Muni Metro Powell Street Station
PARKING: garage behind San Francisco Museum of Art on 3rd Street across from Yerba Buena Gardens
PHONE: 415-978-2787
WEBSITE: http://www.ybca.org

Palace of Fine Arts
At first glance you would not guess that this magnificent monument has a troubled history. It was constructed for the 1915 Panama-Pacific Exposition to present works of art. Nine other palaces were constructed for the exhibition as well: Education, Liberal Arts, Manufactures, Varied Industries, Agriculture, Food Products, Transportation, Mines & Metallurgy and Machinery. When the exposition ended, the beloved Greco-Roman palace architecture palace was saved to house touring art exhibits. The other nine palaces were destroyed, enabling residential construction of the Marina District. From 1934-42, the palace hosted 18 indoor tennis courts. During World War II it was used for military truck & jeep storage. From 1947-64, the palace served as a Park Department warehouse, telephone book distribution center, flag & tent storage depot and temporary Fire Department headquarters. Not built of durable materials, the crumbling ruin was torn down in 1964. The beloved structure was rebuilt with permanent materials in 1965, plus a renovated lagoon and meandering walkways. In 1969, the Exhibit Hall became home to the Exploratorium interactive museum. In 1970, the 966-seat Palace of Fine Arts Theater opened as well. In 2013, the Exploratorium closed for its permanent move to the Embarcadero. Today, mature Eucalyptus trees and colorful bushes surround the lagoon, providing ample harbor to swans, ducks, geese, turtles, frogs and raccoons. In addition to hosting art exhibits, small plays and concerts again, the palace is a magnet for locals, tourists and wedding party photographs. The palace is listed on the National Register of Historic Places.
BOX OFFICE: check website
ADDRESS: 3301 Lyon Street, San Francisco MAP
RAPID TRANSIT: none
PARKING: on premises, but arrive early for concerts
PHONE: 415-563-6504
WEBSITE: https://palaceoffinearts.org