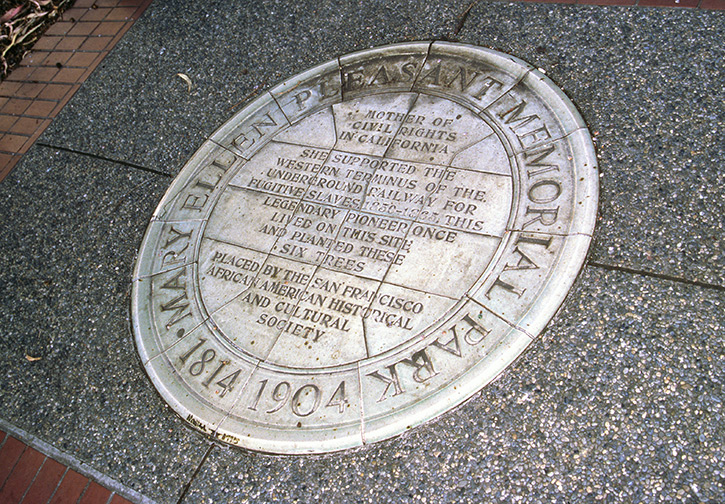 San Francisco’s historically black district was shared with Japanese-Americans until the latter were forced out during their racially-motivated 1942 internment of World War II. There was plenty of resistance to African-Americans moving anywhere but here and Bayview-Hunters Point, next to a Naval shipyard. With a vacuum created by Japanese-American internment, the African-American middle class, eager to expand into those Victorian homes, strengthening their presence in the social and business core of the Fillmore District.

Roughly bordered by Octavia, Divisidero, Bush and Duboce Streets, the Fillmore became the “Harlem West” in the 1940’s, as Jazz musicians such as Duke Ellington, Count Basie and R&B performers like Marvin Gaye, The Supremes, The Temptations and Aretha Franklin performed at the Fillmore Theater on a regular basis. Fillmore Street was similar to 125th Street in Harlem. Cadillacs and Lincolns would line up dropping off stars and those wanting to be seen with stars at the corner of Fillmore Street and Geary Blvd. Then the heavy hand of city redevelopment intervened.

By the numbers, the San Francisco Redevelopment Agency (SFRDA) led by Justin Herman was ugly and most concede, racially motivated. The predominantly black Fillmore District was declared blighted in 1948 and expanded to 60 square blocks by 1956. So unlike other parts of town where landowners and businesses could get improvement loans, commercial bankers were reluctant to invest in the Fillmore. Starved of improvement capital, seedy Fillmore businesses sprung up next to vibrant ones to further tarnish area reputation. By 1960, most of present day Japantown was razed. Instead of spending the $50 million of federal funds for true home and business redevelopment, The SFRDA employed imminent domain law, forcing landowners to sell at depressed prices. This horrific process destroyed 883 businesses and 2500 Victorian houses, and moved out 4,700 African American families. By 1964, much of Historically Black Fillmore District had undergone large scale demolition.

In a portion of the cleared land, high-rise and low-rise public housing was built. Predictably, the black middle class scattered to other parts of town. Others left for larger houses in Oakland Hills and Berkeley. By 1968, when the Fair Housing Act became national law, remaining middle class families leaving for the suburbs became a flood. Poorer families stayed in the Fillmore residential projects or moved to Bayview-Hunters Point in the southeastern tip of San Francisco. Once vibrant black businesses shuttered along Fillmore Street south of Geary Boulevard.

One thing the SFRDA got right was to open the Japanese Cultural & Trade Center in 1968 between Laguna and Fillmore and Geary and Post. Over the years it re-anchored Japanese culture and housing redevelopment in the northern part of the community.

By the 1970s, housing prices in San Francisco shot up. Higher prices presented a choice between gentrification for the Fillmore District south of Geary Boulevard or some other redevelopment approach that succeeded elsewhere. Other cities, notably Baltimore, employed an imaginative redevelopment program that attracted $1 of private money for every $1 dollar of public money invested.

Rewind. Imagine $50 million federal funds coupled with $50 million of private investment in the 1970s. That works out to an average of about $30,000 in low interest loans for 3,383 businesses and Victorian houses that could have been rebuilt when prices were relatively cheap, instead of public housing. A large park area could have been created as well. A new black urban middle class could have joined the last remaining black middle class moved out. Of course other cultures would also have moved in over time, but it would have happened more organically to preserve the rich heritage of the district, just as Italian heritage is preserved in North Beach despite integration. San Francisco would have had another strong tourism district, better schools in the area and a lower crime rate. Instead, it missed a second opportunity for the Fillmore District revival.

The good news is that Willie Brown, San Francisco’s first black mayor (1995-2003), called in a lot of chips to help revive a Fillmore Entertainment District. Sparked by re-opening of the Fillmore Theater, Rasselas jazz club, Sheba’s Piano Lounge, 1300 Fillmore and Yoshi’s, a partial revival has occurred. How the story ends is one for debate.