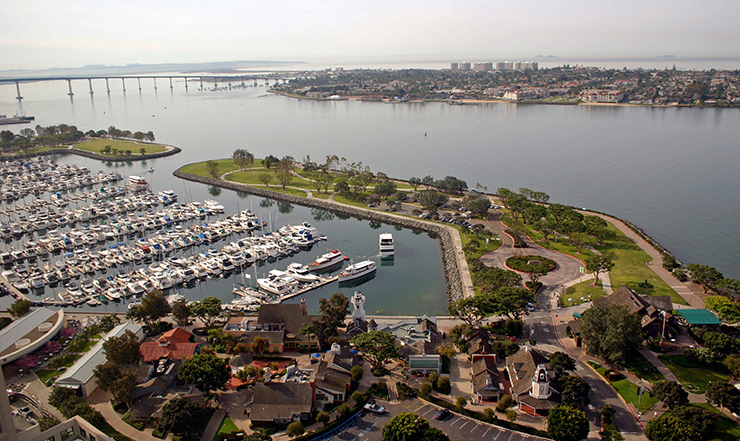 Gaslamp Quarter
DESCRIPTION: The history of this colorful district dates back to a 19th Century waterfront home built by a wealthy San Franciscan. William Heath Davis. He hoped to trigger a real estate boom. Unfortunately for Davis, an economic depression caused his venture to fail and his town became known as Rabbitville, named after its principal inhabitants. Over the years, it filled in unevenly with grand hotel next to boarding houses and other dives. In 1887, up to 350 prostitutes worked the local bordellos with sailors, businessmen and politicians as primary patrons. In the early 1900s, the area became home to the largest settlement of African-Americans in San Diego. The quarter went through another rough period until World War II, when thousands of sailors headed to the Pacific Theater from San Diego. After the war, the area hit another economic lull until the Vietnam War. Then in 1980s, citizens finally began a planning to permanently upgrade the area with numerous office, dining, entertainment, attraction, residential developments. Today, the Gaslamp Quarter enjoys a marvelous rebirth and frequent events.
ADMISSION: free
DAYS & HOURS: dawn until late night
ADDRESS: bounded by G Street, 3rd Ave, Harbor Drive and 6th Avenue, San Diego, CA MAP
PARKING: numerous paid lots; but they fill up fast during a baseball game
RAPID TRANSIT: Gaslamp Quarter Station
PHONE: 619-233-5227
WEBSITE: http://www.gaslamp.org

Old Town
DESCRIPTION: Old Town San Diego is considered the birthplace of the State of California. In 1769, Father Junipero Serra established the first mission in a chain of 21 missions that were cornerstones for Anglo-American colonization of California. Father Serra’s Mission and Presidio were built on a hillside overlooking Old Town. At the base of the hill in 1820’s, a small Mexican community of adobe buildings was formed. By 1835, the town attained the status of El Pueblo de San Diego. In 1846, the American flag was raised in the Old Town. Today, the area is designated a state historic park and mission. Tourists are attracted by the lively Mexican-themed restaurants, bars, gift shops and a small theater. There’s something going on day or night at this must-see San Diego general attraction. Don’t want to drive here? Hop on the convenient San Diego Trolley from Downtown to Old Town.
ADDRESS: bounded by Juan Street, Taylor Street, Congress Street and Old Town Avenue, San Diego, CA
PARKING: street and paid lots
RAPID TRANSIT: Old Town Station
PHONE: 619-291-4903
WEBSITE: http://www.oldtownsandiego.org