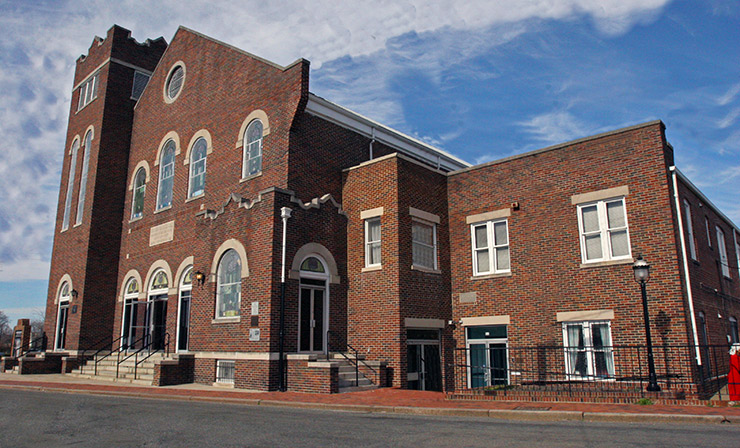 Third Street Bethel AME Church
DESCRIPTION: Founded 1857, hosted the Virginia Conference of the AME congregation in 1867 and remodeled in 1875. Along with St. John’s AME in Norfolk, it is considered one of the two most historic AME churches in Virginia.
SUNDAY WORSHIP: 11a
ADDRESS: 614 North 3rd Street, Richmond, VA MAP
PHONE: 804-643-8157
WEBSITE:

Richmond Slavery Reconciliation Statue
DESCRIPTION: Unveiled in 2007, the statue depicts two people melded in an embrace, near the former slave market in Shock Bottom. A linchpin of Richmond’s Slave Trail, the statue is part of a “sister city” project with Liverpool England and Benin, West Africa for their three-way reconciliation for participating in slavery.
ADDRESS: 15th and East Main Streets Plaza, Richmond, VA MAP
PARKING: paid lots nearby

Maggie L. Walker Historic Site
DESCRIPTION: Walker (1867-1934) was born to a former slave and white abolitionist; she expanded the Independent Order of St. Luke Benevolent Burial Society to own a department store, newspaper (she was editor), and a bank in 1903; in the process she became the first woman in the US to found a bank, St. Luke Penny Savings Bank. She worked with W.E.B. Du Bois on the board of the NAACP and with Mary McLeod Bethune on the board of the National Association of Colored Women. This two story, 25 room brick row house was her residence from 1904 until her death; wheelchair accessible
DAYS & HOURS: Wed-Sun 9a-5p
ADDRESS: 110 East Leigh Street, Richmond, VA MAP
PARKING: on street
PHONE: 804-771-2017

Elk’s Lodge
DESCRIPTION: Opened 1905, this 26 room mansion was built for the Rev. WL. Taylor, a leader in the United Order of True Reformers. It was designed by African American architect, J A Lankford. His home was one the largest buildings in Virginia built for an African American; it later became an Elk’s lodge.
ADDRESS: 526 North 2nd Street, Richmond, VA MAP

First Battalion Armory of Virginia Volunteers
DESCRIPTION: Built in 1899, it’s the oldest armory built for African Americans in Virginia and headquartered the city’s first African-American regiment dispatched to the Spanish-American War. For a period after the war in the early 20th century, it was converted into a school.
ADDRESS: 122 West Leigh Street, Richmond, VA MAP
PARKING: on street

William Washington Browne Residence
DESCRIPTION: Browne came to Richmond in 1881 to pastor Leigh Street ME Church and to promote the United Order of True Reformers; although he died in 1897, Browne’s leadership helped increase the Order’s membership which peaked near 120,000 shortly after his death.
ADDRESS: 105 West Jackson Street, Richmond, VA MAP
PARKING: on street

The Trail Of Enslaved Africans
DESCRIPTION: On the nightly tour led by Elegba Folklore Society, participants are roped together as slaves and walk at night (when slaves were brought to Manchester Dock for sale so as not disturb Southern gentility) along the woods and riverfront of this Slave Trail. The trail runs through historic sites such as Lumpkin Slave Jail and the canal auction houses; there is also a monument to Henry “Box” Brown at the canal, Reconciliation Statue and African Slave burial ground on the trail.
ADDRESS: Trail starts at Ancarrows Landing, Richmond, VA MAP