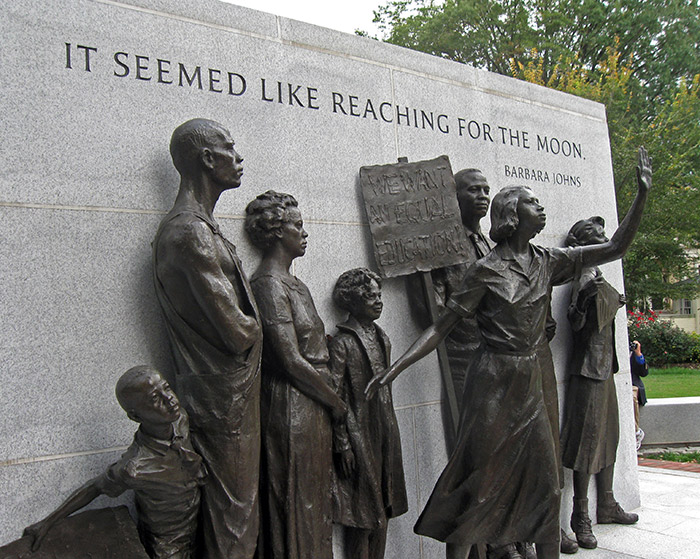 Black History Museum and Cultural Center
DESCRIPTION: Founded in 1981 by Carroll Anderson. Housed in a Neo-Classical style structure built in 1832 and purchased by Maggie L. Walker in 1922. In 1932, the building became the African American branch of the Richmond Public Library. In 1991, it was converted to a museum and cultural center for visual, oral and written records and artifacts commemorating the lives and accomplishments of African Americans in Virginia from their arrival in 1619 to present.
ADMISSION: Adults: $5, age 60+ $4, age 12 and under $3
DAYS & HOURS: Tue-Sat 10a-5p, Sun 1p-5p
ADDRESS: 122 West Leigh Street, Richmond, VA MAP
PARKING: on street
PHONE: 804-780-9093
WEBSITE: http://www.blackhistorymuseum.org

Elegba Folklore Society
DESCRIPTION: Founded 1990 by Janine Bell, this art organization programs African American cultural events, including Juneteenth Celebration and Down Home Family Reunion in August. From West African tradition we learn that “Elegba” loosely means, “With one face in the spirit world and the other in the earthly world, he is the divine messenger of destiny who keeps us connected.” Off-site exhibitions feature traveling shows or can offer exclusive viewings or purchase opportunities for your audience. On-site, the cultural center is open for individual visitors or tour groups. Craft making and art making classes are available. Subject matter includes fabric painting and design, jewelry making and doll making, plus just for children, self-portraits and paper mache mask making.
DAYS & HOURS: Mon-Fri 10a-6p, but dependent on volunteers
ADDRESS: 101 East Broad Street, Richmond, VA MAP
PARKING: on street
PHONE: 804-644-3900
WEBSITE: http://www.efsinc.org

Virginia Civil Rights Memorial
DESCRIPTION: Dedicated in 2008, the memorial commemorates organized protests that helped bring about school desegregation in Virginia and America. It features 18 statues of leaders in the Civil Rights Movement on four sides of a rectangular granite stone block onto which are carved quotes. The memorial was designed by Stanley Bleifeld and financed by private donations. The memorial’s plaque describes the struggle for integration of Virginia schools. R.R. Moton High School, an all-black high school in Farmville, Virginia, who suffered from terrible conditions due to underfunding. Teachers and students did not have desks or blackboards, some students had to take classes in a decrepit school bus. Requests for additional funds were denied by the all-white school board. In response, on 23 April 1951, a 16-year-old student named Barbara Johns covertly organized a student strike. She forged notes to teachers telling them to bring their students to the auditorium for a special announcement. When the school’s students showed up, Johns took the stage and persuaded the school to strike to protest poor school conditions. Over 450 walked out and marched to the homes of members of the school board, who refused to see them. Rev. Francis Griffin organized parents in support of the strike and encouraged the students to contact NAACP lawyers Oliver Hill and Spottiswood Robinson. Those two civil rights lawyers brought suit against the school board: Davis vs. County School Board of Prince Edward County, which was eventually one of the 4 cases combined into Brown vs. Board of Education heard by the U.S. Supreme Court in 1954. That Supreme Court decision officially overturned racial segregation in U.S. public schools.
ADDRESS: Virginia State Capitol grounds, Richmond, VA MAP

Bill “Bojangles” Robinson Monument
DESCRIPTION: Born on North 3rd Street, Robinson appeared in the first African American talking picture. Robinson achieved his greatest popularity in movie roles featuring his famed staircase dance routines dancing with Shirley Temple in six films. To Bojangles and Shirley’s credit they always pushed his character to display more dignity than movie scripts and directors intended. Nevertheless, Robinson got feed up with the Hollywood system for not expanding his roles to that of dignified, non-servile characters and left movies for a number of years until his demand was met. A humanitarian, Robinson paid for the traffic light at this intersection after a child was injured crossing. William “Bill” is a name he assumed from his brother.
ADDRESS: Adams and West Leigh Street, Richmond, VA MAP
PARKING: on street

Virginia Fire & Police Museum
DESCRIPTION: Established 1849, its one of the nation’s oldest firehouses on the National Register of Historic Landmarks. Today it houses antique fire fighting equipment and records of African American Engine Company No. 9, which began in 1950 and was noted inside and outside Jackson Ward for its bravery; exists as a part time gallery.
ADDRESS: 200 West Marshall Street, Richmond, VA MAP
PARKING: on street
PHONE: 804-644-1849
WEBSITE:

Arthur Ashe Monument
DESCRIPTION: Scholarly Arthur Ashe, Jr. (1943-1993) was born and spent most of his childhood in Richmond, though he spent later years in St Louis and at UCLA honing his tennis skills. 1975 Wimbledon tennis champion and member of the Davis Cup Team. When dedicated, this monument raised a controversy with old guard Richmond because it placed a monument of Ashe in the posthumous company of Confederate general statues on Monument Street. Fortunately, Richmond’s leaders were bigger than such a slight when they stuck to this location and honored an exemplary native son, writer, humanitarian and international activist.
ADDRESS: Monument Ave at Roseneath Road, Richmond, VA MAP
PARKING: on street