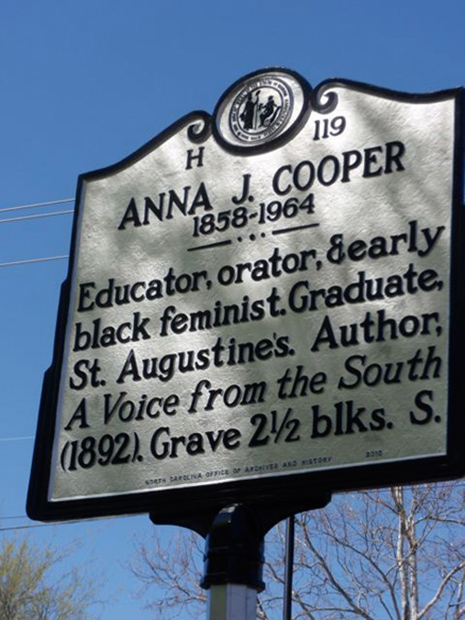 Peace College Main Building
DESCRIPTION: Although it was a Presbyterian school in earlier days, this Greek Revival building served as the Freedmen’s Bureau headquarters for the state in 1865-1872. The bureau helped newly freed African Americans get jobs, education and housing opportunities. Later, it became a female seminary and is now on the National Register of Historic Places.
ADDRESS: 15 East Peace Street, Raleigh, NC MAP
PHONE: 919-508-2000
WEBSITE: http://www.peace.edu

Estey Hall
DESCRIPTION: Built in 1873, it is the first building constructed for the higher education of black women in the United States and the oldest surviving building on Shaw University campus. This seminary for Negro Girls at Shaw Collegiate Institute remained as a women’s dorm until 1968. It was abandoned in 1970, then refurbish many years later. Estey is listed on the National Register of Historic Places.
ADDRESS: 118 East South Street, Raleigh, NC MAP
PHONE: 919-546-8200
WEBSITE: https://www.shawu.edu

Leonard Medical Building
DESCRIPTION: Located on the Shaw University campus, Leonard Medical School was the first four-year medical school in North Carolina. Founded in 1881 and named for Judson Wade Leonard, brother-in-law to Shaw’s founder Dr. Henry Martin Tupper, the medical school closed in 1918, but the building has been renovated for other use.
ADDRESS: South Wilmington Street near MLK Avenue, Raleigh, NC MAP
PHONE: 919-546-8200

Masonic Temple Building
DESCRIPTION: Built in 1907, the Masonic Temple served as a leading office building for black professionals for more than a half-century. Its proximity to other black institutions, businesses and neighborhoods helped create a close-knit community in Southeast Raleigh. It is on the National Register of Historic Places.
ADDRESS: Blount Street at East Cabarrus Street, Raleigh, NC MAP
PHONE: 919-834-5191

Rogers-Bagley-Daniels-Pegues House
DESCRIPTION: One of the few surviving pre-Civil War houses in Raleigh, this two-story Greek Revival frame building was built in 1855. It was home to three prominent owners before being sold to its first African American occupant in 1919, Albert W. Pegues, Dean of Theology at Shaw University. It is listed on the National Register of Historic Places, now owned by Shaw University and was renovated as an entertainment facility.
ADDRESS: 125 East South Street, Raleigh, NC MAP
PHONE: 919-546-8200

St. Agnes Hospital
DESCRIPTION: Founded by Sarah Hunter, wife of Saint Augustine’s fourth principal, the original 1895 building housed the only nurse teaching hospital for blacks between Atlanta and Washington, DC. Some decades ago, it was severely damaged by fire. Students quarried stone and started the current building in 1905 under the direction of the Rev. Henry Beard Delany. It became a 75-bed center that opened in 1908. It is now an administrative center for the college.
ADDRESS: 1315 Oakwood Avenue, Raleigh, NC MAP
PHONE: 919-516-4000
WEBSITE: https://www.st-aug.edu

St. Augustine’s University Historic District
DESCRIPTION: Located on a 100-acre campus, the school was incorporated in 1867 by the Protestant Episcopal Church to serve freedmen by educating teachers of black students. In 1928, the school became a four-year institution. Saint Augustine’s now offers programs in 38 academic disciplines and is among the nation’s 117 historically black colleges & universities. It is on the National Register of Historic Places.
ADDRESS: 1315 Oakwood Avenue, Raleigh, NC MAP
PHONE: 919-516-4000
WEBSITE: https://www.st-aug.edu

South Park Historic District
DESCRIPTION: Raleigh’s largest African American neighborhood formed during Reconstruction Era (1865-77), when freedmen located in Raleigh to take advantage of inexpensive land and institutions like Shaw University. It is listed on the National Register of Historic Places. A portion of the district is named in honor of World Heavyweight Boxing Champion, Joe Louis.
ADDRESS: 48 blocks east and southeast of downtown Raleigh, NC MAP

Washington High School
DESCRIPTION: The school was completed in 1924 as the first public high school for African Americans in Raleigh. It is an architecturally important reminder of race and education in North Carolina in the 1920s. It is presently used as a magnet elementary school.
ADDRESS: 1000 South Fayetteville Street, Raleigh, NC MAP
PHONE: 919-856-7960