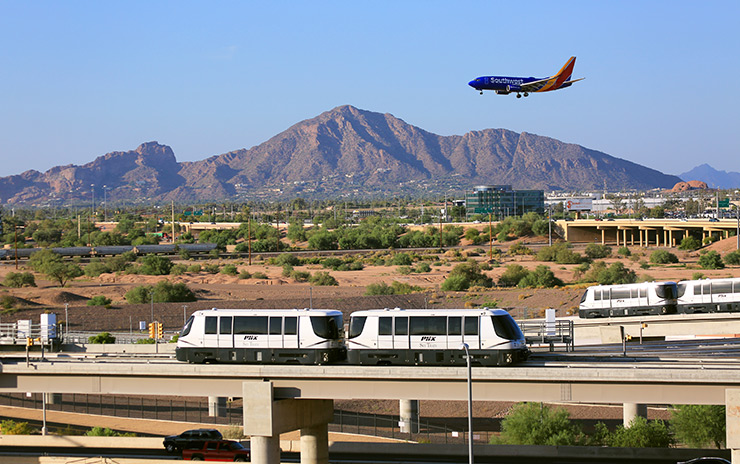 Phoenix Sky Harbor International Airport (PHX) is one of the 10 busiest airports in America. Plenty of flights go to all points across North America. Hotel shuttles and Taxis are plentiful and cheap from PHX Airport to downtown Phoenix, only a few miles to the north. Car Rentals: Alamo, Avis, Budget, Dollar, Enterprise, Hertz, and National serve PHX, is just minutes east of downtown.

Amtrak station at 401 South 4th Avenue, Maricopa, AZ, which is a Phoenix suburb. Sunset Limited is limited. It runs every other day in this corridor:

Valley Metro Light Rail is a 26-mile route that connects to the Airport People Mover, major attractions downtown, east and north Phoenix, Tempe and Mesa. Phoenix is expanding the light rail system in all directions over the next 10 years. VALLEY METRO SYSTEM MAP

A free DASH bus circulates around downtown Phoenix every 6 to 10 minutes.