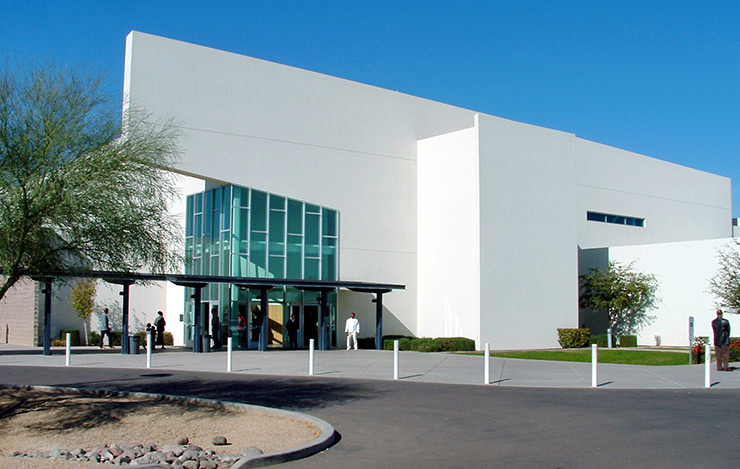 Phoenix Union Colored High School
DESCRIPTION: Although the state did not mandate segregated schools, increasing hostility towards African Americans led the community to build the school in 1926 it was Arizona’s first Black high school. The name George Washington Carver High was adopted in 1943 in honor of the great inventor. Integration of the Arizona school system led the facility to cease operation as a school in 1955. Today, this building on the National Register of Historic Places also home to the George Washington Carver Museum and Cultural Center.
DAYS & HOURS: Mon-Fri and third Saturday of the month 9a-3p
ADDRESS: 415 East Grant Street, Phoenix, AZ
PHONE: 602-254-7516

Swindall House Site
DESCRIPTION: Original site of the only hotel where African American athletes and performers were allowed to stay during the Jim Crow Era; Ella Fitzgerald, Joe Louis, Louis Armstrong and Jackie Robinson were among the many notable guests; the building was raised some years ago.
ADDRESS: 1021 East Washington Street, Phoenix, AZ

First Institutional Baptist Church
DESCRIPTION: Two Baptist churches were organized in Arizona in the early 1900s – one in Bisbee and the other in Douglas; the pastor of these churches was John B. Bell, a missionary called to minister to the Indian population and the cowboys. Arriving in Phoenix in 1905, Pastor Bell united with the founding fore-parents and organized the Second Baptist Church Sunday School that year. Today, the church stands as the oldest Black Baptist church in Phoenix.
SUNDAY WORSHIP: 7:15a & 10:45a
ADDRESS: 1141 East Jefferson Street, Phoenix, AZ
PHONE: 602-258-1998
WEBSITE: http://www.fibcaz.org

Lincoln Ragsdale Executive Air Terminal
DESCRIPTION: Named after Dr. Lincoln J. Ragsdale, Sr. (1926-1995), a leading activist in the battle for Civil Rights in Arizona. Ragsdale’s pioneering accomplishments were many including becoming one of the first Black pilots to serve at Luke Air Field in Litchfield Park, Arizona after graduating in 1945 from Tuskegee flying school. He had leadership roles in the Greater Phoenix Council for Civic Unity, the local NAACP and the Phoenix Urban League. His desegregation efforts in Phoenix include Phoenix high schools in 1953 and the Encanto District, Phoenix’ most affluent and segregated neighborhood. In later years, his successes included General Electric, Motorola, Sperry Rand and other influential corporations in Phoenix. Over the next 30 years, he is credited with continual efforts towards diversity in Phoenix’s public and private sectors and for entrepreneurial opportunities for people of color in Arizona. Fortunately, Ragsdale lived long enough to witness the creation of the Martin Luther King holiday in Arizona by popular vote in November of 1992. While in the terminal, visit the lobby plaque of this visionary leader.
ADDRESS: Phoenix Sky Harbor International Airport, Phoenix, AZ
PHONE: 602-273-8874