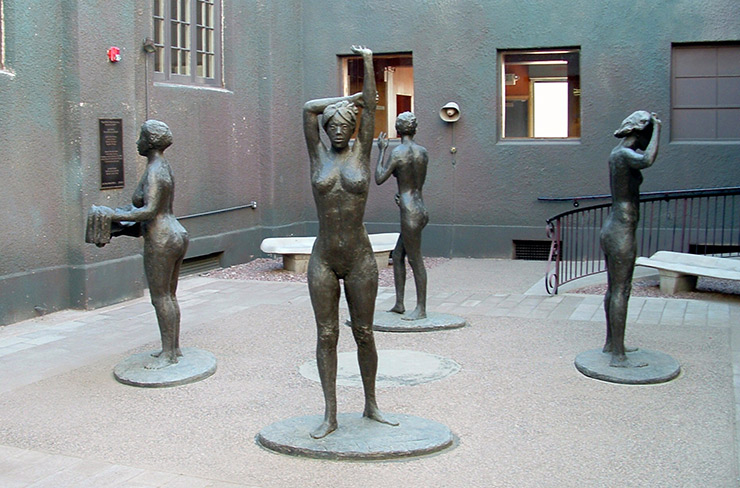 That Which Might Have Been Monument, George Washington Carver Museum & Cultural Center; (c) Soul Of America

George Washington Carver Museum & Cultural Center
DESCRIPTION: Housed in the historic Phoenix Union Colored High built in 1926, the George Washington Carver Museum and Cultural Center relates the life, challenges, and triumphs of Phoenix’s African-American community. Visitors will find a wide variety of galleries and exhibits relative to African American art, culture and history including Black pioneers, prominent local and national African American personalities, military heroes, sports achievements, religious influences and works of art, plus a library specializing in African-American subjects. One of the most striking exhibits here is the sculpture garden which contains numerous poignant bronze sculptures entitled “That Which Might Have Been, Birmingham 1963,” a memorial to four little girls killed in a Birmingham church bombing. In front of the building another sculpture showcases the larger than life-sized statue of Dr. George Washington Carver.
DAYS & HOURS: Mon-Fri and third Saturday of the month 9a-3p
ADDRESS: 415 East Grant Street
PHONE: 602-254-7516
WEBSITE: http://www.gwcmccphx.org

Eastlake Park Civil Rights Memorial
DESCRIPTION: Purchased by the city of Phoenix in 1914, Eastlake Park was originally developed in the 1890’s by Arizona businessman Moses Sherman to give passengers of his tram line a pleasant place to spend time while waiting for the next tram; although trams no longer run through the park and the lake has disappeared, the park was a significant site for civil rights rallies and the starting point of all civil rights marches to the Capital; until it grew too large to continue to here, the park was the home of the Martin Luther King Jr. Birthday Celebration and is still the home to the Juneteenth Celebration. Its also a community focal point for contemporary sports programs, educational classes, dance and exercise classes.
DAYS & HOURS: daily during daylight hours
ADDRESS: 16th and Jefferson Streets, Phoenix, AZ
PHONE: 602-495-0196
WEBSITE: http://phoenix.gov/PARKS/easthist.html