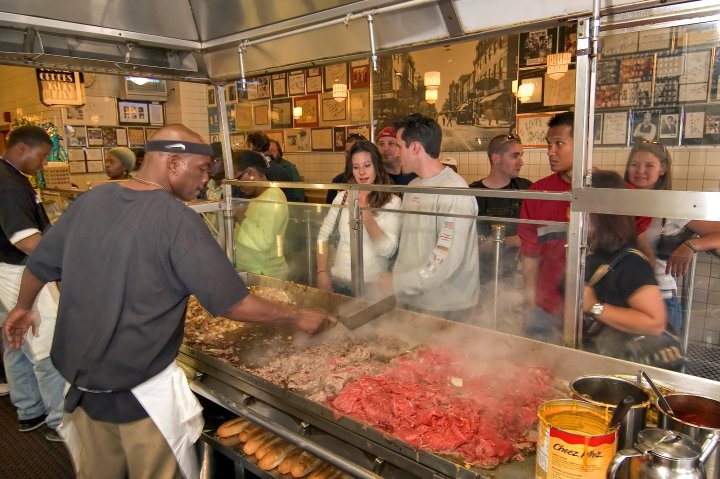 Philadelphia Cheesesteak or “Philly Cheesesteak”, is simply a sandwich principally made up of thinly sliced pieces of steak and melted cheese on a long, lightly-baked hoagie roll. Many patrons ask that the foot-long roll be cut in half to serve a more reasonable portion. Some patrons eat two! Excuse us McDonalds. With so many cafes and delis serving Philadelphia Cheesesteak around town, it’s the unofficial fast meal of choice. If you can imagine one of those magnificently decadent goodies in your hand, you may have a casual interest in what comes next.

Most historians credit Pat and Harry Olivieri with inventing the Philadelphia Cheesesteak. In the 1930s, they began serving thinly chopped steak on hoagie rolls at their hot dog stand in South Philadelphia. Adding melted cheese was just an option. Customers loved ’em. They became so popular, Pat opened up his own steak restaurant shortly afterwards. For many years, Pat simply called it a “steak sandwich” not a “cheesesteak”. But as the years passed, Pat eventually yielded to customer demand and “cheese” was added to “steak.” His restaurant still operates today as Pat’s King of Steaks. 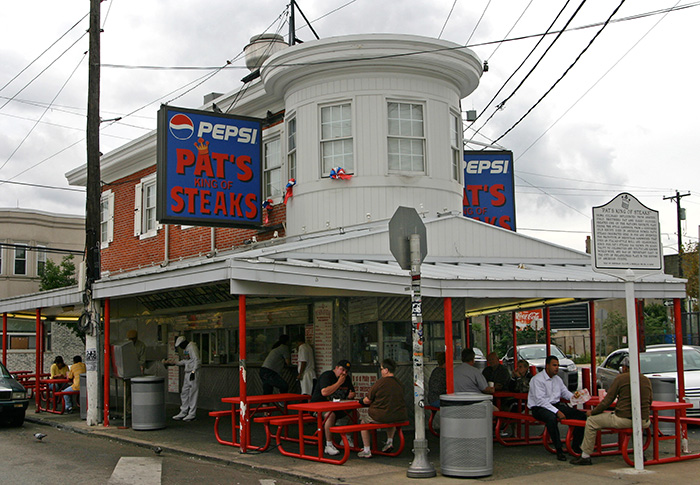 The growth of Philadelphia Cheesesteaks accelerated when Cheez Whiz hit the market marketed in 1953. Cheese Whiz consists of soft American, Provolone, Swiss, Cheddar, or Mozzarella cheese that can easily be dipped and lathered on freshly cooked, thin-sliced steak already placed in the hoagie roll. The cheese melds to steak and roll, but its best to eat while warm. The availability of Cheese Whiz nationwide, made it easy to export a key ingredient of nationwide, so restaurants, ex-Philadelphians or customers could make their own versions of the now famous Philadelphia Cheesesteak.

Today, various celebrity chefs recommend other fancy cheeses and a hint of spices in their Philadelphia Cheesesteak. But fear not, the original served in South Philadelphia restaurants remains the best – others may taste good, but they are a derivative. We highly recommend visiting Pats King of Steaks, Geno’s Steaks, and Jim’s Steaks on 400 South Street, which often have lines of patrons waiting to order.