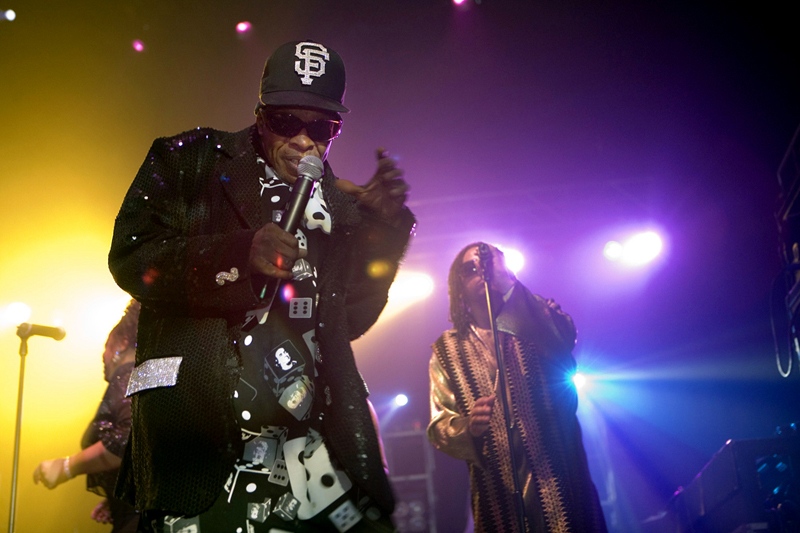 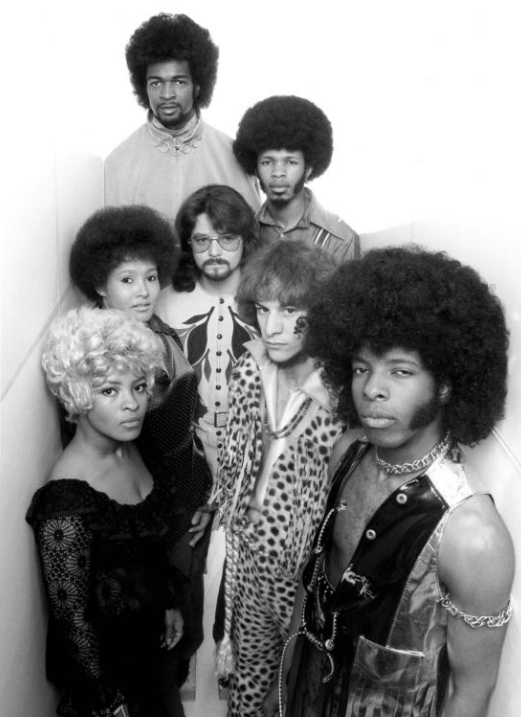 As the reputation of the Fillmore District grew, so did its need for a larger performing arts venue. The Fillmore Auditorium at the corner of Fillmore and Geary fit the bill nicely. Its eventual progressive-minded owner Bill Graham welcomed every type of performing artist to keep it filled with patrons. The Supremes, Temptations, Smokey Robinson, Marvin Gaye, Gladys Knight, other R&B, Jazz, and Blues artists too numerous to name have performed and recorded at the famed Fillmore. But none could claim it home more than Sly & The Family Stone. The Bay Area’s home grown band rocked the house before their fame outgrew it.

Sly Stone was born Sylvester Stewart in 1941 in Denton, Texas, but grew up in nearby Vallejo, California. His mother and father, a reverend in the Church of God in Christ, in Vallejo gave the family of boys and girls their spiritual foundation and established their gospel roots as The Stewart Four (Sylvester, Rose, Vet and Freddy) in 1952.

While studying music at Vallejo Junior College, Sly played in several groups in the San Francisco Bay Area including producing the hit single C’mon and Swim for Bobby Freeman in 1964. Proceeds from that hit enabled Sly to move his siblings to San Francisco where he worked as a singing shock jock at R&B radio stations KSOL and KDIA. Top athletes and celebrities often visited his show. Sly also worked for Autumn Records in the SF Bay Area and produced several Bay Area bands.

In 1968, they released their second album, Dance To The Music, which gave them a Top Ten hit with its title track and elevated them to bigger gigs nationwide. They also shared the bill with Jimmy Hendrix Experience for many gigs.

After a lukewarm 3rd album, their 4th album in 1969 “Stand!” stayed on the charts over 100 weeks. It gave us the uplifting Funk standards including the stunning Don’t Call Me Nigger, Whitey. The song let the world know this was a group representing the voice and concerns of a new generation.

Sly’s star ascended so brightly and influenced so many musicians that it can be argued his group invented the R&B derivative, Funk, before Parliament-Funkadelic. He also appeared frequently on the biggest TV talk show of its day, The Mike Douglas Show. One of the bands’ best appearances was at the legendary Woodstock Festival in 1969. You may recall these standards:

Family Affair
Dance To the Music
You Caught Me Smiling
Stand
Hot Fun In The Summertime
Don’t Call Me Nigga, Whitey
I Want To Take You Higher
Sing a Simple Song
Everyday People
You Can Make It If You Try
Everybody is a Star
Thank You (Falettinme Be Mice Elf Agin)

By 1970, Sly Stone became infamous for arriving late for his concerts or not appearing at all. Nevertheless, the 5th album There’s A Riot Going On, reached number one in 1971. With so many missed dates caused by Sly not showing up due to drug addiction, growing tensions led Larry Graham and Greg Errico to exit the group. Every subsequent Sly & The Family Stone album would see several musician changes and diminishing sales and creative success, see http://www.slystone.com

Though his life was spiraling downwards in his battle with drug addiction, Sly spun off the group Lil Sis featuring his younger sister Vet Steward before he disappeared from the music scene. For Sly & The Family Stone fans, History of Sly & The Family Stone book by Steve Reese is a must read. Steve Reese as husband of Lil Sis (Vet Stewart) has a summary of the backstory at http://www.slyslilsis.com/intro.htm.