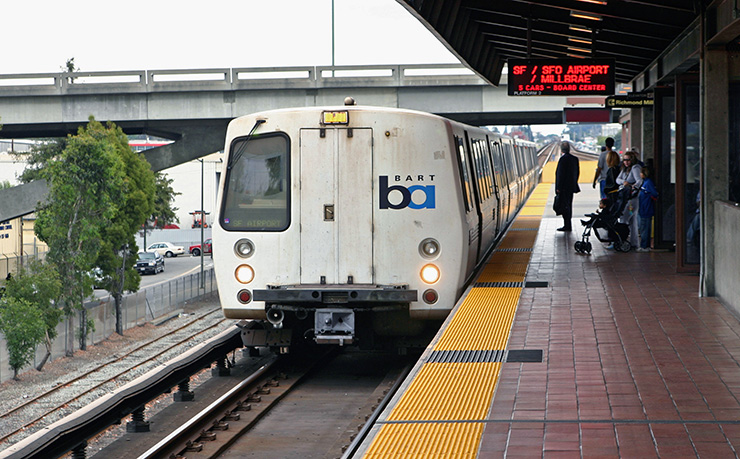 San Joaquin and Capitol Corridor are two of the most popular Amtrak lines outside the Northeast Corridor. They run multiple times daily and feature a food cabin and WiFi service on board. Coast Starlight and California Zephyr are long distance trains that run once daily.

Opened in 1972, BART (Bay Area Rapid Transit) has expanded to a 109-mile, 46-station Heavy Rail system that runs underground, under San Francisco Bay, and on elevated track that are never disrupted by auto traffic. Its electrified 3rd rail provides enough juice for trains to reach 80 mph under the bay, when needed. BART trains carry 435,000 weekday commuters in 4 to 10-cabin trains in 5-15 minute intervals, depending on commute hour. Though spacious otherwise, four downtown San Francisco stations get very crowded during commute hours. Since the freeways and toll bridges are more congested during commute hours, BART is the preferred way to ride between San Francisco, Oakland, Berkeley, Fremont, Richmond, Walnut Creek and SFO Airport. Bicycles are permitted on BART during the mid-day, night hours and weekends. Since station floors are even with train floors and each station has elevators, BART is wheelchair accessible. BART SYSTEM MAP

Fares are distance-based and seem appropriate for miles traveled. If you are familiar with transit ticket dispensers in the NYC, Washington, Boston or Chicago, you’ll easily grasp the same for BART ticket dispensers. BART hours of operation are:

When the 1989 Earthquake disabled San Francisco-Oakland Bay Bridge and a double-deck Oakland freeway, the undamaged BART system was only shut down for a hour =-long safety check, then continued running. Without BART, a massive number of San Francisco jobs would have ended until bridge repairs completed many months later. To combat wear & tear, BART is repairing original stations and replacing old train cabins with new, quieter ones. In 2018, a 10-mile BART extension south of Warm Springs to Milpitas and Berryessa in North San Jose opens.

San Francisco-Oakland Ferry is by far, the best eye-candy way to travel from Oakland to San Francisco. The ferries are frequent and provide break-taking views of the San Francisco Bay. If you pay for round-trip, you’ll cruise past Alcatraz and around Angel Island before returning to Oakland Jack London Square. Routes are:

Roots & Vines Wine Tours
DESCRIPTION: Full-day private bus tours to Napa, Sonoma, or Livermore Valleys in a relaxed, informative, and interactive setting; discover the best of California wineries and wine. The tour starts with breakfast included at an Oakland restaurant, then departs at 10am and returns at 6pm. Dress in layers if you are unsure about the day’s weather, but note that summer in Wine Country tends to hot. These experienced tour provideers say the best seasons for tour are spring and fall.
PRICING: $139 per person; 8 patron minimum, 22 patron maximum
ADDRESS: Oakland; contact tour organizer for place of meeting details, as it it often at a breakfast restaurant like Coffee With A Beat
PHONE: 510-881-8865
WEBSITE: http://www.rootsandvines.com