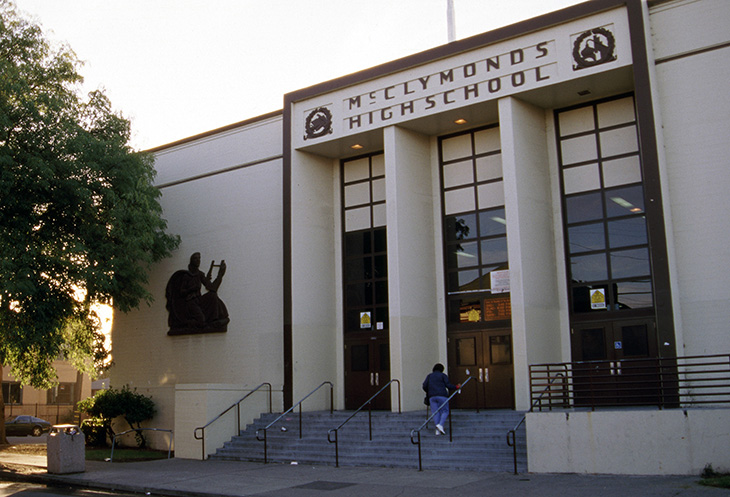 Founded in 1820, Oakland was the Pacific terminus of the first transcontinental railroad and held its position as the most important rail terminus for nearly 100 years. Small numbers of African Americans first settled in West Oakland at that time and even more so after the gold Rush of 1849, looking for a better life. Though they benefited from much improved living conditions compared to the South, they did not escape discrimination. African-Americans were banned from most trades, better government jobs and unfettered access to housing. As in San Francisco, such practices set the stage for a persistent black underclass in the region.

As America became a manufacturing power, Oakland’s train terminus at the port allowed it to develop as a major cargo exporter. Yet by 1940, only 16,000 African-Americans lived in the Bay Area, and most of those lived in San Francisco. The population mix changed dramatically as a result of World War II. Anglo-American worker shortage at Bay Area naval shipyards and the federal government finally opening those jobs to African Americans drew immigrants from Mississippi, Alabama, Louisiana and Texas to settle primarily in Oakland and Richmond. Huge numbers of Mexican and Asian immigrants came after the war.

By the 1950’s, a booming Black cultural district developed in West Oakland, while middle class African Americans began moving into East Oakland. At that time, McClymonds was essentially a Black high school. Black-owned restaurants, nightclubs and small businesses lined 7th street before its exact path was snatched away to become the city’s backbone freeway and the BART transit system. Though the city built a major postal center in its place, the district never restored its Black entrepreneurial class lost for the sake of regional progress.

As the African American population in San Francisco decreased in the early 1970s, San Francisco’s loss became Oakland’s population gain. Oakland became the Black cultural nexus in the Bay Area and seems comfortable with that role as African-Americans became the largest ethnic group in the city. It elected Lionel Wilson as its first Black mayor, then years later, Elihu Harris as its second. Although both mayors expanded opportunity for all people of all color, natural forces, bad politics and bad luck tainted the Elihu Harris legacy.

The huge 1989 Earthquake leveled a critical portion of Oakland’s backbone freeway, Interstate 880. The impact of its devastation can’t be understated, since I-880 was the main artery between Oakland’s cargo port, Jack London Square, Downtown and San Francisco. Furthermore, the quake severely damaged older downtown buildings, forcing many otherwise thriving businesses to shutter. Though under-reported, the loss of city tax revenue and reduced transportation convenience short-circuited many city and state plans to redevelop a cultural and shopping core in West Oakland. These were massive body blows to be sure.

A victim of the weak mayor/strong city mangers governmental structure, public officials mismanaged the Oakland Raiders Football team return, while under-funding public schools. Mayor Harris was the easiest public figure to blame, though he did not play a part in the bungling. But he did lack the political leverage to “deliver more of the goods” from the $2 billion freeway reconstruction project. Only 1% of the Interstate 880 freeway reconstruction jobs went to West Oaklanders, the area most devastated by the 1989 earthquake and most chronically unemployed. Lastly, Harris must have had bad Karma, since the “Ebonics” public relations fiasco during his administration did not help the city’s image either.

By the late 1990s, most Oakland voters were ready for a change, any change. Enter enigmatic former-governor and radio talk show host, Jerry Brown became mayor before moving on to governor again. He received mixed reviews from the community, but was been good or lucky at reviving downtown business. Under his watch more companies, state and federal government offices, the University of California headquarters, and many retail shops opened downtown. More hotel space appeared and Jack London Square is healthier than ever, sans the iconic Barnes & Noble.