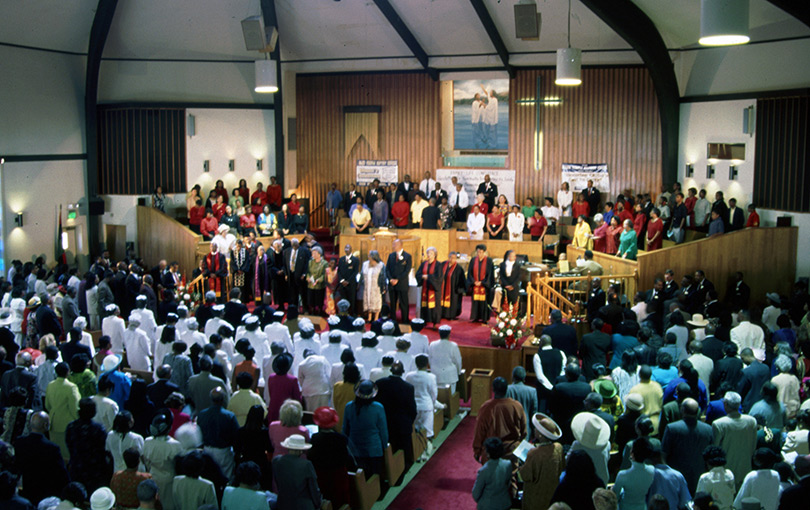 Black Panther Party’s First Office
DESCRIPTION: Although Huey Newton and Bobby Seale wrote the party’s founding principles on 15 October 1966 at 5500 Market Street, the first office of the Black Panther Party for Self-Defense was here. The founding principles called for adequate housing, jobs, education, and end to police brutality. It is fitting that the building is a source of jobs in its renovated role — Its All Good Bakery.
ADDRESS: 5624 Martin Luther King Way, Oakland, CA MAP
RAPID TRANSIT: None

First AME Church
DESCRIPTION: A congregation of more than 800 was founded in 1858. It established the first school for African Americans in the East Bay. Youth and job placement programs are popular. FAME moved to this distinguished building in 1954.
SUNDAY WORSHIP: 8a & 11a
ADDRESS: 530 37th Street, Oakland, CA MAP
RAPID TRANSIT: MacArthur BART Station
PHONE: 510-655-1527
WEBSITE: http://www.fameoakland.org

McClymonds High School
DESCRIPTION: It was “the school” when African-Americans were restricted from attending other high schools in the East Bay. The long list of famous alumni include Bill Russell and the Pointer Sisters. The structure is still maintained and in use as a high school.
ADDRESS: 26th Street at Myrtle Street, Oakland, CA MAP

DeFremery Park
DESCRIPTION: A historic, well maintained park and community center. The venue for many Black Panther Party of Self Defense community outreach programs, rallies for jobs and against police brutality. It includes tennis and basketball courts and a playground.
ADDRESS: 18th Street at Adeline Street, Oakland, CA MAP

Glad Tidings Church of God in Christ
DESCRIPTION: An anointed church doing great things with and for its growing congregation that enjoys a North and South Campus within walking distance of each other.
SUNDAY WORSHIP: 8a, 11:30a & 6p
ADDRESS: 27689 Tyrrell Avenue, Hayward, CA MAP
RAPID TRANSIT: South Hayward BART Station
PHONE: 510-783-9377
WEBSITE: http://www.gladtidingscogic.org