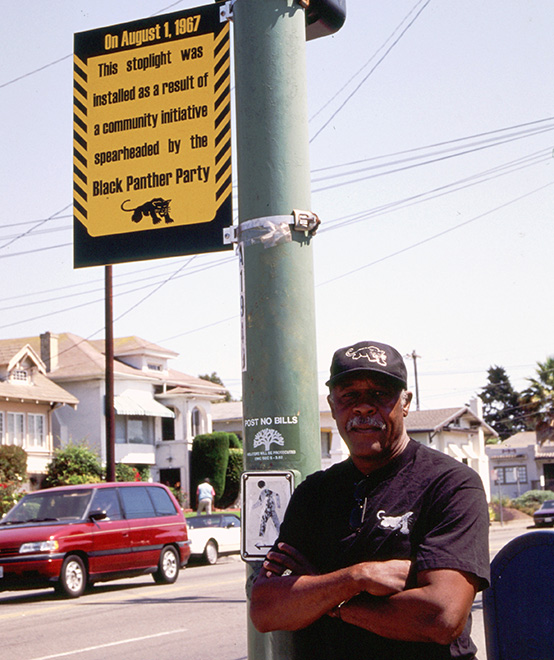 In 1966, Huey Newton and Bobby Seale formed the Black Panther Party of Self-Defense against police brutality and for community service. They were joined by Eldridge Cleaver, David Hilliard and others. This group of young, well-intentioned “radicals” set up programs to feed hungry kids, care for children and to reduce crime in West Oakland. Beginning in August 1967 at the corner of 55th and Market Streets, they got stoplights placed at key intersections to prevent accidents.

Though the icon of the party is of black-garbed men, the role of women can’t be understated. Sisters did most of the organizing, while men had the high profile positions. Specifically, the voter drive which helped elect Oakland’s first black mayor, Lionel Wilson and the East Bay’s first US Congressman, Ron Dellums, in the 1970s would not have succeeded without female Black Panthers going door to door. Thus, key leaders in the party to remember must include Huey’s wife, Fredrika Newton, Kathleen Cleaver and Elaine Brown.

The party planned, organized efficiently and met objectives. They read law books pertinent to their activities. They were persuasive and respected regionally, nationally and internationally. They were feared by powers in Washington.

Feared by politicians, police, and most importantly, J. Edgar Hoover’s FBI. If you’ve read any truthful American history, you know trouble was headed their way. There are conspiracy theories about the Party’s destruction involving the FBI — many have been proven valid. COINTELPRO papers released under the Freedom of Information Act prove that Black Panther Party members were hunted, physically abused, extorted, framed and killed without just cause by legal authorities. By the end of the 1970s the party was in shambles.

Though police and FBI pressure delivered a heavy toll, there were other reasons for the party’s demise as well. Like most American cities, drug abuse is an insidious cancer that destroys many good things in Black communities. Drug abuse by some, not all, members of the Black Panther Party proved that they were not immune from its deadly appeal. And throughout history, power abhors a vacuum. So the Black Panther Party’s drug victims and power struggles are understandable from a macro perspective.

But the most pertinent reason for the Party’s demise is African American progress. Having helped elect a mayor and Congressman, they could no longer easily pin political blame on “The Man.” The Fair Housing Act removed barriers to the city’s Black middle class, enabling them to move to North Oakland, Oakland Hills and the suburbs. The pattern repeated throughout the nation. With Affirmative Action opening more jobs for the qualified, the next battlefield required college degrees, suits and briefcases, not berets, leather jackets and guns.

Changing gears with the times, remaining party leadership scattered. For example, the party’s iconic leader, Huey Newton, picked up a doctorate degree and hit the lecture circuit. For a variety of reasons best explained by elder Black Panthers and some historians, Huey’s life took a turn for the worse. By the early 1980s he succumbed to drug abuse and was killed in a drug deal gone bad. Most tragically it occurred in West Oakland, the community he dedicated his life to defend and serve.