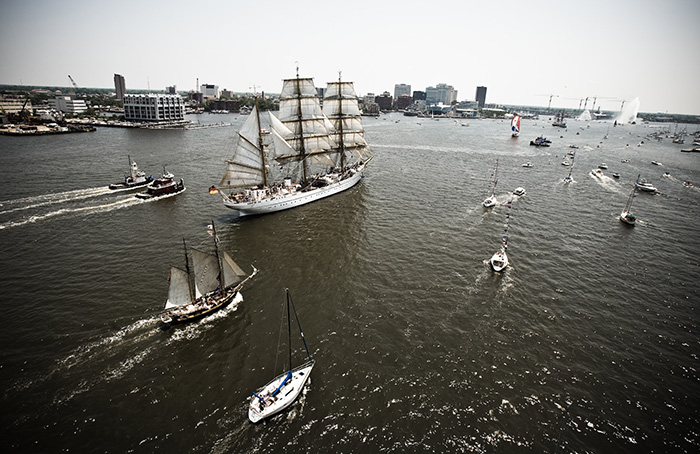 OpSail 2012 Norfolk illuminated the region with spectacle and festivity that the world noticed. The humble beginnings of this event started with President John F. Kennedy, since 1964, when New York City hosted the first OpSail. This first event, held in conjunction with the World’s Fair, brought together ships from around the world to celebrate global goodwill and maritime culture. Since then, OpSail events have been held in 1976 (U.S. Bicentennial), 1986 (Restoration of the Statue of Liberty), 1992 (400th Anniversary of Columbus’ landing), 2000 (millennium celebration), and 2007 (Jamestown Settlement). Each event has been larger and more exciting than the last.

This year, America celebrates Bicentennial of The War of 1812, which played an important part in our nation’s development and is often referred to as a second war for independence from Great Britain. The Bicentennial of the War of 1812 celebrated with tall ships in OpSail 2012, makes Norfolk a great place to visit from June 1-12, 2012. The Port of Virginia will once again host an impressive fleet of tall ships, navy and military war ships representing the world.

Tall ships and Navy Ships have always plied the waters of Virginia bringing everything from treasured cargo and slaves to the latest maritime weaponry and battleships. Virginia’s long experience of hosting tall ships and being home to the world’s largest naval base, have earned us the distinct honor of being one of the five historic ports selected for OpSail 2012 and this Bicentennial Commemoration.

The arrival of the ships consummated weeks of unique historical, cultural and educational events touching each and every corner of our community. Endorsed by the Virginia Commission on the Bicentennial of the War of 1812, this event provided a platform for Virginia communities to develop their own unique events and programs on an annual basis.

Events range from Parades of Sail, ship tours, spectacular fireworks, concerts and festivals, educational events and programs, Adopt a Ship opportunities, crew sporting events. Each ship brings its own distinct crew of worldwide cultures to share with all. International vessels manned by hundreds of military officers, cadets and crew. And though the sailors hail from all parts of the globe, each is bound together with camaraderie established when man sets his sail on the oceans of the world, committed to the defense of their country, to work in tandem with the awesome power and majesty that our great waterways supply. About 2 million people visited OpSail.