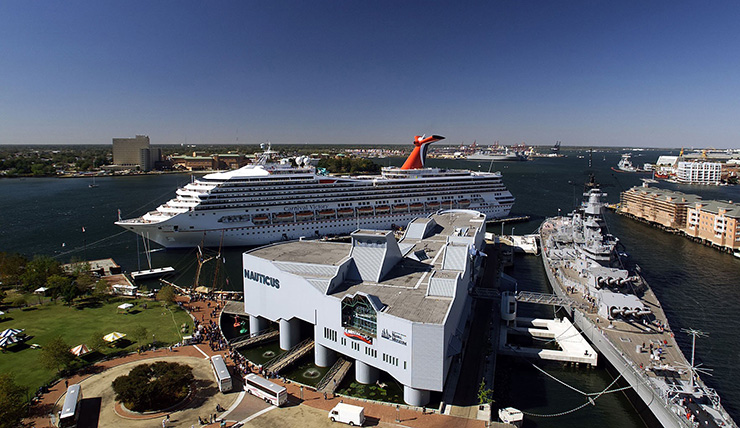 Train service recently began to Amtrak Norfolk Station at 280 Park Ave next to Harbor Park baseball stadium. The Norfolk station is within walking distance of the Light Rail station. Both stations host 3 daily Amtrak trains on Monday-Friday, with once daily service on weekends. As years go by, Amtrak planners anticipate more direct trains into Norfolk:

As you notice from the map, the Tide stops short of Virginia Beach. Recently, that city agreed to fund Tide Light Rail extension to the Virginia Beachfront, with opening planned by late 2019.

If you easily get motion sickness, buy dramamine 30-60 minutes before a cruise. On a cruise, sit in the rear of the lower deck where motion sensation is reduced.

Half Moone Cruise & Celebration Center
DESCRIPTION: named for a fort built ion the same site n 1673, is a state-of-the-art facility that boasts one of the nation’s largest privately-owned ocean liner collections as well as 400-year-old artifacts from historic Jamestown. It also also adjacent to Nauticus Naval Museum and USS Wisconsin Battleship. Since opening in 2007, this passenger-friendly cruise facility has become an award-winning port of call for several cruise lines traveling to Bermuda, the Caribbean and the Bahamas:
– Carnival
– Radisson Seven Seas
– Oceania Cruises
– Residen Sea
– Phoenix Reisen
WEBSITE: http://www.cruisenorfolk.org

Paddlewheel Ferry
DESCRIPTION: For fast, economical and panoramic harbor views catch a 150-seat paddle-wheel ferry boat. The system consists of 3 gas-powered ferries that travel between North Landing and High Street in Portsmouth and Downtown Norfolk at The Waterside. The ferry operates every 30 minutes, with 15-minute service at peak times weekends and is wheelchair- and bicycle-accessible.
ADDRESS: Waterside marina, downtown Norfolk
PHONE: 757-222-6100
WEBSITE: http://www.hrtransit.org

Portsmouth Harbor Tour
DESCRIPTION: Explore the world’s largest natural harbor, the nation’s first naval shipyard, and cruise the site of the battle between the Monitor and the Merrimac aboard a replica of a 19th-century Mississippi riverboat. A light fare menu is served on board for cruises during.
DATES & TIMES: April-October; 90-minute daytime cruises at 12:10p and at 2:10p. Sunset cruises June 1 through Labor Day at 6p
ADDRESS: Portsmouth’s North Landing on 6 Crawford Parkway
PHONE: 757-393-4735

Chesapeake Bay Cruise
Explore the Chesapeake Bay on a scenic four-hour cruise between Portsmouth, Crisfield, Maryland and Tangier Island cruises on the luxurious ship. The package from Crisfield to Portsmouth is offered two days a week. Both trips return the following day and include: round-trip cruise, lunch on vessel both days, overnight accommodations, breakfast buffet and a tour of the Naval Base from the vessel as it is on its way to Portsmouth. The vessel also makes a reverse trip from Portsmouth to Tangier Island, then on to Crisfield for an overnight stay
DATES & TIMES: June-October
PHONE: 410-968-2338 or 800-863-2338

Norfolk & Virginia Beach Freeways are well maintained, but signage is lacking in some areas. The ride across US Route 13 Chesapeake Bay Bridge & Tunnel is a thrill for most people because you can see the water around you as you submerge from the middle of the bay into two tunnels. When there’s an accident however, it can feel a bit claustrophobic crossing the Chesapeake Bay Tunnel. I-64 Freeway is often crowded with traffic coming from all points on the East Coast to Virginia Beach during warm weather. So allow extra time traversing this freeway.