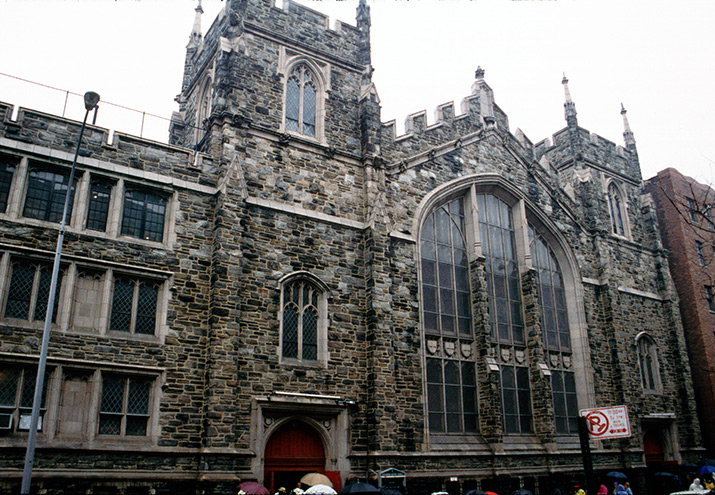 Mother AME Zion Church
DESCRIPTION: Similar to the AME congregation, in 1796, James Varick and 30 other members splintered from the Methodist Episcopal Church due to racism. They chose not to join the AME Church headquartered in Philadelphia, due to procedural differences; members built their own edifice in 1801 under the name John Street Methodist Church now affectionately called “Mother Zion” for short. The church continued to be led by a white minister until 1820. Mother Zion served as an Underground Railroad station and counted Harriet Tubman, Sojourner Truth, and Frederick Douglass as members. The current edifice designed by George W. Foster, Jr.
SUNDAY WORSHIP: 11a
ADDRESS: 140 West 137th Street, New York, NY MAP
RAPID TRANSIT: 2, 3 lines
PHONE: 212-234-1545
WEBSITE: http://www.motherafricanmethodistezchurch.com

Salem United Methodist Episcopal Church
DESCRIPTION: Began as a mission under St. Marks Methodist Episcopal Church in 1881. Salem was split from the church in 1902 when it moved to a 232 West 124th Street, but a fire soon destroyed it. Growth of church congregation forced them to move in 1908 to 102-104 West 133rd Street. Continuing its growth pattern, in 1924 the church had to move to a its current edifice. The church features four spectacular choirs.
SUNDAY WORSHIP: 11a
ADDRESS: 2190 Adam Clayton Powell Blvd, New York, NY MAP
RAPID TRANSIT: 2, 3 lines
PHONE: 212-678-2700
WEBSITE: none

ATLAH World Missionary Church
DESCRIPTION: organized in 1957 by the late Reverend Millard Alexander Stanley, this church has a large following and one of the most remarkable sanctuaries in Harlem. ATLAH means, the land where the people shall walk barefoot, because the land is holy ground.
SATURDAY WORSHIP: 11a
ADDRESS: 36 West 123rd Street, New York, NY MAP
RAPID TRANSIT: 2, 3 lines
PHONE: 212-427-2839
WEBSITE: http://atlah.org

United House of Prayer For All People
DESCRIPTION: Charismatic congregation that is an NYC off-shoot of the main one founded by Bishop Daddy Grace in 1919.
SUNDAY WORSHIP: 11a
ADDRESS: 2320 Frederick Douglass Blvd, New York, NY MAP
RAPID TRANSIT: A, B, C, D lines
PHONE: 212-531-4418
WEBSITE: http://www.tuhopfap.org/index2.html

Riverside Church
DESCRIPTION: Dr. Martin Luther King delivered his “Beyond Vietnam” protest speech on 4 April 1967 at this huge church on the outskirts of Harlem. The speech elevated his status in the anti-war movement and caused many African Americans to re-think their position on the war. Unfortunately, the speech also moved him up on the disgraceful J. Edgar Hoover’s Cointelpro list of undesirable black leaders.
SUNDAY WORSHIP: 10:45a
ADDRESS: 490 Riverside Drive, New York, NY MAP
RAPID TRANSIT: 1 line
PHONE: 212-870-6700
WEBSITE: http://www.theriversidechurchny.org