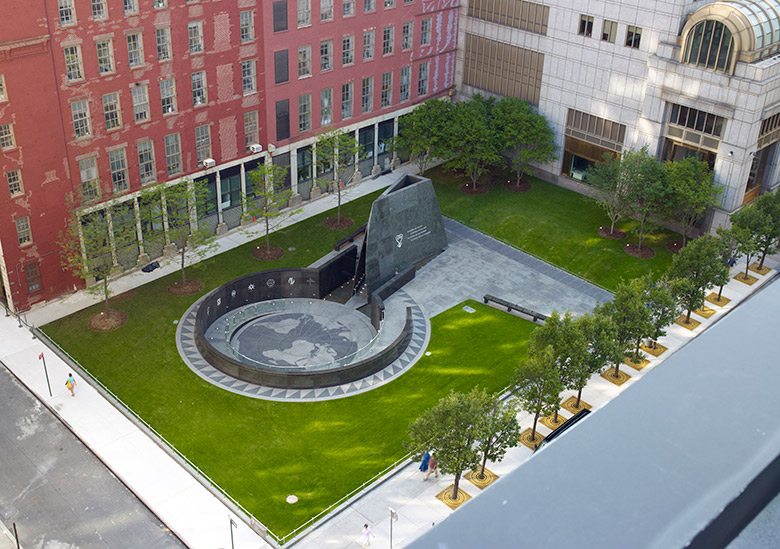 African Burying Grounds
DESCRIPTION: Only preserved African burial site in an urban area from the 17th and 18th centuries. This National Historic Landmark was used as a cemetery for nearly 100 years. The original site encompassed most of the park space in front of City Hall. The remains of more than 400 people were recovered during 1991 Federal Building construction near Broadway and Reade Street. Architect Rodney Leon designed the landmark memorial.
ADDRESS: 97 Orchard Street, New York, NY MAP
PHONE: 212-431-0233

Fraunces Tavern
DESCRIPTION: This Georgian brick structure was reportedly built in 1719 and purchased by Samuel Fraunces in 1762. Fraunces was of West Indian and French descent; previously a steward for General George Washington, he wisely leveraged his friendship with the general and other American Revolutionaries to build one of the finest and best patronized dining establishments of the time. One suspects that Washington liked the food and service because Fraunces sold his establishment after the Revolutionary War and went to work for President Washington. The building was refurbished in 1927 and today serves as a restaurant and period museum.
DAYS & HOURS: Mon-Fri 10a-4:30p; Sat-Sun Noon-4p
ADDRESS: 54 Pearl Street, New York, NY MAP
PHONE: 212-425-1778

Historic Five Points
DESCRIPTION: A district named in the 1830s as the convergence of five streets: Mulberry, Anthony (now Worth Street), Cross (now Park), Orange (now Baxter), and Little Water Street (no longer exists). This multiracial Black and Irish neighborhood is adjacent to the north of City Hall and Courthouse, between Broadway and the Bowery. This district is famous for protecting the lives of its Black residents during the infamous 1863 New York Draft Riot and for inventing Tap dancing.
ADDRESS: Worth Street at Columbus Park, New York, NY MAP
WEBSITE: http://urbanography.com/5_points

National Urban League
DESCRIPTION: Founded in 1910, the National Urban League has 115 affiliates in 34 states and DC. Its mission is to assist African Americans in the achievement of social and economic equality. Under the leadership of Hugh B Price, it emphasizes greater reliance on the unique resources of the African-American community to solve its own problems.
ADDRESS: 120 Wall Street, New York, NY MAP
PHONE: 212-558-5300
WEBSITE: http://www.nul.org

Minton’s Playhouse
DESCRIPTION: Allegedly, Bebop music was born here when Thelonious Monk, Fats Waller, Charlie Parker, Dizzy Gillespie, Kenny Clarke and others were allowed improvise by the club owner. Sessions were often after other gigs in the late hours, so they rapidly become a favorite of top jazz musicians; legend has it that Fats Waller coined the musical term “Bop” when describing improvisational rifts by the younger musicians. The playhouse now includes a housing unit for the elderly.
ADDRESS: 210 West 118th Street, New York, NY MAP
PHONE: 212-864-5281

Hotel Theresa
DESCRIPTION: This beautiful brick building was “The Hotel” for blacks during the Jim Crow segregation period. So many have laid their head on its pillows and enjoyed the respect and comfort of its service, including Lena Horne, Billie Holiday, Joe Louis, Cab Calloway, Dizzy Gillespie, Lester Young, Duke Ellington. The late Secretary of Commerce Ron Brown lived upstairs during a good portion his adolescence. After Malcolm X split from the Nation of Islam, he held several of the Organization of African American Unity meetings here. Its now an office building without scheduled tours.
ADDRESS: 2090 Adam Clayton Powell Blvd, New York, NY MAP

Connie’s Inn
DESCRIPTION: Another famous basement club that opened during Prohibition Era of the 1920s, primarily for the benefit of European Americans coming to Harlem for entertainment. It was a frequent hangout for gangsters. It did however, further the careers of Billie Holiday, Fletcher Henderson, Fats Waller and Louis Armstrong. Today, its a retail store.
ADDRESS: 2221 Adam Clayton Powell Blvd, New York, NY MAP

Lafayette Theater
DESCRIPTION: A major competitor to the Lincoln Theater since the silent film era. It hosted some of the earliest Off-Broadway revues with African American producers, writers, and performers. Noble Sissle and Eubie Blake introduced Shuffle Along here in 1913, which was the first African American revue to make Broadway. Duke Ellington and many early 20th century composers can rightfully claim that they first ‘hit the big time’ here; since 1950 it has been converted to Williams CME Church.
ADDRESS: 2227 Adam Clayton Powell Blvd, New York, NY MAP

James Weldon Johnson Residence
DESCRIPTION: Late officer of the NAACP, published poet, songwriter and ambassador to Haiti. Johnson lived here from 1925 to 1938 and is credited with writing the lyrics to the unofficial black national anthem, Lift Every Voice and Sing. Its not open to public.
ADDRESS: 187 West 135th Street, New York, NY MAP

Tree of Hope Monument
DESCRIPTION: The famous good luck tree lived on a boulevard median opposite the Lafayette Theater until it was destroyed in 1934. A small monument for the tree remains at the site. The stump was placed in the Apollo Theater were it is rubbed for good luck before each performance.
ADDRESS: Adam Clayton Powell Blvd at 132nd Street, New York, NY MAP

Audubon Ballroom
DESCRIPTION: Opened in 1912, this 2,400-seat theater was one of the first Fox theaters for vaudeville acts and movies. Though the venue was also popular for many speeches and rallies, it became an infamous historic site of the assassination site of Malcolm X on 21 February 1965. Saved from a controversial demolition, a 12 by 63-foot mural painted by Daniel Galves, debuted to the public in 1997 to honor the achievements of Malcolm X and there is a life-sized statue of Malcolm X in the lobby.
ADDRESS: 3940 Broadway, New York, NY MAP
WEBSITE: http://www.themalcolmxmuseum.org

Smalls’ Paradise
DESCRIPTION: Opened in 1925 this basement club could hold nearly 1500; a speakeasy during prohibition, it was famous for waiters who did the Charleston dance while balancing trays; unlike many other famous clubs in Harlem, it admitted African Americans — with a lot of cash. NBA basketball player Wilt Chamberlain was owner for a brief time before it closed in 1986.
ADDRESS: 2294 1/2 Adam Clayton Powell Blvd, New York, NY MAP

Harlem YMCA
DESCRIPTION: A cultural and spiritual home to Harlem notables and regulars since 1919. African American leaders, such as James Weldon Johnson, supported separate Y’s during the Segregation Era (1877-1965) under the premise that if there were no separate Y’s for Black patrons, there might not be rooms for Black guests at all. The Harlem Y offered recreational facilities as well as vocational and literacy classes, lectures, theatrical and musical performances, community meetings, and became a center of political activity; among residents who called the Y home were famed Renaissance poets, novelists, and journalists Claude McKay and Langston Hughes, writer Ralph Ellison, inventor George Washington Carver, and rights activists Paul Robeson and Malcolm X. The theater stage at this site is where Eartha Kitt, Sidney Poitier, Ossie Davis, Ruby Dee, James Earl Jones, Cicely Tyson and Danny Glover launched careers that led to Hollywood.
ADDRESS: 180 West 135th Street, New York, NY MAP
PHONE: 212-281-4100
WEBSITE: http://www.ymcanyc.org/harlem

369th Regiment Armory
DESCRIPTION: Historic home of the brave Harlem Hellfighters of WWI and WWII. Historians note that when the valor of infantry like the 369th paved the way for our desegregation of the U.S. armed services.
ADDRESS: Fifth Ave between 142nd and 143rd Streets, New York, NY MAP
PHONE: 212-926-6401