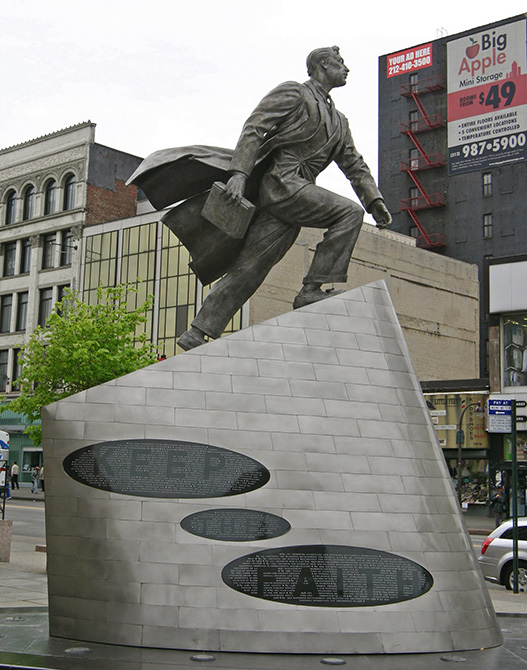 A hotbed of activism throughout the 20th century, New York City has been the speaker’s podium to frame understanding of the Civil Rights Movement in America. It was the home of W.E.B. Du Bois (1868-1963) and The Crisis magazine, which he edited for the NAACP. In The Crisis, Du Bois proclaimed his “Talented Tenth” doctrine of identifying our most talented leaders and grooming them to lead African Americans to the higher echelons of society.

The National Urban League, now headquartered Downtown, started in Harlem. Theresa Hotel in Harlem, was the most common meeting place of Civil Rights leaders. Arguably, Harlem did best shaped the language of the Civil Rights Movement.

Marcus Garvey founded the United Negro Improvement Association in Harlem, which was the first large scale movement for Black Self-Determination in America. New York City was home to Adam Clayton Powell, Jr. and Malcolm X, who each contributed critical elements to the Civil Rights Movement and internationally, the Human Rights Movement. Dr. Martin Luther King Jr. gave one his three greatest speeches at Riverside Church on the edge of Harlem.

Though he could easily claim residence on a plane or train, since he spent most of his adult life abroad, Paul Robeson (1898-1976) presented some of his most compelling human rights speeches in New York City and lived here from time to time. Many of Langston Hughes (1902-1967) most powerful poems and the Lift Every Voice anthem were composed in Harlem.

Asa Phillip Randolph (1889-1979), leader of the Pullman Porters and co-organizer of the 1963 March on Washington, attended Community College of New York and called New York City home. We can measure this underrated leader’s achievement by stronger worker unions. At one time Black laborers had half of or no health care benefits compared to white blue collar workers. We can thank Randolph for ensuring that the AFL-CIO treated Black worker rights the same as white worker rights.

As the Civil Rights Movement morphed into a movement to eliminate racial profiling, police brutality and murders by police, Al Sharpton seized the mantle of leadership in New York City and took it to a national platform. A former Presidential candidate, his record for public service is solid, but slowly giving way to the younger Black Lives Matter movement.