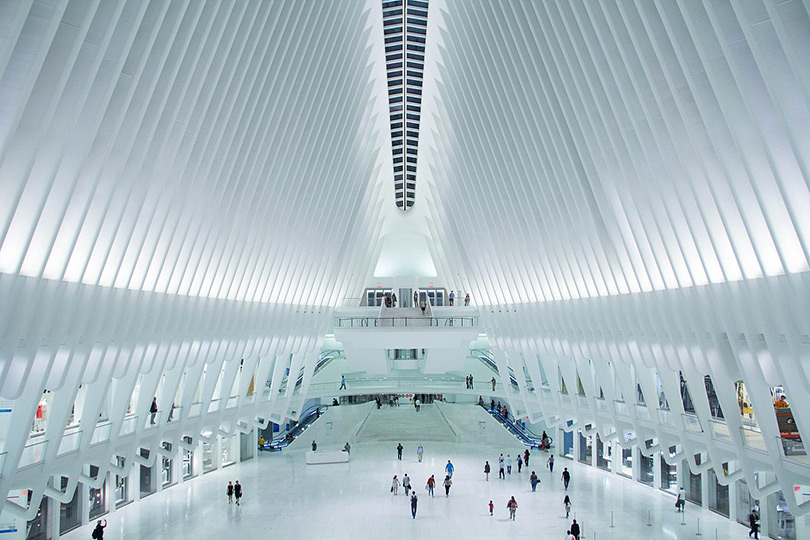 John F. Kennedy International Airport (JFK) is America’s 6th busiest airport. By far, JFK handles the most international flights in America. Despite numbering terminals 1-8, there is no terminal 6, This huge airport is located on the southern coast of Queens, New York so driving and transit options both can take over an hour reaching Manhattan. JFK Airport Terminal Map

JFK-Brooklyn-Manhattan Rail Connections:take AirTrain JFK light rail to the Howard Beach Station and transfer to the A subway train. It costs under $10 (AirTrain + MTA subway) and rides last 50-70 minutes to various lower Manhattan stations. You can also catch an AirTrain to Howard Beach Station to catch the Metro A train to Brooklyn and Manhattan.

EWR-Newark-Manhattan Rail Connections: AirTrain Newark automated people mover whisks you between terminals and connects to NJ Transit trains that commute to downtown Newark and NYC Penn Station. The cost is around $15 and the commute is 25 minutes or less. On your return, purchase tickets from the Penn Station vending machine and catch the EWR NJ Transit train.

Shuttles and Limos: Super Saver Shuttle (800-924-9954), Westchester Express (800-910-5466), and Classic Limousine (800-666-4949) are available from JFK and LGA from 7am to Midnight. Go to the ground transportation desk at each airport to catch a relatively inexpensive Gray Line Express bus to Grand Central Terminal.

Limousine rates vary greatly, depending on number of passengers from each airport, major events nearby and hour of commute.

Amtrak routes served from this station:

Though delayed by the pandemic, nextgen Acela trains featuring speeds up to 160 mph begin service in fall 2023. They will run more frequently, produce shorter trip times, and include more amenities for an exceptional passenger experience. See Amtrak Acela journey towards world-class service.

Metropolitan Transportation Authority (MTA) manages a vast network of subway trains, commuter trains and buses linking the entire region at a single low cost. MTA Subway lines travel to 471 stations over 660 miles. More than 4,000 buses travel on 207 local and 36 express routes citywide. An MTA subway or bus ride costs $2, regardless of trip length and all fares are paid via a MetroCard at the pay fare machine or downloadable mobile app. Visit MetroCard Promotions to access money-saving deals for reduced admission to museums and attractions or discounts at many stores and restaurants. Do not confuse MTA subway or MTA commuter trains with New Jersey Transit or PATH trains, since they have separate ticketing, schedules, and station boarding areas.

The Arts for Transit initiative is designed to enhance the travel experience of subway riders by adding the beauty of art and culture to their trips. The initiative’s Music Under New York (MUNY) program provides riders with a variety of musical performances at select subway stations.

MTA Subways, though slightly noisy and hard-seated, are an efficient transportation marvel that run 24/7. Many subway stations have been refurbished. Newer trains replace older trains each year. Several north-south subway lines through Manhattan have express and local trains on separate tracks, speeding commuters from Downtown to Midtown to Uptown in minutes. Express trains skip 3-4 stations (20-30 blocks) between each stop making it the best way to go north-south during commute hours. Ask a MTA station agent for a free subway map and information about express trains before boarding. MetroCard vending machines accept cash, debit cards and credit cards. The MTA Q line recently extended north from Lexington Ave/63rd St Station under Second Avenue to 96th St Station, thereby reducing congestion on MTA 4, 5, and 6 lines through the Upper East Side. Q Line Phase 2 extension to 125th Street in East Harlem is funded and planned for completion in 2027. There are currently 26 MTA subway lines: MTA SUBWAY SYSTEM MAP

Grand Central Terminal serves over 500,000 daily transit commuters and out-of-town visitors. Civil engineers marvel at the multi-layered network of 44 platforms and 67 tracks under this transportation temple first opened in 1871. It remains one of the busiest train stations in the world. Enter from Lexington Avenue to get a jaw-dropping view of the GCT Main Concourse. Its vaulted ceiling has an astronomically inaccurate design that nonetheless makes it a joy to crane your neck looking at. Dotted with monuments and marble steps, Grand Central Terminal reminds us of what America lost when it destroyed many of our great train stations. Twice upgraded, GCT has nearly 30 upscale boutiques, restaurants, and cafes. Visitors may contact the Municipal Art Society at (212-935-3960) for a Wednesday tour. While there, check out the free New York City Transit Museum and store.

Before boarding, it is essential to review Metro-North Map, confirm your station destination, and confirm your train’s precise name, since boarding the wrong train can cause a very bad commute. MTA METRO-NORTH RAILROAD MAP

Harlem Heritage Tours
Celebrate Harlem’s past and participate in the cultural and economic renaissance taking hold in the community. All tours are conducted by those who live in the community; they offer an assortment of cultural walking, bus, jazz, gospel, and day trip experiences with experiences tailored for: Religious Groups, Family Reunions, Individuals, Senior Groups, School Groups, Fraternities & Sororities
WEBSITE: http://www.HarlemHeritage.com

Braggin’ About Brooklyn
Excellent historical and cultural tours to make you aware of the contributions of African Americans art and science in Brooklyn and Manhattan
ADDRESS: 685 Gates Avenue
PHONE: 718-297-5107

The Brownstoners of Bedford-Stuyvesant
House tours featuring the architectural and cultural heritage of Brownstone houses in the Bed-Stuy community of Brooklyn; contact Akwaaba Inn Brooklyn for more info
PHONE: 718-455-5958

Queens Jazz Trail
The Flushing Council on Culture and the Arts host a Jazz trail that includes tours past the former homes of the Jazz giants and visits to the town hall Jazz exhibition; 137-35 Northern Blvd, Flushing
PHONE: 718-463-7700

New York and New Jersey Spirit Cruises
Bateaux New York and Spirit of New York day and dinner cruises traverse both sides of the Hudson River. On the NYC side, they depart from Chelsea Pier; on the New Jersey side they depart from Lincoln Harbor
PRICES: vary depending on the type of cruise
ADDRESS: Pier 62 at West 23rd Street, Suite 200, New York, NY
PHONE: 212-727-7735

Statue of Liberty & Ellis Island Ferry
Breath-taking Inexpensive ride – plan on using a roll of film; departs every 30 minutes in warm months, every 45 minutes in colder months. With either island, stay for as long as you like, since there are many return ferries throughout the day. Depart NYC from Battery Park (on the southwestern tip of New York City). Ferries dock net to Castle Clinton.
PHONE: 212-269-5755
WEBSITE: http://www.ny.com/transportation/ellis.html

Circle Line Ferry
New York City is an island of breathtaking man-made structures and riverside parks. Both traits make it ideal for sightseeing by a circle-route ferry. Service departs from Battery Park in New York City and from Liberty State Park in Jersey City; purchase refreshments and souvenirs on board; check websites for schedule and prices
WEBSITE: http://www.circleline.com

New York Freeway and Tollway Network is extensive. Two highways worth driving are the magnificently designed Verrazano-Narrows Bridge between Brooklyn and Staten Island and the George Washington Bridge between Manhattan and New Jersey. The tollways, bridges and tunnels are expensive for short distances traveled. Keep at least $10 handy drive to/from Manhattan. The highways are crowded and in varying states of repair, so congestion can occur any hour before 10pm. Such congestion incentivizes urban dwellers to use the rapid transit system.