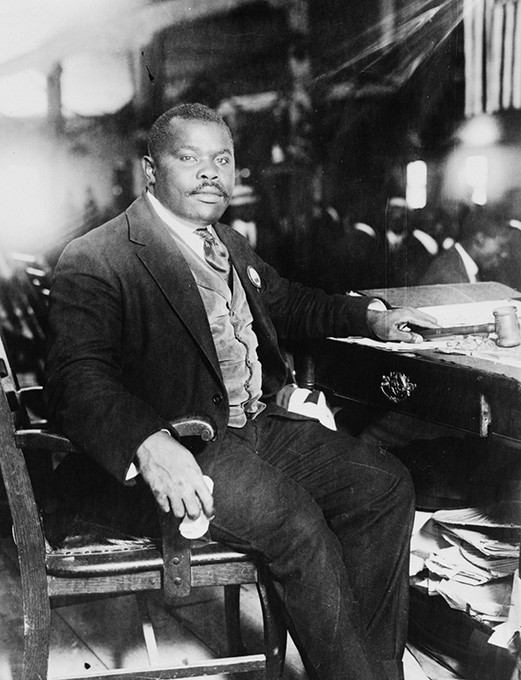 Marcus Garvey (1887-1940) began his political involvement at age 20 by leading a printer’s union strike even though he was a manager. In 1909, he formed the National Club whose focus was uplifting the Black race. Shortly after arriving in Harlem in 1916, Garvey founded the Universal Negro Improvement Association (UNIA) in Harlem.

At its zenith, UNIA had over 3 million members and 300 branches in the US. In 1920 he organized the first International Convention of the Negro Peoples of the World in Madison Square Garden At that convention, the colors Red, Black & Green were chosen as black neo-nationalist colors. Garvey and the UNIA established the Negro Factories Corporation, which was a collaborative of African American stores, restaurants, shops and publishing entities. He edited the Negro World newspaper and launched the Black Star Line ship for the “Back to Africa” movement. He was the most powerful Black speaker, motivator and leader of his era. He was also feared. Unfortunately, financial handling associated with the Black Star Line led to his undoing. The full backstory is still murky, but he was an easy target to convict of federal mail fraud.

Since he did not personally gain from the events, it would appear that Garvey was only guilty of financial mismanagement without criminal intent. That lesser charge would not suffice to powerful forces out to remove him from power. He was incarcerated in Atlanta in 1925 for federal mail fraud. Earl Little, Malcolm X’s father, wrote a letter to President Coolidge requesting clemency for Marcus Garvey. Released from prison in November 1927, Marcus was deported and vowed never to return to the USA. Though he attempted to reestablish the UNIA abroad, with his reputation in shambles, Garvey’s efforts never reached the same level. He died in London from a cerebral hemorrhage on 10 June 1940.

Garvey’s self-determination philosophy had profound impact on Civil Rights Movement and the Nation of Islam and various other oppressed people around the world. Today, Harlem honors Garvey with a sizable park well loved by all that it serves. For additional info visit: