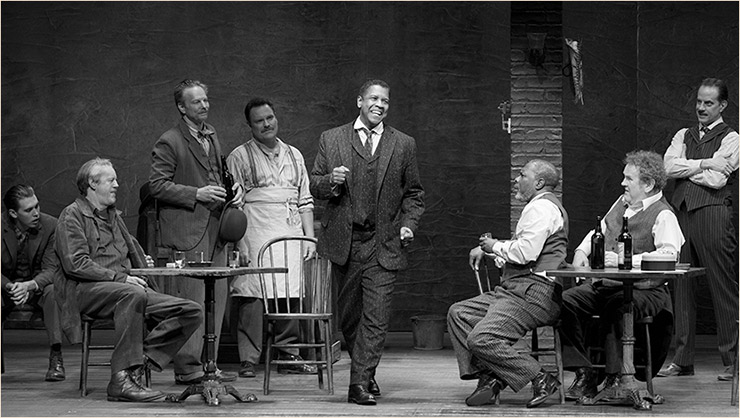 The world-renown theatre district we know as Broadway was first a thriving community of Africans Americans and immigrants in the 1800s. Then around 1850, theatres from downtown began the slow transitional move to midtown for lower real estate prices and enough land required to build new, larger theatres. Before 1895, all Negro characters in the Broadway theatres were portrayed by white characters in Blackface. And by 1900, Broadway centered around Longacre Square (now called Times Square) and fleshed out to about 40 theatres extending from 40th Street to 54th Street, and from west of Sixth Avenue to east of Eighth Avenue.

Broadway averages over $900 million in box office and 35 new plays per year. American icons, these cathedrals of evocative imagination are home to the most remarkable generations of showmen, playwrights, directors, actors, composers, musicians, set & costume designers and live theatre producers in the world. It is the place where many Hollywood stars began their careers and sometimes return to for the thrill of a live connection with audiences.

When did a significant African American presence begin in acting, singing, playwrighting, directing and producing on Broadway? The first two significant black productions were Bob Cole’s A Trip To Coontown and Will Marion Cook’s Clorindy: The Origin Of The Cakewalk in 1898 – both enjoyed modest success.

Arguably, the first major Black production occurred in 1903 at the New york Theatre in the Bowery District, In Dahomey. A full-length musical, it featured music by Will Marion Cook, lyrics by Paul Laurence Dunbar and was the first to star James Smith, George Sisay, and Bert Williams. In Dahomey was groundbreaking in the way it combined musical, comedy, opera and vaudeville genres, making its artistic influence broader than its box office receipts. It ran successfully for a couple months, before the entire production moved to London. It returned to New York City’s Grand Opera House in the Chelsea District in 1904.

After a lengthy drought for Blacks on Broadway, the musical Shuffle Along (1921) by Noble Sissle and Eubie Blake created quite a stir and reminded Broadway producers that a well-crafted Black musical could make money. Show Boat at the Ziegfield Theatre (1927-1929) hosted the largest African American cast to play before general audiences. That hugely successful production opened doors for many Black performers. Though in the midst of the Great Depression, Porgy and Bess (1935), and Swing it kept the hits coming. Then Cabin In the Sky (1940) Carmen Jones (1943) and St. Louis Woman (1946) and Beggar’s Holiday (1946) and The Barrier provided meaningful Broadway roles as an alternative to inconsequential or demeaning Hollywood roles.

Thus, Broadway was an artistic refuge for the likes of Paul Robeson in 1943, with his award-winning portrayal of Othello — to this day has been the longest running Shakespeare play on Broadway.

This is not to say that Broadway was perfect in its opportunities for people of color. Far from it. Perhaps a good generalization is that Broadway and Baseball led American society in proving that African Americans could have lead roles and themes in financially successful team productions. With that generalization in mind, actors such as Sidney Poitier, Harry Belafonte, Ruby Dee, Ossie Davis, Sammy Davis Jr., and Diana Sands, captured critical acclaim portraying a wider array of realistic Black-oriented themes like A Raisin In The Sun, Black Nativity, Purlie Victorious, Golden Boy, and Blues for Mister Charlie, as well as important roles in general plays. With the success to build on from the 1950s and 60s, Lonetta McKee, Cleavon Little, Melba Moore, James Earl Jones, Geoffrey Holder and others kicked the door open in the 1970s.

Since then, we’ve seen a wellspring of fine Black-oriented plays like The Wiz, Jelly’s Last Jam, Dreamgirls, Ain’t Misbehavin’, Bring In Da Noise, Bring In Da Funk, Ragtime, Black and Blue, Your Arms Too Short To Box With God, Sophisticated Ladies, Eubie, Topdog/Underdog, The Color Purple and Debbie Allen’s Cat On A Hot Tin Roof have graced Broadway stages. Lloyd Richards and George C. Wolfe cut their teeth as award-winning Broadway directors. Excluding Radio Golf and Jitney, Pulitzer Prize-winning playwright August Wilson saw all of his Pittsburgh plays covering each decade from 1910 through 2010 produced on Broadway. A recipient of the New York Drama Critics Award, had Lorraine Hansberry lived longer, we can only imagine the broader reach and impact of her life’s work.

Perhaps the best sign of progress is when Broadway renamed a prominent theatre to honor August Wilson only two weeks after his death in 2005. And in 2018, we had Denzel Washington making a celebrated return to Broadway in a revival of The Iceman Cometh at the Bernard Jacobs Theatre. John Legend starred in Jesus Christ Superstar in Broadway style show telecast live from Marcy Avenue Armory in Brooklyn. Legend won an Emmy award for the show and became one of the few people to win EGOT (Emmy, Grammy, Oscar, Tony) awards.