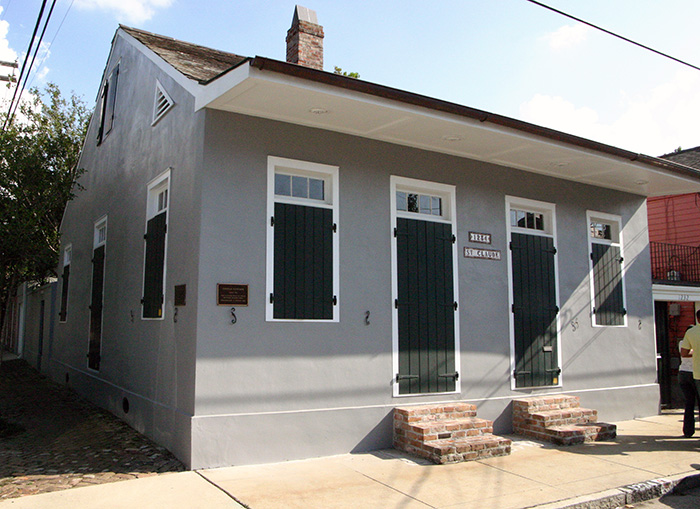 Made famous by a cable TV series, Faubourg Treme’ (pronounced “Fo-boorg Tre-may”) or just Treme is one of the oldest African-American districts in the country. Most tourists mistakenly think that Treme’ is bounded by I-10 Freeway instead of Broad Avenue. Its 19th Century pedestrian-friendly streets are bounded by Rampart Street, Canal Street, St. Bernard Street and Broad Avenue.

Land occupied by Faubourg Treme was once owned by Claude Treme’, a wealthy planter. A large chunk of his land was purchased by the city in 1809 and subdivided for housing. In those days it was considered a faubourg (“suburb”) of the city. Churches were the most dominant structures for 87 years, until changing the suburbs attracted more whites, leaving the door open for more African Americans.

As customary for the 1890s onwards, white male elites chose a vulnerable neighborhood within the politically weak black community to become a red-light district. The city had a no-holds barred purveyor of liquor and prostitution in the area. A subdivision of Treme closest to Canal Street became Storyville, the Birthplace of Jazz. Providing steady work and better social conditions for African-American musicians, Storyville was home to an monumental roster of Jazz musicians: Buddy Bolden, Sidney Bechet, Jelly Roll Morton, King Oliver and Louis Armstrong. When politics and local sentiment shifted in 1917, Storyville ended. It became known as Iberville and most buildings were replaced by the Iberville Housing Projects. Only St. Louis Cemetery #1 and #2 are unchanged.

In the 1950s and 1960s, Treme was designated by white elites as the path of least resistance for I-10 Freeway through New Orleans, absorbing the negative impacts of community separation, smog, increased lung disease and depressed home values.

An unfinished story, Armstrong Park has enjoyed a slightly better fate in Treme. The Municipal Auditorium, Theatre of Performing Arts and the Treme Community Center are welcome neighbors to Congo Square. But misguided planning and landscape design allowed this potentially great park to fester at the gate of opportunity. Who thought adding a system of canals with gondoliers and an expensive, garish entry arch was a good idea? For the same public expenditure, Armstrong Park could have supported a well-designed outdoor performance venue, a better landscape design, and a world-class Jazz Museum. Nearby private investment in cafes, shops, Jazz and Blues nightclubs on Rampart Street would have occurred much sooner.

Treme has a brighter future. The segment adjacent to the French Quarter is anchored by the African American Museum of Art, Culture and History and retains a Bohemian atmosphere with a few cafés, shops and nightclubs. Residential restoration is underway. In a few years when Desire Streetcar Line is reborn, North Rampart Street in Treme’ should become a robust tourist destination like Frenchmen Street in Faubourg Marigny.

The most exciting development in Treme is redevelopment of many authentic Creole homes. Andrew & Naydja Bynum redeveloped all the homes in the 1200 block of St. Claude Street down to finely detailed balustrades (columns), railings and curls are the stuff and backyard gardens. Each home is remarkable, romantically unique use of space. You just want to kick back with a glass of wine and chill.