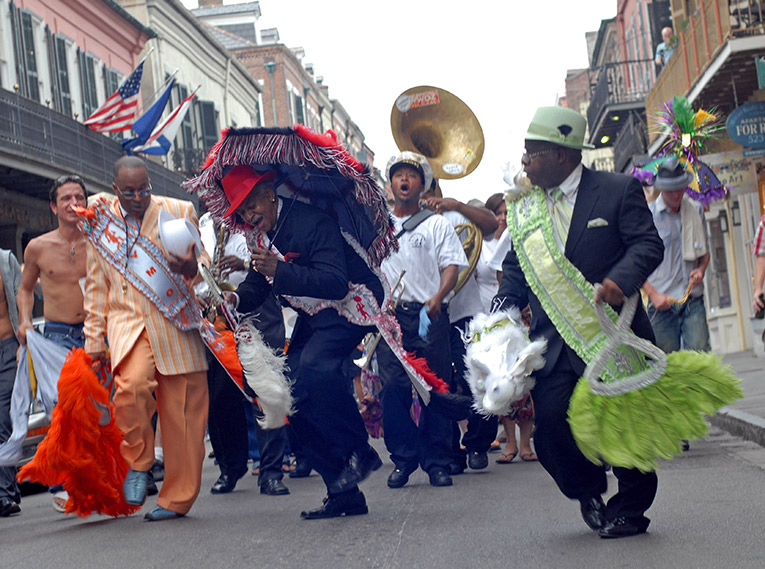 The Jazz Funeral emerged to give folks a proper send-off in New Orleans. On the way to the cemetery, slow mournful music is played. Upon leaving the cemetery, the mood does a 180 degree turn into a party called a Jazz Funeral. Where else would people write such loving and contemporary stories about the funeral of a guy known locally as, The Emperor of the Universe.

As you would expect, Cemetery #3 had the most colorful Jazz Funerals.

Another manifestation of that social fusion was black youngsters emulating the Grand Marshal and musicians of Anglo-American parade in the late 1800s. Grand Marshals were responsible for the “Main Line”, which is the main section for members of a Social & Pleasure Club that have a permit to parade. Ya’ know the brothers had to get funky with it.

Over time, these emotive displays during extravagant parades like Mardi Gras became the Second Line tradition, commonly called Second Linin’. It really took off with the introduction of brass jazz bands. Thus, Social Aide & Pleasure Club tradition is a mixture of Anglo-American, African-American and African traditions in New Orleans forming one of the most unique cultural celebrations in America.

The Original Illinois Club formed sometime in the 1800s. It is the oldest known African-American social organization and cherished for its popular Second Lines and Jazz Funerals around New Orleans.

Fans and admirers form the Second Line of the planned street parade. By state law, city ordinances and for traffic reasons, such parades seldom run on main boulevards in the city. Consequently, Main Lines and Second Lines are typically held in neighborhoods where the traditions continue to flourish. Occasionally you see them in the French Quarter, like Royal Street pictured above.

When someone grabs you for Second Linin’, just go with the flow!