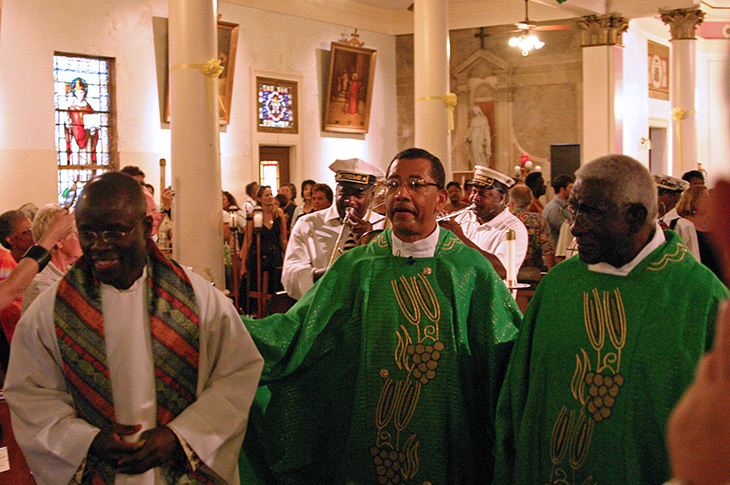 Congo Square
DESCRIPTION: Beginning in the 1700s, enslaved people met there on Sundays to participate in traditional African music, songs and dance; as many 600 people at a time would join in for a soulful Gospel and Blues outpouring. Many believe that Jazz was formed here when classical music trained Creoles met with freed slaves who sang the Blues, sparking a new improvisational genre of music. The square is located in Armstrong Park.
ADDRESS: North Rampart and St Ann Streets, New Orleans, LA MAP
PARKING: on street

French Market
DESCRIPTION: This landmark tourist attraction is a shoppers favorite today, it was designed by a free man of color, Joseph Abeilard. In the 1700s free persons of color, enslaved people, whites and American Indians all traded good goods here. In a multi-million dollar renovation in the 1970s restored the vibrancy to this marketplace. There’s still a farmers market among the gift shops and cafes.
ADDRESS: French Market Place at Ursulines, New Orleans, LA MAP
PARKING: on street

Flint-Goodridge Hospital
DESCRIPTION: Founded in 1911 and managed by Dillard University. This 88-bed institution was one of only two medical facilities that cared for Black patients in New Orleans. In the 1930s, it was the only medical school for African Americans in Louisiana. At one time, it had 29 African American doctors on staff.
ADDRESS: Louisiana at LaSalle Street, New Orleans, LA MAP
PARKING: on street

Knights of Peter Claver National Headquarters
DESCRIPTION: Founded in 1909 a as predominantly Creole Catholic fraternal organization. The original building at this site served as the local headquarters for the Urban League, NAACP and other civil rights organizations before being replaced by this modern structure.
ADDRESS: 1825 Orleans Avenue, New Orleans, LA MAP
PARKING: on street
PHONE: 504-821-4225

St. Louis Cemetery #3
DESCRIPTION: This cemetery was set aside for African American Catholics. Marie Laveau, Oscar J. Dunn, members of the Sisters of the Holy Family, Arthur Esteves, Mayor Ernest “Dutch” Morial are buried here. Most iron ornaments and tomb gates were fashioned by African-American artisans, many of whom are also buried in the cemetery. Visits are conducted by the National Park Service daily, not nightly. When you call, ask when a funeral procession is scheduled, it may turn into a Jazz Funeral.
ADDRESS: 3421 Esplanade Avenue, New Orleans, LA MAP
PARKING: on streets nearby
PHONE: 504-589-2636

St. James AME Church
DESCRIPTION: This Victorian Gothic church traces its founding back to 1844 by a group of free persons of color. The church was founded when several members were mistreated at multi-racial congregation Wesley Chapel Church. Thomas Doughty was the first pastor. The present church was built in 1851 and remodeled in 1903.
SUNDAY WORSHIP: 10a
ADDRESS: 222 North Roman Street, New Orleans, LA MAP
PHONE: 504-586-8381
WEBSITE: none

First African Baptist Church
DESCRIPTION: Founded in the 1830s, it is among the oldest continuous African American church congregations in Louisiana. The current edifice was built in the early 1900s.
SUNDAY WORSHIP: 11a
ADDRESS: 2216 3rd Street, New Orleans, LA MAP
PHONE: 504-895-1229
WEBSITE: none

St. Peter AME Church
DESCRIPTION: The oldest black congregation in New Orleans, its edifice was constructed in 1858 as the Jefferson City Methodist Episcopal Church, African-Americans were permitted to worship in Jefferson City Methodist Episcopal until after the Civil War. In 1877, the white congregation sold the property to St. James AME Church, which had been organized in 1850. The church listed on the National Historic Landmark Register.
SUNDAY WORSHIP: 11a
ADDRESS: 1201 Cadiz Street, New Orleans, LA MAP
PHONE: 504-891-3488
WEBSITE: http://hisstpeterchurch.org‎