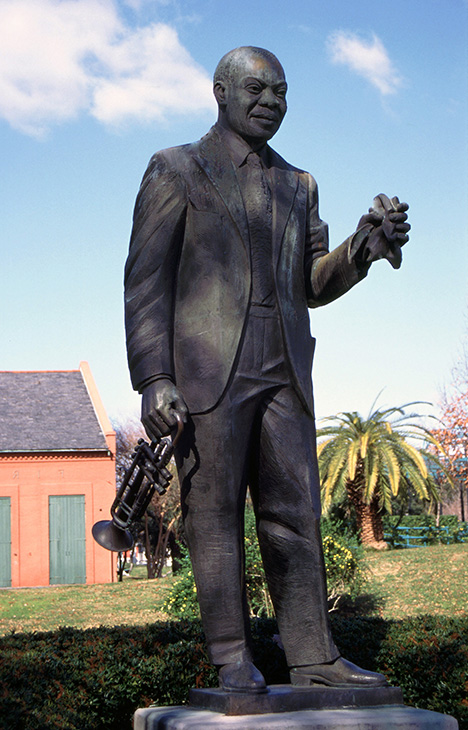 New Orleans – Birthplace of Jazz is a fitting moniker for a city that married West African rhythm, African-American Blues from slavery and Jim Crow Laws with European Classic music to form Creole flavor in a remarkable district called Storyville.

Many African-Americans found work and started businesses in New Orleans aside Free Persons of Color who already lived there. Simultaneously, light-skinned Creoles were proud to be schooled in the European arts of Classical music with its delicate chords. Creole musicians looked down on the unwritten music of their darker brethren. Increasing racism would soon alter their status and outlook on life.

In 1894, the infamous “White Act” was passed forcing Creoles, since they also had African ancestry, to lose their privileged status. Creole musicians, in order to continue working, mingled with African-American Blues musicians from Faubourg Treme. At the same time, Ragtime musicians looking for gigs arrived by riverboat from St. Louis and Memphis. A spicy mixture of West African drumming, high energy from Ragtime, structured chords from Classical music and Blues improvisation evolved into the musical gumbo known as Jazz.

Jazz was born in the Storyville section of Faubourg Treme, bounded by Basin Street, Iberville Street, Robertson Street and St. Louis Street. Storyville eventually gained its name after councilman Sidney Story who advanced city legislation to quarantine, but not prohibit prostitution in 1897. Given 24-hour bordellos, lax drinking laws and visiting plantation owners, money flowed. Political powers of the time enjoyed a windfall ownership of saloons, restaurant-bars and bordellos. You couldn’t have wine and women without song, so Black and Creole musicians were employed to keep the atmosphere banging.

As credited by early Jazz musicians who played for him and most Jazz historians, in 1895, Buddy Bolden (1877-1931) invented Jazz. He earned that distinction as the 1st Storyville bandleader of the music later to be called “Jazz.” Unfortunately, Bolden never recorded his music and in 1907, he was admitted to a mental institution for the remainder of his life. Without recordings or a credible biography, tales of his life are filled with folklore and confused by several others who later claimed to be the inventor of Jazz.

Soon after Bolden left the scene, other bandleaders and composers emerged to fill the leadership void of Jazz. Kid Ory, King Oliver and Jelly Roll Morton soon became the larger-than-life care-takers of Jazz.

As the city grew more sophisticated, public sentiment turned against blatant prostitution, excessive drinking and resultant crime. Hence, politicians were forced to close raucous Storyville in 1917. Most reputable jazzmen scattered to Kansas City, St Louis, Chicago and New York. Enough stayed to make a living, thereby sustaining the tradition and laying the Jazz roadmap for generations to follow. Of the Jazz musicians who stayed, they survived by playing on riverboats, upscale venues, making recordings and occasional tours to New York and Chicago.

By the 1930s, one unforgettable trumpeter, who sharpened his craft in King Oliver’s band, vaulted to international fame. Louis “Satchmo” Armstrong eclipsed his mentors as the first Jazz Ambassador of the world. We should also acknowledge that Sidney Bechet was Armstrong’s New Orleans contemporary whose compositions and masterful style set the foundation for generations of Jazz clarinet and saxophone players to follow.

Preservation Jazz Hall Band in the French Quarter reminds us of this important Jazz Heritage. The Marsalis Family, Pud Brown, Dr. Michael White, the Neville Brothers and Percy Humphrey also keep jazz in the vanguard of New Orleans culture at clubs around the city. Sometimes they just drop in spontaneously to jam in one of the city’s serious jazz clubs like Snug Harbor or Tipitina’s. Today, Jazz lists the world as its address. But every Louisiana Jazz musician comes home or out for New Orleans Jazz Festival.