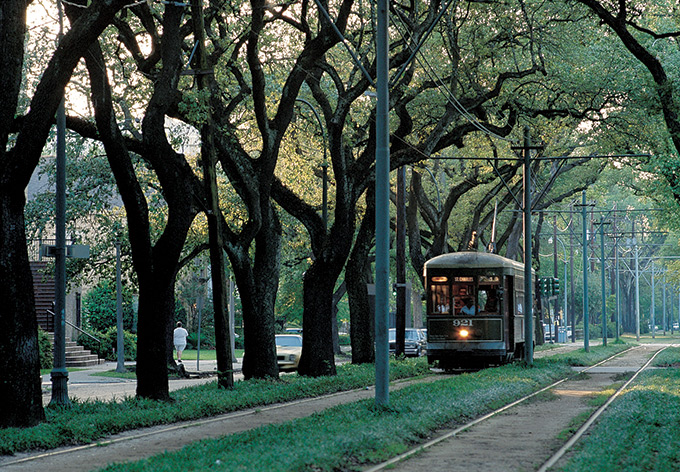 Airport Shuttle: (504-465-9780) available from MSY Airport to Downtown/French Quarter hotels for $12-15 per person. Ticket booths are on the lower level in the baggage claim area. Limousine Livery (504-561-8777) service from/to the airport features professional chaffeurs and service guaranteed to make you relax. Taxis: from MSY to the downtown New Orleans cost $25 for one person and $10 per passenger for three or more passengers. Pick-up is on the airport lower level, outside the baggage claim area. Otherwise taxis charge meter rate + $2.50 drop fee + $1 for each additional person. Car Rentals: Avis, Budget, Alamo, Thrifty, Hertz and National. When driving downtown, remember that the exit off I-10 Freeway to the French Quarter is marked Vieux Carre Exit 235B. Vieux Carre means “French Quarter.”

Built in 1954, Union Passenger Terminal on 1001 Loyola Avenue sits behind New Orleans Arena and sports a long waiting hall with an attractive mural. Unfortunately its predecessor, an architecturally distinctive train station built in 1892, was torn down in the same area, rather than restored. A utilitarian multimodal station has emerged to feature Amtrak, Greyhound, Taxis and Loyola Streetcar. Amtrak service is provided by three long-distance routes:

New Orleans Regional Transit Authority (NORTA) provides four vintage streetcar lines, which traverse through most visitor attractions. New Orleans has the distinction of running the oldest continuously operating streetcar in the world since 1835, St. Charles Streetcar. Streetcars cost less than $2 per ride and can be paid with exact change when you board. 1, 3 and 31-day unlimited ride Jazzy Passes are available for $3, $9 and $55 respectively. Three popular streetcar lines run frequently from 7a-11:30p. Adults and kids at heart love them. The lines intersect on Canal Street.

Streetcar lines run frequently from 7a-11:30p. Everyone loves them. The lines intersect on Canal Street and provide a carefree introduction to the city: NORTA STREETCAR SYSTEM MAP

St. Charles Streetcar: Covers a 13.2-mile route from Downtown past the splendid Garden District mansions, then through Tulane University and finally up to the Carrollton District. When you hear of people brag about riding a New Orleans streetcar in, this is the one.

Riverfront Streetcar: Covers a 2-mile route along the waterfront from the French Market to just beyond the Convention Center; this streetcar route began in 1988 and has expanded service due to tourist demand

Canal Streetcar: Board at the Aquarium of the Americas or at major hotels on Canal Street for a comfortable ride up to the small shops and restaurants in Mid-City, and continue to Uptown, Metarie Cemetery and City Park

If you easily get motion sickness, buy dramamine 30-60 minutes before a cruise. On a cruise, sit in the rear of the lower deck where motion sensation is reduced.

River Ferries
A fun way to cross the Mississippi River when you don’t want to venture far from the French Quarter or Downtown; get nice views of historic Algiers and New Orleans skyline on the return trip
ADMISSION: $1 for autos, pedestrians ride free
DAYS & HOURS: daily, every half hour from 6a-8p
ADDRESS: Canal Street Dock MAP
WEBSITE: http://friendsoftheferry.org

Cruise lines featuring journeys from New Orleans to the Western Caribbean are:

New Orleans Freeway Network: In normal traffic, the city is 100 minutes east of Baton Rouge and 60 minutes southwest of Biloxi, both off Interstate 10 Freeway. New Orleans retains its charm, in part, due to its limited number of freeways. Thus, traffic on I-10 westbound to MSY Airport is heavy during commute hours, major events or conventions. Before leaving your hotel, confirm that I-10 is moving normally. If not, consider using US 61 Highway as an alternative to MSY Airport. During heavy traffic, allow one-hour commute from Downtown to the airport plus 90 minutes before your flight.

New Orleans is blessed with two architecturally-distinctive cantilever spans over the Missisissippi River called the Crescent City Connection. The first span opened in 1958, while the second span opened in 1989. For a great view of the skyline drive over the bridge then back.