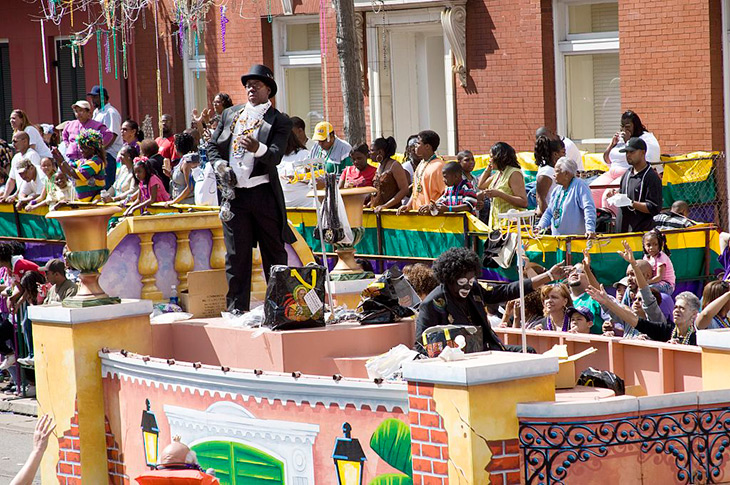 Loosely interpreted Mardi Gras means “Fat Tuesday.” It occurs on any date each year between February 3rd and March 9th. For those unfamiliar with Catholicism, it represents the last carnival before Ash Wednesday and 45 days of Lent. In Latin, Carnival means “farewell to the flesh.” While Mardi Gras is clearly pagan in origin, the Catholic Church legitimized it as a brief carnival before penitence in the season of Lent.

Although far from the oldest carnival of its type, having conducted 1800 carnivals since the first torch-lit parade in 1857, New Orleans special flava’ of Mardi Gras is based on the richest gumbo of races, money, cultures and history. Hotels are packed from Friday through Fat Tuesday. The last two weeks bring traffic jams during the first set of parades. Most city services shutdown. even the crime rate tends to be lower.

Nearly 20,000-costumed Krewe members parade on elaborately decorated floats and play music to the screaming jubilation of onlookers. Each Krewe member pays $250-$850 in annual dues to fund their float. Each Krewe maintains a secret theme and captain until the night of Mardi Gras. Furthermore, each Krewe operates autonomously within the parade. Talk about spontaneity! Separately purchased trinkets by Krewe members are dispersed to party revelers, particularly those in costume or scantily dressed women. The most commonly thrown trinkets have Krewe names. Adding to the festive atmosphere are debutante balls held throughout the city.

You are bound to see a lot of purple, gold and green, the official colors of Mardi Gras. The most common parade route extends along St Charles Avenue then turns right on Canal Street through downtown, Nevertheless, its wise to check a local newspaper to confirm the final route.

Mardi Gras is an event to be experienced rather than understood. Skip the logic or morals of it. If you really like to party, attend at least once in your life. But if nudity and raucous behavior offend you, don’t approach Bourbon Street. Police are only present to prevent violence and obvious theft. Consider these Mardi Gras tips:

• Book a hotel room 6 months early
• Bring a costume or rent one in advance
• Wear comfortable shows and layered clothing
• Parking along the parade route is impossible, so take streetcar, taxi or walk
• Arrive along the parade route before 7:30 am for best viewing
• Most nudity and lewd behavior occurs on Bourbon Street, which is a madhouse
• Consider standing near parade ending at Chartres or Royal Streets.

The Zulus were founded in 1909 as the first Black Krewe. Their costumes and themes mocked dominant White society of the time. Of all the gifts you can receive during Mardi Gras, the Zulu’s gilded coconut is still the most prized.

Mardi Gras Indians evolved as a mixture of Native American and African American cultures. The Black Indians are organized around neighborhood tribes. Each tribe is known for its flamboyant, intricate costumes, marching bands and choirs.