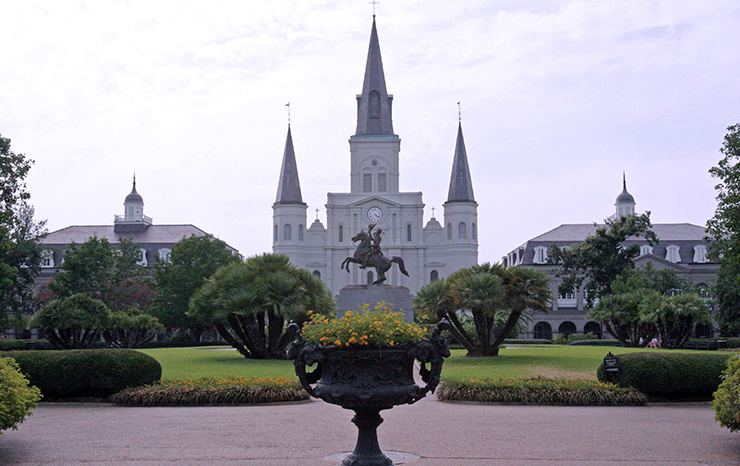 The French Quarter’s story begins in 1699 when two French brothers, Iberville and Bienville, came to colonize Southeastern Louisiana. Today, that story is a gumbo of culture formed by more than three centuries of conquests, changing demographics and changing social mores.

By 1704, Iberville built a fort on Lake Pontchartrain in what is now the New Orleans district called Spanish Fort. Bienville preferred a shipping port along the Mississippi River, so in 1718 he built a nub of town in what is now the French Quarter. Hence, their names are on two historic streets in New Orleans. By 1722 Bienville commissioned a block grid street plan, making New Orleans one of the first planned cities in America. Like equally historic Charleston and Savannah, the plan featured small squares set within a grid of blocks bounded by Decatur Street, Canal Street, Rampart Street and Esplanade Avenue. Unlike Charleston and Savannah, which have early British influence, the earliest architecture were Spanish and French.

When Spaniards took control in 1762, they introduced streetlights to the French Quarter. The devastating fire of 1788 nearly destroyed the Quarter, including the St. Louis Church and the prison. With an opportunity to rebuild to their liking, Spaniards introduced their architectural style to many buildings. In 1794, another fire exacted punishment on the district. Wiser from it all, the Spanish introduced building codes requiring fire-resistant materials. For this act of preservation, we could easily call it the French-Spanish Quarter. But from 1800 to 1803 when the French resumed control, they solidified the French name Vieux Carre (“Old Square”), as an alternative to Americans’ preference to call it the French Quarter.

Later in 1803, the United States of America purchased Louisiana. Americans began flooding the French Quarter due to the booming cotton, sugar and slave trade passing through its port. Unable to hold such a populace in the French Quarter and adjacent Faubourg Treme’ and Faubourg Marigny, New Orleans grew outwards. In this booming period of economic growth, New Orleans developed the unique housing pattern of Anglo-Americans occupying houses fronting the streets of a square block, while African-American servants occupied dwellings in the center of the block. That pattern persisted until the 1950s.

Like many Southern cities, Yellow Fever epidemics in the 1850’s, Civil War after-effects in the 1860s, and economic decline in the 1890s exacted a toll on the architecture, street work and attractiveness of the French Quarter.

But the roaring 1920’s attracted bars, art galleries, and theatres again. Brick-lined streets were repaired, electric streetlights were installed, and in 1925 the City passed its first ordinance to preserve a portion of the Quarter. Not long afterwards the French Market was rebuilt and a commission was established to protect architecture in Vieux Carre. Along the way civic leaders pleasantly discovered that historic preservation, along with a larger dose of restaurants, bars, boutiques and galleries, enhanced tourism. Famous writers began hanging out the French Quarter, including Tennessee Williams who wrote the play that became the movie, A Streetcar Named Desire. Portrait and landscape artists began frequenting on Jackson Square, an activity that continues today. And of course, every large party ends on Bourbon Street.

Bawdy and lusty, sublime and repentant, live-for-today, yet patient as a biblical Job, the French Quarter occupies the same 6 x 13 block grid originally laid out in 1722. Holding that manicured boundary for nearly 300 years despite the oil-boom skyscraper frenzy west of Canal Street in the 1970s and 80s, is a story worth printing by itself.