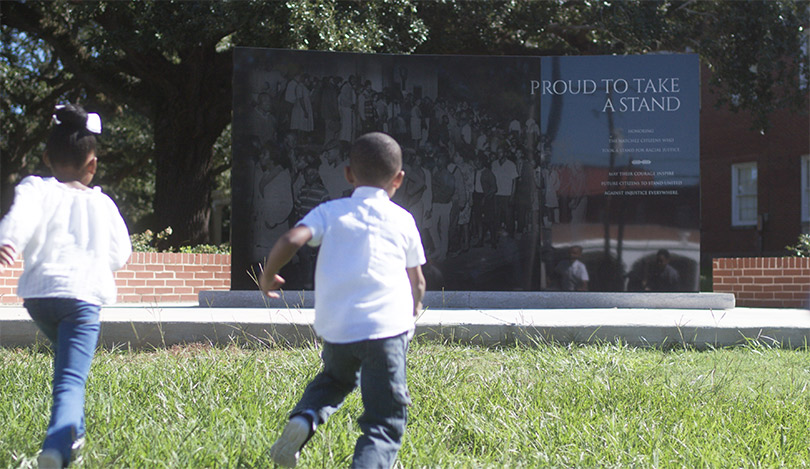 Natchez was not the site of the working plantations. But it was home to many of the nation’s prominent cotton planters. Their plantations were located North in the Mississippi Delta, South and West in Louisiana’s flatlands. Natchez served as the marketplace where our nation’s most valued export was traded — cotton. Enslaved people cooked, cleaned, tended to the cotton planter family needs, cared for livestock, drove carriages, and operated small gardens for plantation owners. Natchez also was the home to the largest population of free people of color in the State of Mississippi before the Civil War.

Silver Street
Also called Natchez Under the Hill, this area served as the region’s early port. It was also where many enslaved people were first introduced to the Natchez area upon their arrival on river vessels. Unfortunately, it was a site where even free blacks were at times, kidnapped and sold into slavery. Trade and commerce were the cornerstones of this area’s activity. It was also a “Gentlemen’s Paradise” where booze, barroom brawls, gambling and prostitution were commonplace. A change in river course destroyed much of the area, and many streets in the area were forever lost to the river’s new flow. Today, Natchez Under the Hill is home to the river’s incredible views, delicious food, and shopping.

Fort Rosalie
DESCRIPTION: The fort was founded nearly 60 years prior to the signing of the U.S. Declaration of Independence. The French first introduced the first people of African origin in what would later become the Mississippi Territory to establish this settlement in 1716. By 1723, the settlement at Natchez had 303 inhabitants, including 111 African-Americans, 1/3 of the total population. By 1729, there were more than 200-300 enslaved people in the Natchez area. This site is now a National Historical Park.
WEBSITE: https://www.visitnatchez.org/business/fort-rosalie

Melrose
DESCRIPTION: Built in 1847, Melrose is one of the grandest pre-Civil War estates in Natchez and is presently owned and operated by the National Park Service. The survival of the slave houses and the dependency buildings, including a kitchen, dairy, cistern houses, smokehouses, privy, barn & stable, and carriage house, makes Melrose an essential site for studying African-American history. The lives of two former slaves, Jane Johnson and Alice Sims, provide an important bridge in interpreting that history. Alice Sims lived to the age of 96 and died in the 1930s. Jane Johnson died at 103 in the 1940s. Much of their lives revolved around the operation of Melrose. After Melrose’s owner died in 1883, the house was left in Johnson’s and Sims’ care for almost twenty years. Today, you can experience self-guided tours and roam the grounds of this historic estate.
WEBSITE: https://www.visitnatchez.org/business/melrose

Forks of the Road
DESCRIPTION: Although no remnants of the slave markets remain, the Forks of the Road, is named for the conversion of three major roads leading into the City of Natchez, once the second-largest slave market in the South. When the cotton business increased after the War of 1812, there was a pressing need for a labor force to handle the demand. Here, thousands of enslaved people of African descent were bought and sold in support of King Cotton, making area planters among the nation’s wealthiest men. When the Union Army entered Natchez area in 1863, the site was used as a haven for the newly emancipated people and barracks for some of the U.S. Colored Troops. This site will be soon included in the Natchez National Historical Park.
WEBSITE: https://www.visitnatchez.org/business/forks-of-the-road

Zion Chapel AME Church
DESCRIPTION: Built in 1858 by the First Presbyterian Church to serve African-Americans and rural white people, the Greek Revival structure was sold in 1866 to the AME Church. At the time of the sale, the Reverend Hiram R. Revels served as pastor. During Reconstruction in 1868, Revels was elected alderman in Natchez, and in 1869 he was elected to represent Adams County in the Mississippi State Senate. In January 1870, Revels gave a remarkable opening prayer to the legislature. John R. Lynch was quoted as saying that prayer was “one of the most impressive and eloquent prayers that had ever been delivered in the Senate Chamber was made by Hiram Revels, a United States Senator. He made a profound impression upon all who heard him. It impressed those who heard it that Revels was not only a man of great natural ability, but that he was also a man of superior attainments.” Revels was elected by a vote of 81-15 to fill the last year of an unexpired term in the United States Senate. This seat was once filled by Jefferson Davis, the former President of the Confederate States of America. Thus, making Hiram Revels the first African-American to serve in either house of the United States Congress in 1870. Upon his return to Mississippi in 1871, Hiram Revels became the first President of Alcorn College (Alcorn State University today).
WEBSITE: https://www.visitnatchez.org/business/zion-chapel-african-methodist-episcopal-church

Proud To Take a Stand Monument
DESCRIPTION: This monument honors those Natchez-Adams County citizens who were wrongfully incarcerated in October 1965 for standing up for their Civil and Voting Rights. The monument has more than 400 names engraved into the marble. More than 150 of those are names of the young men and women forced to the Mississippi State Penitentiary at Parchman in 1965, where they were humiliated, punished and abused for days. They became known as the survivors of what is called “The Parchman Ordeal.” This Civil Rights monument helps tell part of the Civil Rights history of Natchez and the South in general.
WEBSITE: https://www.visitnatchez.org/business/proud-to-take-a-stand-monument

Museum of African American History & Culture
DESCRIPTION: The African American Museum of History and Culture contains exhibits from several Natchez related African American historic sites, influential citizens, and events. Other exhibits within the museum include The Rhythm Nightclub fire, where over 200 African American Natchez citizens were either burned or trampled to death. Forks of the Road, which was the second-largest slave market in the South; and some of the literary works of critically acclaimed author Richard Nathaniel Wright, a Natchez native. Adding the African American Museum of History and Culture to your trip itinerary will provide you with a look at another dimension of Natchez history that you won’t get anywhere else.
WEBSITE: https://www.visitnatchez.org/business/natchez-museum-of-african-american-history-and-culture

Broadway
DESCRIPTION: Also know as Natchez Bluff, a picturesque location overlooking the Mississippi River, has been a meeting and assembly site for generations. From this location, newly emancipated people of color began the march to Haller Nutt’s Longwood to celebrate freedom at the Freedmen’s Picnic in 1867. This was, to date, among the largest assembly in the history of the Natchez area. During the Depression-era, blacks would gather here to secure day-work when available. Today, there is a beautiful park and a historical marker dedicated to the life of Richard Wright, and a memorial to the tragic Rhythm Club Fire of 1940.
WEBSITE: https://www.visitnatchez.org/business/bluff-park