You are here: Home1 / U.S. Cities2 / Nashville3 / Slave Life at the Hermitage 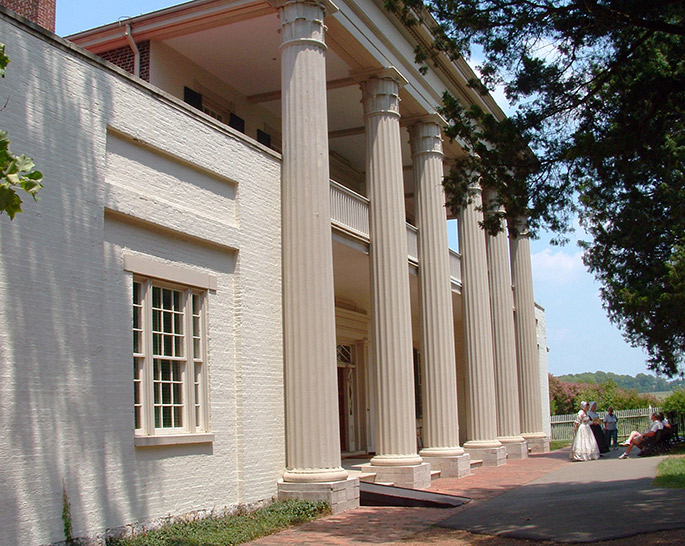 Slave Life at the Hermitage

The Home of President Andrew Jackson began as a two-story farmhouse when Jackson purchased the property in 1804. But by the time of his death it had been transformed into an elaborate Presidential plantation encompassing close to 1,100 acres with a beautiful mansion built in 1837, and a thriving, self-sufficient farm including a cotton gin and press, dairy, carriage shelter, distillery and slave cabins.

A visit to The Hermitage includes a tour of the museum, house, grounds and the heirloom garden that is home to the tombs of Andrew and his wife Rachel; The most striking thing here is the great deal of attention paid to the history of the slave families that worked and resided here. Detailed exhibits include numerous photos, personal possessions, fishing tools, guns, knives and more that describe the existence of these tireless individuals who are credited with the success of the farm.

Although all forms of slavery were harsh, Jackson was known to respect some requests of his slaves and rarely allowed a slave to be sold. He reportedly often went to great lengths to keep slave families together, and provided them with money and other amenities for a less harsh lifestyle.

In the beginning, Jackson operated the farm with nine slaves. That number grew close to 40 by 1820. Although Jackson was away quite a bit once he was elected as the seventh President of the United States in 1829, The Hermitage continued to thrive and the slave population continued to grow. Jackson returned to The Hermitage at the end of his presidency and by the time of his death in 1845, somewhere between 150 and 160 slaves worked and lived on the property in dozens of brick and log slave cabins scattered around The Hermitage property. Although the majority of them worked the fields, some were well trusted and worked as personal servants, head cooks, nurse, Blacksmiths and in other important positions in the operation of the plantation.

Historians at The Hermitage say that the types of artifacts found suggest that the slaves may have even had some measure of control and choice in their day-to-day living. And, that by reviewing letters, plantation records, census documents, and other materials, they have accumulated over 500 names of Hermitage slaves and their descendents, many of the latter coming there to find traces of their heritage. The state was less than a decade old when Jackson purchased The Hermitage property near Nashville in 1804. Over the next four decades, using enslaved labor the land was transformed into a plantation with a beautiful Greek Revival mansion as its centerpiece.