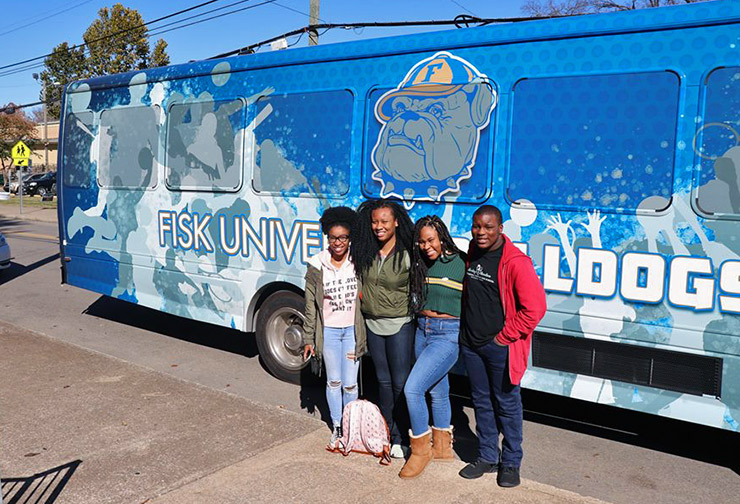 Civil Rights Room of Nashville Public Library
DESCRIPTION: Located in the Main Library is one of the finest collections of Civil Rights Movement history in the country. This room was designed to capture the drama and history of the mid-1940s and 1960s when thousands of Nashvillians came together in a nonviolent campaign to eliminate racial segregation. The focal point is a circular table symbolic of the Nashville sit-ins at lunch counters downtown. Visitors can read more than 100 significant milestones in Civil Rights Movement history covering local and national events, which wrap around the countertop. The timelines illustrate year-by-year summaries of events that brought dramatic social change in Tennessee and America. The room also features an audio/video area of films on early Black history in Nashville, including the story of Nashville school desegregation, the Martin Luther King, Jr. March on Washington Speech, the history of the modern civil rights movement anthem and other films. A Veteran’s History Project will tell the story of the many unsung heroes and unheard voices of African Americans during World War II and the Korean War.
ADMISSION: Free
DAYS & HOURS: Mon-Thu 9a-8p, Fri 9a-6p, Sat 9a-5p, Sun 2a-5p
ADDRESS: 615 Church Street, Nashville, TN MAP
PARKING: garages and lots nearby
PHONE: 615-862-5782
WEBSITE: http://www.library.nashville.org

Meharry Medical College
DESCRIPTION: Organized in 1876 as the medical department of Central Tennessee College, Meharry Medical College was the first medical school established for African Americans in the nation. It is the largest private institution training of black health care professionals. Meharry was named for the family that gave liberally towards its financial support. In 1900, the name was changed to Meharry Medical College of Walden University, and in 1915, a separate charter was granted to Meharry by the State of Tennessee. In 1931, having outgrown its old plant at First Avenue South and Chestnut Street, Meharry moved to northwest Nashville near Fisk University. The 26-acre North Nashville campus includes four schools: Medicine, Dentistry, Graduate Studies, Allied Health Professions. Hubbard Hospital, dedicated to George Hubbard, is the primary clinical teaching facility for the college.
ADDRESS: 1005 D.B. Todd Blvd, Nashville, TN MAP
PHONE: 615-327-6111
WEBSITE: http://www.mmc.edu

National Baptist Publishing Board
DESCRIPTION: Established in 1896 by Rev Richard Henry Boyd, a founder of Citizens Bank and Secretary of the Home Mission Board of the Negro National Baptists Convention. The board quickly became one of the largest business enterprises owned and operated by Blacks in the US. Still in family hands, the National Baptist Publishing Board produces over 14 million books and periodicals a year. The book catalog includes some secular topics, though now called R.H. Boyd Publishing. After the Civil War, Boyd became a rough–riding cowboy in Texas. He taught himself to read and write. He was baptized and accepted his calling to the Gospel ministry. In 1865, R.H. Boyd helped to organize the Texas Negro Baptist Convention and he organized and pastored several churches in Texas. In the 1870’s, he attended Bishop College in Marshall, Texas and with others, organized the Western Baptist State Convention and he became Educational Secretary of the Texas Negro Baptist Convention and a moderator for the Central Baptist Association in 1879. In 1895, Boyd and the Texas General Missionary Baptist Convention, first sought to establish a means of supplying Sunday School literature to black Baptists in the state of Texas. Dr. R.H. Boyd arrived in Nashville in 1896. He discussed his dream and recruited Rev. C.H. Clark to help whim with Christian education publishing for African Americans. In 1897, Dr. Boyd and a band of faithful associates, working out of a cramped two-room suite, completed their first mailing, which included 5,000 circular letters, order blanks, and return envelopes. In 1897, the company moved to their first real offices in the Brown Building, before permanently locating to the Victorian-style W.H. Leickhardt house on Market (now Second Avenue) and Locust Streets. Today, R.H. Boyd Publishing is an internationally recognized producer of Christian education materials.
DAYS & HOURS: call for appt
ADDRESS: 6717 Centennial Blvd, Nashville, TN MAP
PHONE: 615-350-8000
WEBSITE: http://www.rhboydpublishing.com

National Museum of African American Music
DESCRIPTION: This national scope museum will trace the history of black music in Nashville, Tennessee and the nation. This 56,000 square foot facility is located at the Avenue of the Arts in the redevelopment project of the former Nashville Convention Center. Situated in the heart of downtown Nashville, NMAAM is within walking distance to the Country Music Hall of Fame, Bridgestone Arena, and the Ryman Auditorium.
DAYS & HOURS: Coming in 2019
ADDRESS: Commerce & Fifth Avenue, MAP
WEBSITE: https://www.nmaam.org/