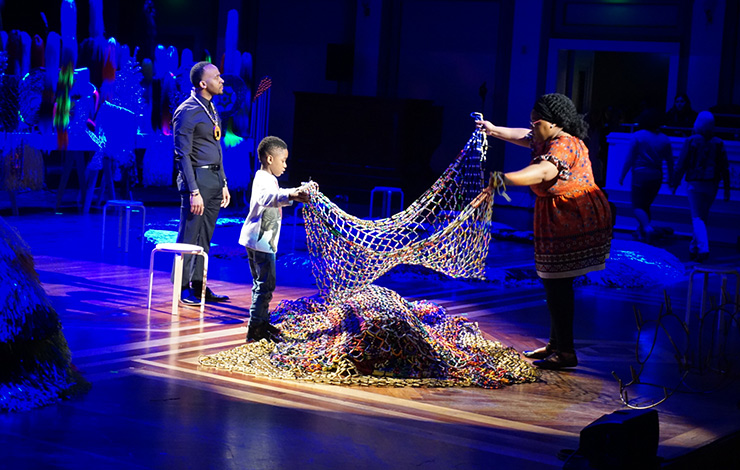 Country Music Hall of Fame and Museum
DESCRIPTION: Focusing primarily on the evolution of the genre, the Country Music Hall of Fame and Museum is an unforgettable experience for Country Music lovers. Rare costumes, instruments, archival films and photographs, interactive exhibits, manuscripts, a wide variety of memorabilia and more tell the story of Country music from its early roots to the present day. A major exhibition and fine example of community outreach is Night Train to Nashville: Music City Rhythm & Blues, 1945-70, which focuses on the city’s Rhythm & Blues peak years, an underreported, least understood era in the history of Country music, and the evolution of Nashville as Music City. Night Train encompasses photographs, vintage television clips, sound recordings, artifacts, text narratives and more, revealing how—in the decades after World War II, Nashville was a home to both Country and Rhythm & Blues music scenes. Arranged in distinct chapters, the exhibit is devoted to the roots of Nashville R&B, the city’s live music scene, the influential radio and recording industries, R&B on television, and the songwriters’ and performers’ strong ties to Nashville Country music community, earning Music City a unique place in music history. The depth at which the Country Music Hall of Fame and Museum presents the significance of R&B music and its performers at this time in history, demonstrates how closely many great African American performers were linked to both the history of the city and country music.
ADDRESS: 222 Fifth Avenue South, Nashville, TN MAP
PHONE: 615-416-2001 or 800-852-6437
WEBSITE: http://www.countrymusichalloffame.com

Ryman Auditorium
DESCRIPTION: First opened as a church in 1892 by Captain Thomas G. Ryman, it became a National Historic Landmark when the Grand Ole Opry show moved here in 1943. It has also become the “Mother Church of Country Music.” When the Grand Ole Opry show moved to its new home by the Gaylord Opryland Resort and Convention Center in 1974, the Ryman stood vacant for 20 years. It was restored and re-opened in 1994 as a glorious landmark. Today, visitors can embark upon a self-guided tour of the building and view a myriad of portraits, newspaper clippings, videotapes and original signed event posters as part of the permanent exhibit that traces the building’s legendary history. Those desiring to record their own CD may do so live in the Ryman Recording Studio, the site of the original ticket office. “Singers” here can choose from a number of songs including classics by Patsy Cline, Hank Williams, and George Jones and a sound engineer will record them to tracks performed by professional Nashville studio musicians. Over the years the Ryman has hosted world-renown talent ranging from Roy Acuff to Chet Atkins, Minnie Pearl, Elvis Presley, Johnny and June Carter Cash, Ray Price, James Brown, Marian Anderson, Dolly Parton, Emmylou Harris, Barbara Mandrell, Al Green and Jerry Lee Lewis just to name a few. Today, the Ryman features Country, Rock, Alternative, Gospel, Pop, Classical, Jazz and Bluegrass performances, as well as musical theatre from contemporary performers such as India Arie, Harry Connick Jr., Erykah Badu, Sheryl Crow and Lenny Kravitz.
BOX OFFICE & TOURS: daily 9a-4p
ADDRESS: 116 Fifth Avenue North, Nashville, TN MAP
PARKING: many pay lots are nearby
PHONE: 615-458-8700 or 615-889-3060
WEBSITE: http://www.ryman.com

Frist Art Museum
DESCRIPTION: Opened in 2001, this magnificent venue anchors Nashville’s expanding visual arts scene. It occupies former main post office building, a 124,400-square foot art deco building on the National Register of Historic Places. Even if there were no art inside, the building’s interior is a feast for the eyes. New modern art and classical art exhibitions arrive every 6 to 8 weeks, so there is always something new in its spacious galleries. The Frist was conceived as a family-friendly place, particularly the innovative Martin ArtQuest Gallery. It’s a colorful space alive with learning through art making art for ages. Make a print, paint your own original watercolor, create your own colorful sculpture! ArtQuest is free with gallery admission for adults and always free for youth 18 and under. Stop by the Frist Art Museum Gift Shop for a comprehensive array of art prints, books, educational materials, blown glass, pottery and jewelry by local and regional artisans. The wide price range fits every budget. The Café also features delicious homemade soups, desserts, salads, and sandwiches, making it a popular gathering place for lunch, plus dinner on Thursday and Friday evenings when the Frist stays open until 9pm.
ADMISSION: see website for pricing
DAYS & HOURS: Mon-Wed 10a-5:30p, Thu-Fri 10a-9p (ArtQuest closes at 5:30p), Sat 10a-5:30p, Sun 1p-5:30p
ADDRESS: 919 Broadway, Nashville, TN
PARKING: many lots nearby
PHONE: 615-244-3340
WEBSITE: https://fristartmuseum.org/

Schermerhorn Symphony Hall
DESCRIPTION: Home to the Nashville symphony and among the best acoustically-engineered venues of the world, the new Symphony Hall completes a quadrangle of entertainment options in downtown. It was inspired by some of the world’s great concert halls, with its shoebox designed 1,860 seats and natural interior light through 30 soundproof windows. Seats are distributed over three levels, including a special choral loft behind the stage. The hall’s namesake is Music Director and Principal Conductor Kenneth Schermerhorn from 1983 until his death in 2005.
ADDRESS: One Symphony Place, Nashville, TN MAP
PARKING: valet parking in front; garage at the new Pinnacle at Symphony Place
PHONE: 615-783-1200
WEBSITE: http://www.nashvillesymphony.org

Grand Ole Opry
DESCRIPTION: What began as a simple radio broadcast in 1925 is today a live entertainment phenomenon honoring country music’s rich history and present. It showcases a mix of country legends and the contemporary stars. The Opry is Nashville’s #1 attraction. Tours are often available daily from February through October. On evenings in which there is only one Opry performance, tours are available immediately after the show.
BOX OFFICE: its best to book online, see website
ADDRESS: 2804 Opryland Drive, Nashville, TN MAP
PARKING: free on premises
PHONE: 615-871-6779
WEBSITE: http://www.opry.com

Tennessee State Museum
DESCRIPTION: More than 60,000 square feet of exhibits tracing the history of Tennessee and the nation from prehistoric Indians through the Civil War into the early 1900s. Special displays of Tennessee quilts, silver, weapons, paintings and pottery. Military History Branch Located in the War Memorial Building as a tribute to all veterans, the Military Museum features an exhibit on America’s involvement in foreign wars from the Spanish American War to World War II. Displays include weapons, uniforms and battle histories.
ADDRESS: 505 Deaderick Street, Nashville, TN MAP
PHONE: 615-741-2692
WEBSITE: http://www.tnmuseum.org

Ascend Amphitheater
DESCRIPTION: Opened in July 2015, Chicago and Earth, Wind & Fire were the second group of artists to perform at this amphitheater inside the Metro Riverfront Park and beside the Cumberland River. Its also the main venue during music festivals. The venue has 2,300 fixed seats and room for 4,500 on the lawn for 5,800 total capacity. Live Nation operates the venue during concerts.
ADDRESS: 301 First Avenue South, Nashville, TN MAP
PHONE: 615-999-9000
WEBSITE: https://www.ascendamphitheater.com