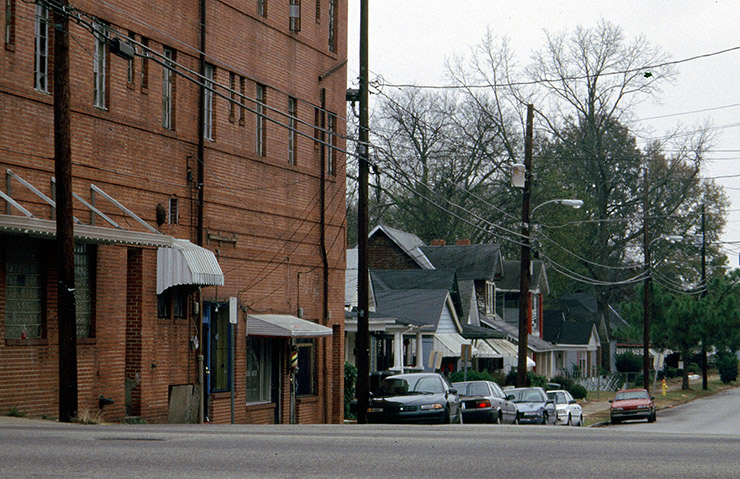 252 Montgomery Street
DESCRIPTION: On 1 December 1955, Rosa Parks boarded the bus on Dexter Avenue at Court Square after a long workday as a seamstress at Montgomery Fair Department Store. After the bus traveled three blocks, it stopped at 252 Montgomery Street, where Rosa Parks was forced to leave the bus for violating the city’s segregation laws and arrested. When found guilty on 5 December 1955, Rosa Parks was fined $10 plus a court cost of $4. She appealed the case. The Montgomery Bus Boycott was triggered by her arrest and became the third major event of the modern Civil Rights Movement. The first major event, Brown vs. Board of Education Supreme Court Decision in May 1954 provided a legal basis for the boycott and other protests to end Jim Crow practices in America. The second major event was the brutal murder of Emmitt Till in Mississippi in August 1955, followed by his open casket funeral in Chicago — whose photograph was published in nearly every black newspaper and magazine. The site where Rosa Parks was physically removed from the bus is now home to Rosa Parks Museum & Library at Troy State University. Rosa and husband Raymond Parks, a barber and NAACP worker, were living at 634 Cleveland Court at the time of her arrest.
ADDRESS: 252 Montgomery Street, Montgomery, AL MAP

Court Square
DESCRIPTION: Despite its mundane plaza appearance today, this was a slave auction site before the Civil War. equally important, it is the location of Montgomery Fair Department Store where Rosa Parks worked until the day of her arrest on 1 December 1955.
ADDRESS: Dexter Ave at Commerce Street, Montgomery, AL MAP

Rev. Dr. Martin Luther King, Jr. Residence
DESCRIPTION: Dexter Avenue Baptist Church Parsonage was Rev. King’s residence from September 1954 to February 1960. Rev. King was new to Montgomery when Rosa Parks was arrested on 1 December 1955. Rev. King hadn’t developed any enemies or debts, which made him a natural to lead the Montgomery Improvement Association who organized of the bus boycott. Nevertheless, leading the bus boycott put the King family at risk. On 31 January 1956, a bomb exploded on the front porch of this home, knocking out two front windows. Though inside the house, his wife and oldest daughter were uninjured. King was leading a mass meeting at First Baptist Church several blocks away when the bomb went off. After rushing home, a huge agitated crowd gathered in front. Rev. King quickly settled them down and sent everyone home peacefully. The home is restored to look as it did when the King family lived here.
DAYS & HOURS: 9a-4p Mon-Fri; 9a-2p Sat
ADMISSION: $3 adults & $2 children under 12
ADDRESS: 315 South Jackson Street, Montgomery, AL MAP
PHONE: 334-261-3270
WEBSITE: http://www.dakmf.org

First Ladies of Montgomery Bus Boycott Marker
DESCRIPTION: Its so easy to think of Rosa Parks as the Mother of the Montgmery Bus Boycott, but that would be untrue. Mary Fairbanks, M.B. Bradford, Jo Ann Robinson, Aurelia S. Browder, Mary Louise Smith, Claudette Colvin, and Susie McDonald played pioneering roles before Rosa Parks. These heroic women did so without support from the NAACP. In 1949, Mary Fairbanks, chair of the English Department at Alabama State University, formed the Women’s Political Council of Black Women in Montgomery. In 1950, M.B. Bradford was arrested in Montgomery in violation of bus segreagation laws and Jo Ann Robinson, after being mistreated on a Montgomery bus, became President of Womens Political Council, then vowed to dismantle segregation laws. In 1955, Claudette Colvin and Aurelia S. Browder were arrested/forced to give their seats to white riders. A marker honoring Aurelia Browder and the other ladies is placed in front of her home.
ADDRESS: 1012 Highland Avenue, Montgomery, AL MAP
WEBSITE: http://www.aureliasbrowder.com

Centennial Hill Historic District
DESCRIPTION: In it’s heyday, it was the neighborhood for prominent black homes and businesses. Today, this district has national importance because the residents of this community put up the first money to fund the Montgomery Bus Boycott before national money rolled in to help. Its nexus was the intersection of Jackson and High Streets. Malden Brothers Barbershop is one of the oldest remaining businesses in the district.
ADDRESS: Jackson Street at High Street, Montgomery, AL MAP

Nat King Cole’s Residence
DESCRIPTION: Childhood home of Nat King Cole (1919-1965), the great singer famous for such songs as “Mona Lisa” and “The Christmas Song”; Nat King Cole was the first Black entertainer to own a home in Beverly Hills and the 2nd to have their own national TV program; now part of Alabama State University, curbside viewing only
ADDRESS: Hall Street at Tuttle Street, Montgomery, AL MAP

Dexter Avenue King Memorial Baptist Church
DESCRIPTION: In 1877, the church was founded in former slave trader’s pen. In 1879, the church’s trustees purchased this lot for $270 on the corner of Dexter Avenue and Decatur Streets. In 1887, the first registration of students for Alabama State University (then “Alabama Colored Peoples University”) was held in the lower level of the church. The Church’s first name, Second Colored Baptist Church, was later changed to Dexter Avenue Baptist Church, when Market Street name-changed to Dexter Avenue in honor of Andrew Dexter, founder of the city. In 1978, the name was changed to Dexter Avenue King Memorial Baptist Church in memory of its 20th pastor, Rev. Dr. Martin Luther King who pastored here from 1954 to 1960 during the epicenter of the civil rights movement. The basement contains Dr. King’s original pulpit podium. In 1980, artist and Dexter deacon John W. Feagin, painted a 10′ x 47′ mural in the church basement depicting scenes of Dr. King’s leadership in the Civil Rights Movement from Montgomery to Memphis. There are select memorabilia available in the church gift shop as well. A small donation is requested to enter.
DAYS & HOURS: tours Mon–Fri 10a–4p, Sat 10a-2p
SUNDAY WORSHIP: 11a
ADDRESS: 454 Dexter Street, Montgomery, AL MAP
PHONE: 334-263-3970
WEBSITE: https://www.dexterkingmemorial.org

Holt Street Baptist Church
DESCRIPTION: Now called Holt Street Church of Christ, an estimated 5,000 Montgomery citizens met here on 5 December 1955 to launch the Montgomery Bus Boycott. As such, it played one of the most critical roles of the Civil Rights Movement in America. In his speech that night, Rev. Martin Luther King, Jr. described the mistreatment of black bus passengers and the civil disobedience of Rosa Parks, and then justified the nonviolent protest by appealing to African-American Christian faith in love and the American democratic tradition of legal protest. Following King’s address met with applause, Rev. Edgar N. French of the Hilliard Chapel AME Zion Church introduced Rosa Parks and Fred Daniel, a student at Alabama State College who had been arrested that morning on a disorderly conduct charge. The charge for allegedly preventing a white woman from getting on a bus was later dismissed. The congregation moved to 1870 South Court Street, while the original church is being renovated.
DAYS & HOURS: open for tours
ADDRESS: 903 South Holt Street, Montgomery, AL MAP
PHONE: 334-263-0522
WEBSITE: https://www.holtstreetmemorialbaptistchurch.net

Mount Zion AME Zion Church
DESCRIPTION: The Montgomery Improvement Association was formed and Rev. Dr. Martin Luther King, Jr. was named its president at this church. During the Selma-to-Montgomery civil rights marches in 1965, marchers rested at the church on their way to the Alabama State Capitol, hence its inclusion on the Selma-to-Montgomery National Historic Trail. The church congregation moved to a new location at 455 West Jeff Davis Avenue in 1990. In 2002, the building was added to the U.S. National Register of Historic Places. Sides of the building are decorated with murals depicting Dr. Martin Luther King, Rosa Parks, and the Selma-to-Montgomery marches. This historic site will reopen in 2020 as a museum.
DAYS & HOURS: TBD
ADDRESS: 467 Holt Street, Montgomery, AL MAP
PHONE: 334-265-9361
WEBSITE: coming

First Baptist Church
DESCRIPTION: Found in 1867 as an alternative to discrimination African-Americans faced at the other First Baptist Church in the city; from 1952 to 1961, the church was led by civil rights activist Rev. Ralph Abernathy — a good friend of Rev. Dr. Martin Luther King, Jr.; John Lewis, who had been active at American Baptist College and Fisk University in Nashville, Tennessee, was planning to enroll at Troy State University in an attempt to desegregate the school, and was invited to Montgomery; at First Baptist Church he met Abernathy and Dr. King; on 21 May 21 1961, the church was a refuge for Freedom Riders who were violently met at Montgomery Greyhound Bus Station; filled with 1500 worshipers & activists, the building was besieged by 3000 whites who threatened to burn it with Dr. King, Abernathy, Wyatt Tee Walker, and James Farmer also there; a call was placed to U.S. Attorney General Robert F. Kennedy while bricks were thrown through the windows; RFK quickly sent U.S. marshals to keep the mob at bay until later dispersed by the Alabama National Guard; events that day played a crucial part in the desegregation of interstate travel that we take for granted today.
ADDRESS: 347 North Ripley Street, Montgomery, AL MAP
PHONE: 334-264-6921
WEBSITE: coming