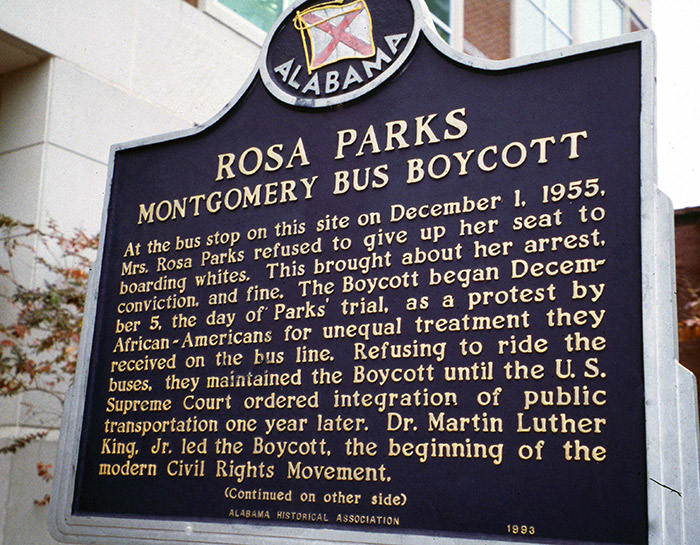 Though the Supreme Court’s Brown vs. Board of Education decision established a critical legal precedent for the Civil Rights Movement in 1954, and the killing of Emmitt Till in August 1955 awakened Black America to rise up, events unfolding in Montgomery established the more powerful, non-violent activist phase of the movement.

In 1954, a brilliant 24-year old Dr. Martin Luther King, Jr. became pastor of the Dexter Avenue Baptist Church, located next to the State Capital. On the same capitol steps where Jefferson Davis was sworn in as president of the Confederacy, Rev. King announced to the media that Black citizens would begin the Montgomery Bus Boycott on 5 December 1955.

Dexter Avenue Baptist Church, Holt Street Baptist Church, Mount Zion AME Zion Church and First Baptist Church formed the epicenter of Civil Rights Movement consisting of strategy, organized tactics and non-violent protest. When local seamstress and NAACP member Rosa Parks was arrested for refusing to give up her seat to a white man on segregated buses, the Montgomery Bus Boycott marked the first large-scale Black opposition to segregation of public facilities. For more than a year protesters stayed away from buses and traveled to work on foot or by private vehicles. With the help of local NAACP official Dr. E.D. Nixon, who was known as the “Father of the Montgomery Bus Boycott,” the boycott became one of the city’s most unforgettable events leading to the desegregation of Montgomery buses. It provided a model for civil rights activism throughout the country and the world.

On three separate occasions, protesters attempted to march from Selma to Montgomery to highlight segregation practices that prevented African Americans from voting in southern states. On 7 March 1965, the first march set out from Brown Chapel A.M.E. Church toward Montgomery. But when marchers reached the Edmund Pettus Bridge, they were brutally attacked by Alabama state troopers. Among those brutalized was John Lewis a leader of the Student Non-violent Coordinating Committee. That attack was seen on TV all over the world. The day became known as “Bloody Sunday”, which had a harsher context than today. On 9 March 1965, Dr King, Rev. Abernathy and other civil rights activists were more determined, but the second march to Montgomery was “peacefully” turned around at the base of Edmond Pettus Bridge based on credible threats of more Bloody Sunday violence, including gunfire, if they proceeded.

President Johnson implored Dr. King to wait at least until 11 March 1965 when he could get a federal judge to overturn the local ruling designating their right to march illegal. After that date, President Johnson could order National Guard to provide security for the marchers. Johnson also delivered on his promise to Dr. King to propose a new Voting Rights Act to Congress on 17 March 1965.

As days passed, religious leaders and celebrities announced their support for the 3rd march. So on 21 March 1965, Dr. Martin Luther King, Jr., John Lewis, Rev. Ralph Abernathy, Rev. Fred Shuttlesworth, Ralph Bunche were joined by Rabbi Abraham Joshua Heschel, Rabbi David Teitelbaum, Rabbi Israel Dresner leading the five-day trek under the watchful eye of “federalized” national guardsmen ordered by President Johnson. Marchers slept outside in tents, as each night’s sleeping area along Highway 80 became known as “Tent City.” At the end of their 54-mile journey, civil rights heroes marched up steps tp the Alabama State Capitol in Montgomery to deliver a message to the State of Alabama and by media, to Congress, that now was the time for legally mandated voting rights for all citizens.

Governor George Wallace held that his state’s government would not budge. But the well-publicized march and other momentum in the Civil Rights Movement pressured Congress to enact the Voting Rights Act in August 1965. As incredible as it seems today and it is worth repeating, the momentous Act of Congress finally provided legal support for a African American citizens’ right to vote.

On 12 November 1996, the U.S. Congress established the Selma-to-Montgomery National Historic Trail through an amendment to the National Trails System Act. Beginning at Brown Chapel AME Church in Selma, the trail follows the route of the march through Lowndes County along Highway 80 and ending at the Alabama State Capitol in Montgomery. Markers, parks and Lowndes Interpretive Center chronicle those events.

Today, tourism representatives want visitors to see Montgomery as part of the “New South”, where citizens of all races are working together for the common good. And where tourists from all over the world can honor the struggles of the past, while they look to the future. It’s not just Black History, it’s American History. More importantly, the right to vote enabled hundreds African-Americans to reach elected offices. One of the the best voting gem was delivered in 2000, when James Perkins, Jr. defeated a nine-term incumbent to become Selma’s first African-American mayor.