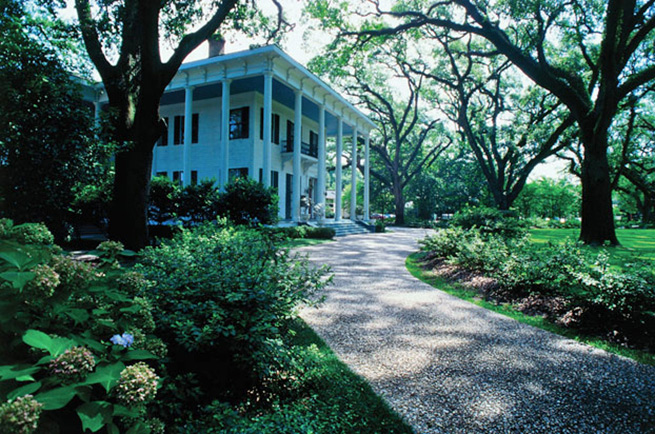 Slave Market Site
DESCRIPTION: Since the cities founding a century slave-holders met to trade slaves for commerce on this site. Though federal legislation officially ended the importation of slaves in 1808, there were flagrant violations of the law until 1860. Slave trade remained very active in Mobile for decades longer.
ADDRESS: St. Louis Street at Royal Street, Mobile, AL MAP

Bragg-Mitchell Mansion
DESCRIPTION: Built in 1855, the Bragg family split their time between this Mansion and their cotton plantation in Lowndes County outside of Montgomery. Judge Bragg died in 1878, and four additional families have owned the home since his passing. The last private owner was the A.S. Mitchell family who purchased the home and property in 1931 and occupied it until 1965 — during that time, the Mansion became an icon of the city. This restored twenty-room mansion is adorned with period furnishings, artwork, double parlors, a lavish dining room, stenciled moldings and grounds with Mobile’s trademark live oaks and azaleas. Given its contruction period and location, a number of Black craftsmen were involved in building this National Historic Landmark.
ADMISSION: $5 Adults, $3 students and children
DAYS & HOURS: Tue–Fri 10a-4p
ADDRESS: 1906 Springhill Avenue, Mobile, AL MAP
PHONE: 251-471-6364
WEBSITE: http://www.braggmitchellmansion.com

Hawthorne House
DESCRIPTION: Built in 1853, the house — a rather simply detailed Gulf Coast Cottage — was occupied by the Reverend Joshua Kedar Hawthorne, a White minister who moved to Mobile from Conecuh County where he reputedly worked with free Black churches.
ADDRESS: 352 Stanton Road, Mobile, AL MAP

Mount Vernon Arsenal-Searcy Hospital Complex
DESCRIPTION: Called Fort Stoddert in 1799, it was renamed Mt. Vernon Arsenal in 1828. During the Civil War it was seized by Confederate troops, but was returned to the federal government after the war. Later the state legislature established Mt. Vernon Hospital to relieve overcrowding at Bryce Hospital, the state psychiatric facility. Mt. Vernon was designated exclusively for the care of the African-American mentally ill, until it was desegregated in 1969.
ADDRESS: Coy Smith Highway, Mobile, AL MAP

Africatown
DESCRIPTION: The heritage of a people brought from the Gulf of Guinea in West Africa to Mobile on a slave ship still lives on in Africatown. This area, about 3 miles north of Mobile, received its name because of its African population and culture. On the night of July 9, 1860, the slave ship Clotilde, headed by Captain William Foster, entered Mobile Harbor. Due to the outlaw of African slave trade since 1808, Captain Foster had to transfer the slaves from the ship into a riverboat to bring them into Mobile. He then burned and sunk the Clotilde. Once sold to those interested in the Clotilde expedition, these enslaved Africans–intelligent, hard-working and industrious people — created their own neighborhood at Magazine Point, a community that still lives on today. In fact, many descendants of Cudjoe Kazoola Lewis, the last survivor of the Clotilde, still reside here and a bust of him sits in front.
ADDRESS: Union Missionary Baptist Church, Plateau, AL MAP
PHONE: 251-433-8511