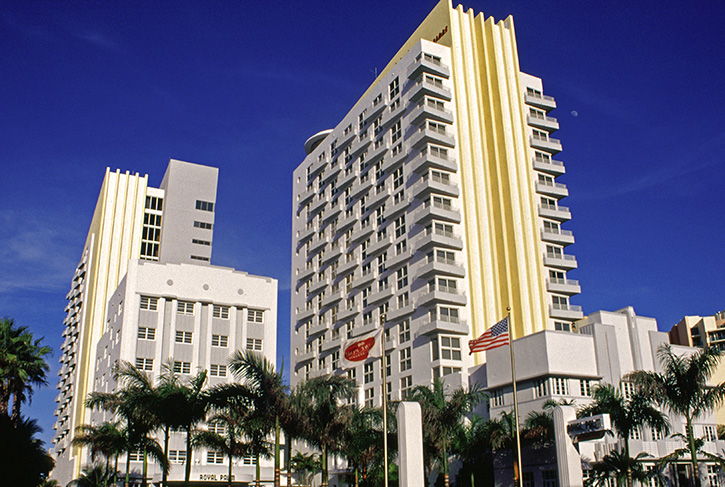 In June 1990, local politicians snubbed the newly freed Nelson Mandela during his visit to Miami on a seven-city tour of the United States. The incident outraged local Black activists and sparked a national Black tourism boycott of greater Miami that would last 1,000 days. Attorney and civic activist H.T. Smith envisioned a Black-owned luxury hotel on Miami Beach. He also had the integrity to not take hush money that would have derailed that grand vision. In May 1993, Smith led a civic and corporate group in presenting a 20-point plan to resolve the boycott. A key point of the plan was the development of an African-American majority-owned convention hotel in Miami Beach. Thus, a settlement was reached and the boycott ended. The Royal Palm project would be a central figure in the settlement.

As part of the boycott settlement, the Mayor and Commission of the City of Miami Beach approved the purchase of the un-restored Royal Palm Hotel. The city initiated a competitive bid process to develop an African American convention hotel project on the site of the Royal Palm Hotel. R. Donahue Peebles and world-renowned design firm Arquitectonica, were selected. During this time, Peebles initiated the purchase of the adjacent Shorecrest Hotel to increase space for the project.

Peebles overcame roadblocks that would have caused most other builders to abandon the project. The original Royal Palm Hotel was discovered to be in irreparable structural condition. Its reinforced concrete frame could not meet building code requirements, despite concerted efforts to preserve this National Historic Landmark. The Royal Palm had to be demolished in December 1998, with the unprecedented requirement that the seven-story historic building would be reconstructed on its original site, from its original plans, using original construction techniques, details and several artifacts.  Architectonica hued two distinctive 17-story towers and a 2-story horizontal lanai towards the ocean with 422-rooms behind the restored Royal Palm and Shorecrest hotels. The two new towers were designed to be expressive of their own time, yet compatible with the historic South Beach architecture.

The five structures of the Royal Palm Crowne Plaza Resort are sited around two courtyards. One court serves as the arrival plaza facing Collins Avenue, with a formal drive lined by Royal Palms leading to the main entrance to the hotel. A second court becomes the focal point to the Sunset pool and beach. The decorative stucco of two historic Royal Palm and Shorecrest hotels preserve the character of the original 1930s hotels and provide a continuity of human scale and architectural detailing along the Collins Avenue frontage. Behind these structures rise the towers.

From a distance, the tower rooftops provide a distinctive skyline along Collins Avenue. The circular Shorecrest tower plays off the angular new tower of the Royal Palm. Their design elegantly integrates Art Deco with a new architectural expression. The two-story lanai frames the tropical garden as tall glass walls reveal the garden from the ballroom’s pre-function areas and the galleries leading to the ocean view restaurant.

When opened in May 2002, the Royal Palm featured 150 suites. It was the first full-service luxury hotel in America to be owned, developed and managed by African Americans. As typical for hotels these days however, the Royal Palm has been sold to a large international hotel chain.