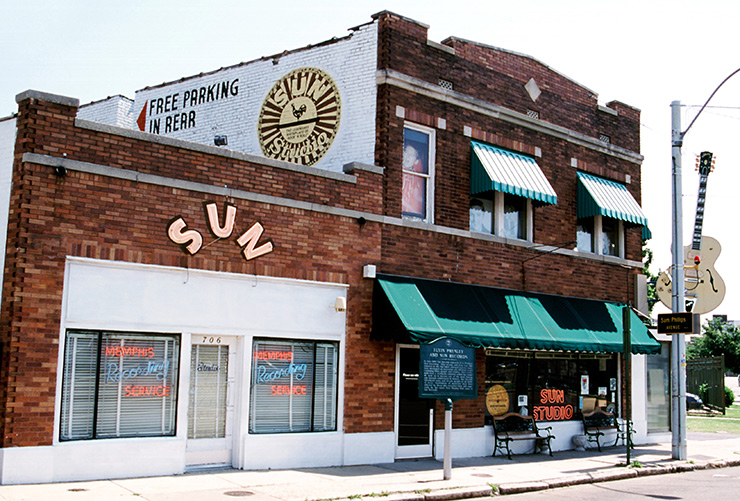 Rock n’ Roll was not invented in Memphis, nor by a Memphis recording artist. That honor belongs to Louis Jordan and his Tympany Five traveling band, who pioneered what was variously called “Jump Blues”, “Race Music” and “R&B” in the 1940s. Sun Studio Rock n’ Roll however, gave the fledgling musical genre its commercial launching pad.

White-owned music distributors and white DJs were comfortable with those names because it kept Jordan’s music mostly limited to sales in the black community, even though he performed before black and white audiences. In the 1940s, African-Americans originated the “Rock n’ Roll” idiom. The term euphemistically meant, engaging in sex. Louis Jordan was the first big name singer, songwriter and musician to use the term “Rock n’ Roll” describing his music and it evolved to mean sexy dancing. Since early R&B and Rock n’ Roll are the same music genre, the strongest case is made that Louis Jordan is the Father of Rock n’ Roll.

After acknowledging the above, you have to give props to a former DJ and white record producer in Memphis named Sam Phillips. entered the Memphis music picture in 1950. Phillips was arguably, the first White Southern record producer to hire African American Blues artists — that spoke volumes about his vision as an entrepreneur when he founded SUN Record Studio. Having hired Rufus Thomas as his first recording artist in 1951, B.B. King, Junior Parker, Bobby Blues Bland and other Blues recording artists followed. A smart businessman, Sam Phillips was open to any musical artist and genre that made money. 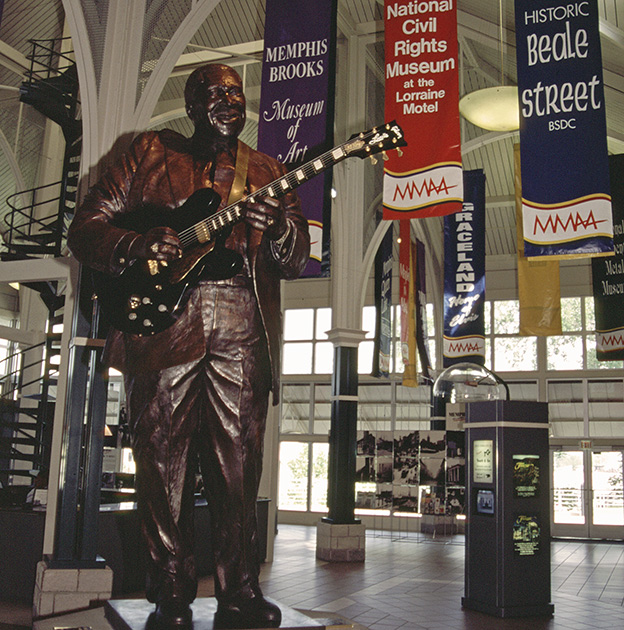 Sam Phillips stumbled into a song featuring with up-tempo rhythm by Ike Turner’s band and and lyrics performed with electric guitar by black vocalist Jackie Brenston in a 1951 Sun Records studio jam session. Sam thought the time was right to exploit this sound to both black and white music markets, so his studio recorded the song Rocket 88. This chart-topper had a danceable rhythm, strong lead vocals and lead guitar to drive the melody. A common practice at the time, Sun Records, a small record label in the South, sold distribution rights to a larger record label & distributer, Chess/Checker in Chicago for better marketing.

Although done for understandable reasons, this uptempo, guitar-led R&B piece (Rocket 88) was not marketed as an R&B song because it was published by a white record company (SUN Records) to white and black audiences alike. But for accuracy, Sun Records and to a lesser extent, Chess/Checker Records, deserve credit for elevating the commercial success of Rock n’ Roll records and artists to both black and white audiences nationwide.

Shortly after the success of Rocket 88, Sun Records began recording Ike & Tina Turner and other R&B artists. Black-oriented radio stations first promoted and Black record stores sold tons of R&B records, giving early recording artists their first decent paychecks. But few white-oriented radio stations would play it and few white-owned stores would sell it. So up-tempo, guitar-lick R&B was market-limited and classified as “Race Music” along with Blues and Gospel.

Ultimately, Sam Phillips benefited from a brilliant piece of marketing by white radio DJ and former musician in Cleveland, Alan Freed. A former musician and enthusiast of black music and idioms, Freed picked up on the Rock n’ Roll catchphrase for R&B from black audiences, then presented it as a new music genre to white audiences unfamiliar with the term in 1952. Thus, the original sexual meaning of Rock n’ Roll embraced by black youths morphed into a new idiom for both dance and music that sold like sun tan lotion to rebellious white youth of the 1950s.

To further convince white youths to join black youths purchasing up-tempo R&B records, SUN Records began recording R&B songs by white Rockabilly artists Carl Perkins and Jerry Lee Lewis. Some of those songs were originally written and performed by black artists, a practice called “covering.” Since they sold more ad time on radio, white-owned radio stations were eager to promote “R&B Cover” songs as though they were originals by white artists. Note the distinction, radio stations did that, not SUN Records. But even black artists from Memphis were reluctant to appear on album covers, in order for the record sales to better crossover to the far larger market of white consumers. This clandestine marketing scheme eventually got SUN Records discs placed on the shelves of Southern white retailers and increasingly more Northern retailers. As long as the checks kept coming, artists who composed and sang the songs had little choice but to go along with this artistically offensive scheme. Nevertheless, an indication that all market segments remained important to Sam Phillips is the promo picture of a young B.B. King and young Elvis Presley standing shoulder to shoulder at SUN Records.

Along that time, Chuck Berry and Bo Diddley made lead guitar a staple of Rock n’ Roll. Fats Domino and Little Richard did the same thing with piano. But black performers in Memphis who had an exciting stage persona delivered the greatest impact on young Elvis Presley who absorbed more black culture than Jerry Lee Lewis or Carl Perkins. Elvis was as comfortable around black folks in the 1950s as Bill Clinton was in the 1990s. To paraphrase Nelson George in his seminal book, The Death Of Rhythm & Blues, a pre-stardom Presley hung out on Beale Street and in Memphis’ black churches to inhale the vibe of Blues, R&B and Gospel artists down to the last detail. He dressed like them, styled his hair like them, ate Soul Food like them, talked like them, strutted like them, and sang like them. The Black idioms of Memphis were as one with Presley’s early persona to the extent that some candidly referred to him as a “White Negro.”

When one considers the potential of what could happen to Hip-Hop, it is important to emphasize the long term damaging of effects of covering with giving credit and royalties to the originators. When you hear the song Hound Dog, you should always consider it was writtten by white composers Jerry Leiber and Mike Stoller and originally recorded by black singer Big Mama Thornton, who made it a R&B hit with Black audiences. When Big Mama Thorton sang it, the song had explicit sexual connotations performed to a thunderously rhythmic beat. It became a watered-down, highly danceable performance by Elvis Presley. With massive radio and TV play, it is no surprise it became one of the most commercially successful songs of the era and a Rock n’ Roll anthem. Today, it is difficult to find a radio station that plays the original version by Big Mama Thornton, who should have reaped greater artistic and financial reward. The latter issue however, was a product of those segregated and unequal times, not SUN Records or Elvis Presley.

Elvis Presley was one of the world’s greatest entertainers and a humanitarian to all races, but marketeers confuse his commercial significance with his artistic significance, when they paper him with that all encompassing moniker, “The King” or “The King of Rock n’ Roll.” Black folks know Elvis is not The King, since he covered many early songs by black artists and genuinely adopted black cultural idioms. He was not the best at his adopted vocal style, nor was he the innovator of pelvis swaying on stage. The early Elvis Presley of Memphis was very charming and respectful of the artists that spawned his artistic evolution from Rockabilly to Rock n’ Roll, justifiably earning him adulation from fans of all colors. In fact, Elvis Presley openly and repeatedly credited black artists as inspiration for his style of stage dance and as the innovators of songs he covered by Arthur Crudup, Ray Charles, Little Richard and The Drifters. No wonder he had so many black fans and respect from those artists. 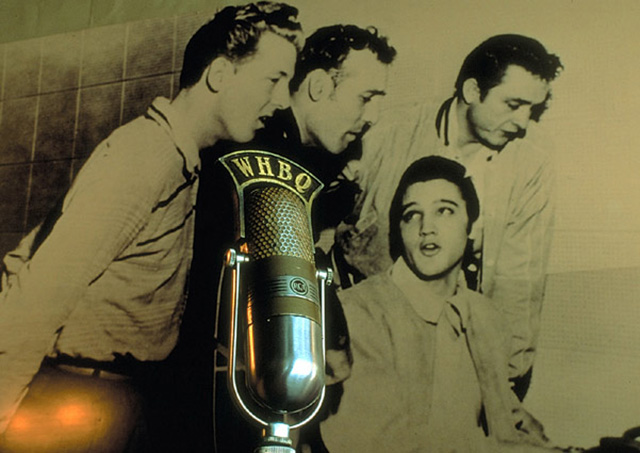 In spite of a huge hit called The Twist covered by Chubby Checker, by the 1960s, Rock n’ Roll evolved more to the sensibilities and idioms of European Americans and later, to Europeans. As a result, white youths sent the careers of Elvis Presley, Jerry Lee Lewis and Bill Haley on a stratospheric trajectory, while the innovators of Rock n’ Roll, such as Ike Turner, Little Richard, Fats Domino, Rufus Thomas, Bo Diddley, BB King and Chuck Berry achieved modest commercial crossover success, yet remained artistically durable.

Following someone else’s musical sensibilities and idioms has never been the modus operandi of a people who define “Hip.” So, developing Soul Music was next on the black agenda, even as Jackie Brenston became a footnote in music history.