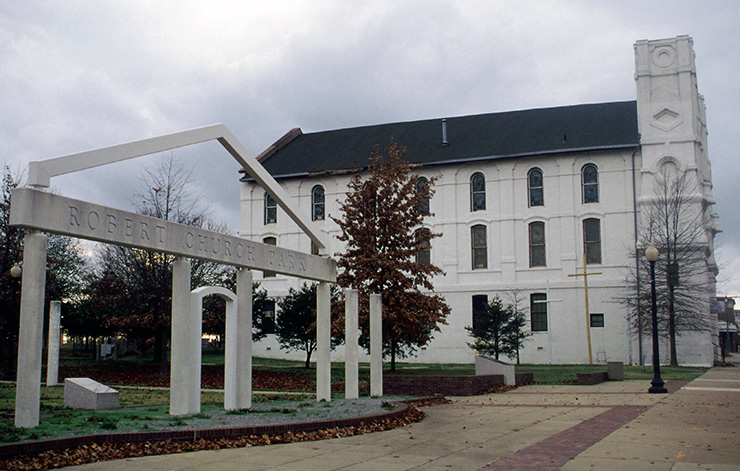 Memphis History begins when the region was first inhabited by the Chickasaw Indians. Some streets reflect their names as encountered by Spanish explorer Hernando de Soto in 1541. In an apocalyptic story typical of the Americas, control of the land passed from Native-American to Spanish to French to American control as a byproduct of wars, disease, reduction of food supplies and false treaties.

European immigrans arrived in larger numbers in the early 1800s, when Tennessee was admitted to the Union. They introduced slavery to power local cotton plantations. Memphis’ early economic infrastructure was based on its proximity to the Mississippi River and being largest city close to the Cotton Belt. Those traits allowed Memphis to become the leading cotton exporter.

The prospering City of Memphis, founded in 1819 by Andrew Jackson and two other Anglo-Americans, incorporated in 1826. Jackson later became president. The city’s name comes from the ancient city of Memphis, Egypt, which sits on the banks of a great Nile River.

Free people of color worked as servants and dock laborers. Many enjoyed full citizenship rights, until the government stripped their voting rights in 1834. Even the rights of free African Americans were threatened when the ban on the slave trade was repealed in 1840. Lack of proper ID and an unlucky encounter sometimes landed free persons of color into slavery. After this repeal, the city became a major hub for human cargo. How ironic that Memphis, named after a great African city, should become a hub for the slavery of Africans.

By 1857, Memphis and Charleston Railroad completed, linking the Mississippi River and the Atlantic Ocean. Plantation holders, railroad and Memphis export/import businessmen were making more money than ever. But life for free African Americans was very tough. Newly arrived, less qualified German, Irish, and Italian immigrants moved African Americans further down the job market food chain using a phalanx of newly legislated Black Codes. When the Civil War came in 1861, Tennessee sided with the Confederacy and a Confederate Army base was established in Memphis. That Confederate Camp was established on Beale Street.

The Union Navy defeated Confederate forces along the Mississippi River in a two-hour Battle of Memphis in 6 June 1862. For African Americans, life improved overnight as Union troops occupied the city for the duration of the war, liberated slaves and restored human rights. By Memphis falling so quickly, Union forces spared Memphis from the burning and looting endured by Vicksburg, Atlanta and Columbia after their hard fought campaigns. In 1865 the Memphis Freedman’s Bureau was established to assist the transition from slavery to freedom. In 1869 First Baptist Church was built on Beale Street. The Grand Lodge, an order of African American Masons, was established here in 1870. Then the bottom dropped out.

In 1878, a yellow fever epidemic claimed 5,000 lives and caused most European-Americans to exit. African-Americans, less susceptible to the disease, stayed. Robert Church Sr., acquiring Memphis land at bargain prices, would soon become the nation’s first black millionaire. Nevertheless, so many people exited by 1879, that Memphis declared bankruptcy and became a ward of the state. When the yellow fever scare subsided years later, European Americans returned. Racism reared its ugly head again. In 1892, Ida B. Wells reported against lynching and the conditions of public schools in her newspaper. Shortly afterwards, she lost her teaching job and the Klu Klux Klan burned her office down, droving Wells out of Memphis. Despite that setback, Robert Church Sr. and other Black Memphians, helped the city regain its charter in 1893.

African Americans persevered to create a thriving community, Beale Street, in the late 1890s. While most southern African-Americans would never consider voting for fear of retribution, in Memphis they registered to vote in large numbers as early as the 1920s. Race relations were helped in 1925, when Tom Lee, a black man who could not swim, risked his life in a small boat to rescue 32 European Americans on the M.E. Norman ship that sank in the Mississippi River. During this time, Memphis was on par with New Orleans, Atlanta, Durham and Richmond as a center for black commerce in the South. There were middle-income black communities in North Memphis, South Memphis, Orange Mound and Frayser districts.

Growing in city infrastructure and status again, in 1929, the Municipal Airport was completed. In 1931, Memphis’ first Cotton Carnival was celebrated. The city received an economic boost in 1934, when citizens opted to join the Tennessee Valley Authority electric system. The first community library for African-Americans opened in the same year. World War II efforts boosted the economy and population. In 1943, the Army Depot and Mallory Air Force Depot were built. By 1950, city population reached nearly 300,000. During the 1950s, Memphis was named the country’s quietest, cleanest, and safest city on several occasions under the big boss politics of E.H. Crump, its mayor of 45 years. By 1960, Memphis population reached 497,524. By 1963, Memphis had as many African-American registered voters as Anglo-American registered voters.

Memphis had fewer of the worst aspects of southern racism compared to neighboring Mississippi, Louisiana and Arkansas. Yet, one epic incident would scar city history. On 4 April 1968, King was assassinated at the Lorraine Hotel. A couple months later James Earl Ray was captured in the United Kingdom and later convicted of the assassination.

As school busing and fair housing took hold in the early 1970s, Memphis, like other cities was severely hurt by White Flight. This process weakened the tax base and school system. Yet, African-Americans from the Deep South continued migrating to Memphis for job opportunities. Despite being a large percentage of the population, they could not obtain significant political power until 1974, when they elected Harold Ford, Sr. to the U.S. House of Representatives. He was the first African-American from Tennessee to be elected to a national office.

In 1991, Memphis elected its first African-American mayor, Dr. W.W. Herenton. He successfully stewarded nearly $2 billion of public and private investment to the renaissance of downtown and several nearby communities. Memphis of today has public schools that are improving and a solid economy. As the super-sized Welcome Center and Beale Street crowds attest, Memphis has become an exciting tourist destination as well.