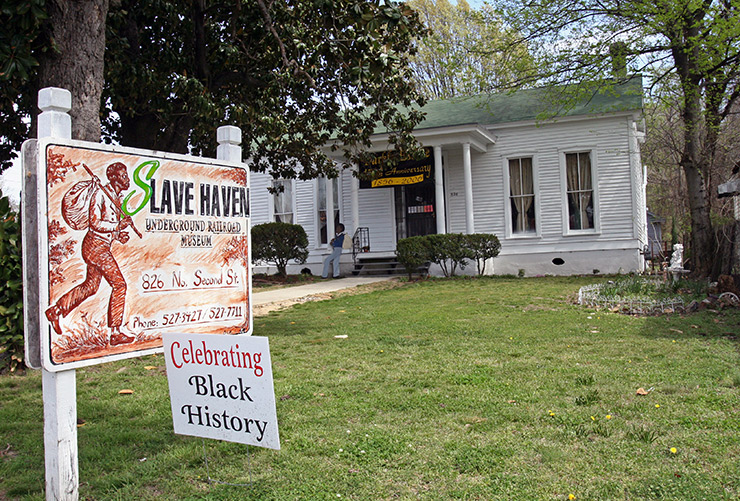 Auction Square
DESCRIPTION: Site of the first food market in Memphis. Since slave trade was a large common practice in Memphis, many believe the granite marker in the square was used for slave auctioning.
ADDRESS: Auction Street at Main Street, Memphis, TN MAP

Burkle Estate, Slavehaven
DESCRIPTION: A white painted no frills, wooden house built in 1849 served as one of Memphis’ most important stations on the Underground Railroad. By appointment, you can tour the cellar where people hid on the way to freedom.
ADDRESS: 826 North Second Street, Memphis, TN MAP
PHONE: 901-527-3427

Tom Lee Memorial
DESCRIPTION: In 1925, Tom Lee, an African-American who could not swim, risked his life in a small boat to rescue 32 Anglo-Americans from a sinking steamship 25 miles south of here. In gratitude, this monument and scenic riverside park were named in his honor. It is a frequent gathering place for picnics and kite flying.
ADDRESS: Riverside Drive south of Beale Street, Memphis, TN MAP

Hunt-Phelan Home
DESCRIPTION: Built mostly with the labor of enslaved people in 1828, several Civil War generals from the north and south made it an important stop in their travels. An on-site school was used to teach several hundred people how to read English by the Freedmen’s Bureau after their Emancipation.
ADDRESS: 533 Beale Street, Memphis, TN MAP
PHONE: 901-344-3166

Ida B. Wells Marker
DESCRIPTION: Named in honor of a journalist, civil and women’s rights advocate who spoke truth to power, Wells newspaper building was located in this vicinity before it was burned to the ground. Though she had to flee Memphis, her written achievements have far outlived her oppressors.
ADDRESS: 300 block of Beale Street, Memphis, TN MAP

Tri-State Bank of Memphis
DESCRIPTION: Organized in 1946 by A Maceo Walker and John A Walker. The bank’s original building was located at 386 Beale Street, where much of Black Memphis business and civil rights planning occurred.
ADDRESS: 180 South Main Street, Memphis, TN MAP
PHONE: 901-525-0384

Lorraine Hotel
DESCRIPTION: This National Historic Landmark is where Rev. Dr. Martin Luther King was assassinated on 4 April 1968. His second floor balcony room remains in a permanently restored state from the day he passed. Fortunately, the site was saved from the wrecking ball in 1982 by a group of citizens who got a different ball rolling; they established a foundation to raise funds for the property. Eventually, the labor union which benefited from Dr King’s last march, a Black bank, and a local merchant next door added funds to purchase this landmark property for $144,000. The foundation convinced the City of Memphis, Shelby County, state agencies and corporations to provide more funds to build a civil rights center that educates visitors about the past, present and future of the American Civil Rights Movement while preserving the hotel. Enter via the National Civil Rights Museum.
ADDRESS: 450 Mulberry Street, Memphis, TN MAP
PHONE: 901-521-9699

Tri-State Defender Newspaper
DESCRIPTION: Founded 1905 as part of the Sengstacke Newspaper chain based in Chicago. There is no better way to get straight talk about black life in Memphis. Located just around the corner from the Lorraine Hotel, they were the first journalists on the scene when Dr King was assassinated and thus, may have the best written accounts of what happened on that fateful day in April 1968. There is no better source to get straight talk about Black Memphis today.
ADDRESS: 124 East Calhoun Avenue, Memphis, TN MAP
PHONE: 901-523-1818
WEBSITE: http://tsdmemphis.com