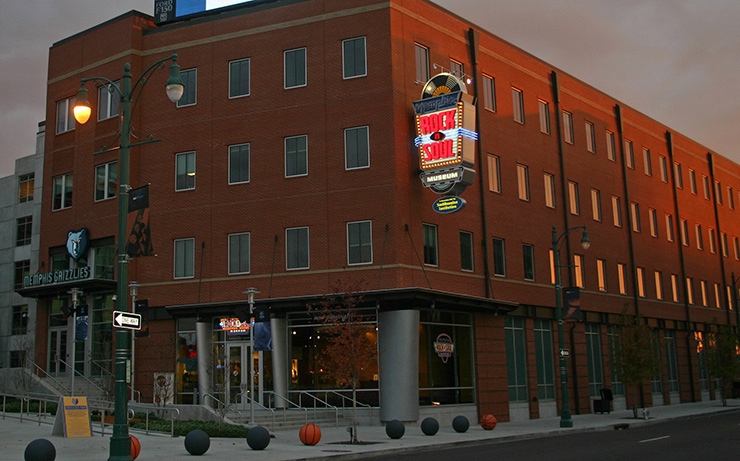 Rock n’ Soul Museum
DESCRIPTION: Began as a Smithsonian Institution traveling research project to uncover and showcase the roots of American music, it was founded in the same building as the Gibson Guitar Factory in 2000, before moving to this location in 2004. Take a 2-hour tour of Smithsonian exhibit of the musical and cultural history of Memphis and the Mississippi Delta. It may well be the most comprehensive look at the roots of the music we celebrate today. Of critical importance among the museum’s exhibits is its coverage of the many musicians, radio stations and businessmen who broke segregation barriers that permeated society in the 1960s and earlier, while furthering the Blues, then creating Rock n’ Roll and Soul Music.
ADMISSION: $10 Adults, $7 Ages 5-17, Ages 4 and under enter Free
DAYS & HOURS: daily 10a-7p
ADDRESS: 191 Beale Street, Memphis, TN MAP
PHONE: 901-578-5199
WEBSITE: http://www.memphisrocknsoul.org

Center for Southern Folklore
DESCRIPTION: This cultural documents the history and traditions of the South, both good and bad; history buffs will like the exhibits which showcases some of the best music, books, folk art and photography. The multimedia archives uncover more insights on this captivating slice of Americana. Performance Hall hosts small concerts performed by Blues, Rockabilly, Jazz, Soul, Roots, Hip-Hop and Gospel artists. The Folklore Store will well stocked for avid gift shoppers. The Center also sponsors the hugely popular Memphis Music & Heritage Festival and is a Folklore factory incubator to help create new businesses for local artists of all stripes, so the vibe can only be positive and creative.
ADMISSION: varies by event
DAYS & HOURS: Mon-Wed 10a-10p, Thu-Sat 10a-11p, Sun 10a-5p; winter hours are shorter
ADDRESS: 119 South Main Street, Memphis, TN MAP
PHONE: 901-525-3655
WEBSITE: http://www.southernfolklore.com

University of Memphis Art Museum
DESCRIPTION: One of America’s most notable and authentic Egyptian artifacts collection, some date as early as the pre-Dynastic period (4000-3200 BC). It includes a permanent collection of West African masks. The museum is located on the north side of campus, near parking.
ADMISSION: Free
DAYS & HOURS: Mon-Sat 9a-5p
ADDRESS: 3750 Norriswood, Memphis, TN MAP
PHONE: 901-678-2224
WEBSITE: http://www.amum.org

Pyramid Arena
DESCRIPTION: If only visually, feel the power of the pyramid in this unique 32 story arena and former home court for University of Memphis basketball team. Built in 1991, tour the Pyramid’s 20,142-seat interior is used primarily for concerts and religious events and there’s still speculation about its future use. A dramatic stone replica of the King Ramesses II statue stands in front.
DAYS & HOURS: tours Mon-Sat 10a-5p
ADDRESS: Pyramid Arena, Memphis, TN MAP
PARKING: garages and lots on premises
PHONE: 901-521-9675
WEBSITE: none

Orpheum Theatre
DESCRIPTION: Built in 1928 on the site of another theatre it rings with opulence. The tasseled brocade draperies, crystal chandeliers, gilded moldings and a Wurlitzer pipe organ are just a few of its new amenities common to the great Vaudeville Era. As Vaudeville’s popularity waned, live performances at the Orpheum declined and was purchased by a movie theater chain in 1940. It ran movies until 1976. With the growth of suburban malls and cineplexes, it was nearly demolished, then in 1977 the Memphis Development Foundation purchased The Orpheum and began bringing Broadway Productions and concerts back. From 1982-84 it was renovated to its grand 1928 opulence. Since then, Broadway productions, Johnny Mathis, Gladys Knight, Kenny G, Chuck Mangione, Patti LaBelle and too many others to name have performed here. Ballet Memphis and Opera Memphis, also call the Orpheum home.
BOX OFFICE: Mon-Fri 9a-5p
ADDRESS: 203 South Main Street, Memphis, TN MAP
PARKING: garages and paid lots nearby
PHONE: 901-525-7800
WEBSITE: http://www.orpheum-memphis.com

Mud Island Amphitheatre
DESCRIPTION: Seats 5,000 seats along the bank of the island from a stage set near the Mississippi River. Entertainers perform on the stage with stars overhead, nighttime breezes off the river, and the downtown Memphis skyline in the background. No outside coolers or beverages should be brought into the event.
BOX OFFICE: Tue-Sun 10a-4p and later for showtimes
ADDRESS: 125 North Front Street, Memphis, TN MAP
PARKING: paid lots and garage nearby
PHONE: 901-576-7241
WEBSITE: http://www.mudisland.com/concerts.asp