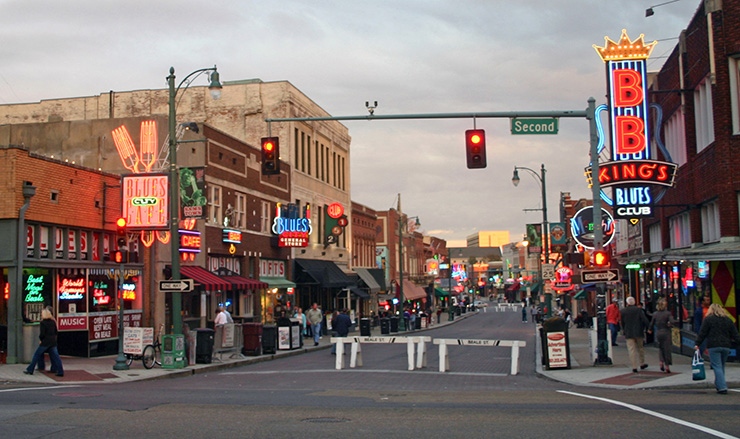 Although a welcome attraction, don’t let today’s Beale Street fool you into thinking of it as a multicultural entertainment district. The collective history of this district as a nationally significant religious, business, cultural and social focal point makes Beale Street a National Historic Landmark. In fact, few cities so clearly point to a black historic district and its African-American leaders as critical to their international identity.

In 1869, during the Reconstruction Era, First Baptist Church, with a Black congregation opened on Beale Street. In the 1870s, Robert Church began acquiring properties in the area surrounding and including Beale Street. Robert Church’s business acumen saved the City of Memphis. Church also built an auditorium and founded a public park on Beale Street.

After the Yellow Fever setback, Memphis’ wealth accumulation resumed as a distribution and commercial center of the South by 1890. Beale Street enjoyed its share of the bounty. A substantial number of black-owned businesses popped up on Beale Street. In 1893, George Jackson opened his pharmacy here, equivalent to opening a major supermarket today. Other businesses ranged from beauty salons to accountants to doctors and laundry service.

In the early 1900s, African-Americans from the cotton fields of the Mississippi Delta brought the Blues with them. The Blues spoke of their hard-scrabble existence after slavery and the nearly as bad as the Sharecropping Era which followed.

In response to their cultural needs, Juke Joint nightclubs grew like weeds along Beale Street. Commercial competition between bands and clubs gave the Blues a polished form. With his land development and entertainment businesses abloom, Robert Church opened Solvent Savings Bank in 1906, which by 1921, claimed to be the largest black-owned bank in the world.

As the reputation of Beale Street grew for being a thriving ecosystem of Black religious, commercial, and cultural venues, wealthier residents and visitors supported church expansion and two large theatres. The Palace Theatre was the largest show house for black audiences in the South. The Lincoln Theatre was the first theatre established solely with black capital.

Along this time, W.C. Handy visited Memphis. He combined business and artistic acumen to lead nightclubs Beale Street, primarily from Second to Fourth streets. With Church’s nightclubs on sound financial footing to hire him, W.C. Handy refined, promoted and distributed the Blues, as the next a great American art form. For this reason Beale Street, though it did not invent the Blues, is revered as the Home of the Blues and W.C. Handy is considered the Father of the Blues. 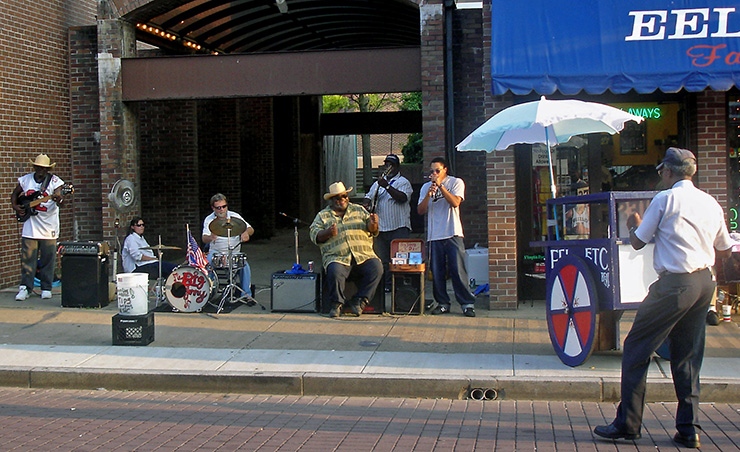 From 1954-1970, churches in Beale Street Historic District, such as First Baptist, Clayborn Temple AME, and Collins Chapel CME were critical meeting places during the Civil and Labor Rights Movements. These churches along, with Mason Temple COGIC, funded the organized civil and labor rights activists who put their lives on the line to make Memphis and America better. During Dr. King’s last days in Memphis, the labor rights protest marches ran through Beale Street, then up Main Street to City Hall.