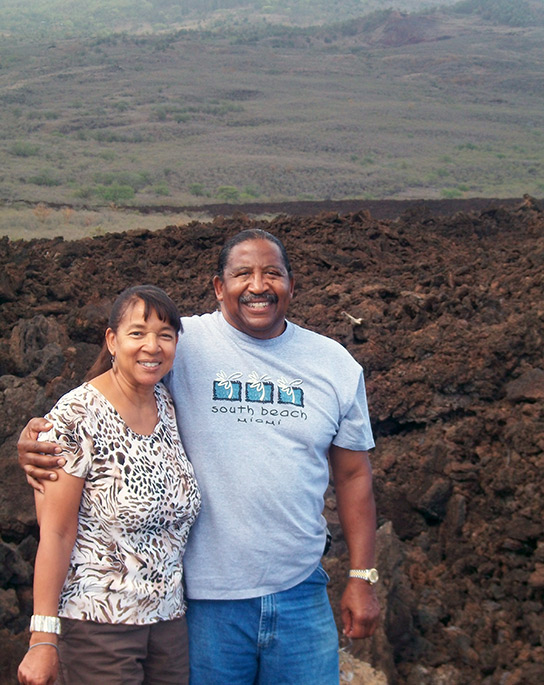 Bonding with the Soul of Maui

Conversation and laughter fill the dining area of “Da Kitchen,” a popular restaurant tucked away in an unassuming strip mall in Kihei. Angela Smith, president of the African-American Heritage Foundation of Maui, and her husband, Lovie, sit at the head of three tables pulled together for an impromptu meeting of the group. When I learned the foundation existed, I scheduled a visit with Angela and Love. They graciously invited Surlene and me to break bread at one of their favorite eateries.

Angela and Lovie started vacationing on the island annually after their first visit in 1988. “When the plane door opened, the wind engulfed me, the sun kissed me and the water said, ‘come here,’” she says. Like most of the members, they eventually gave up the mainland completely because Maui proved too tempting to resist year round.

Their presence brings a lot of soul to an island with an African-American population of less than one percent. The foundation coordinates a host of afro-centric activities, including a parade to commemorate Martin Luther King, Jr.’s birthday on the third Saturday in January. The event draws about 3,000 residents of all races and ethnicities.

Each February, Angela takes two black history exhibits she created to the libraries of high schools to ensure local young people are educated about how African Americans have contributed to this country. The foundation also awards scholarships, holds a Kwanza celebration and serves as a general resource for African Americans in Maui.

“As far as black people on the island, we come from many different backgrounds, many different economic levels and many different mind sets,” she says. “And if you just let it be known that you’re in need, we pitch in and help.”

The foundation has 22 members, including individuals who pay dues even though they split their time between Maui and the mainland. “It’s the weather. It’s the people. It’s the food,” says Rev. Andrew Valentine about why most of the foundation members relocated permanently to Maui. After five minutes of exchanging family history, we realized that we’re not related. “There are a lot of people of color here, but we don’t always see each other.”

At “Da Kitchen,” the seven members present talk about Maui as only locals can. You gotta taste the pancakes at the Four Seasons. Buy souvenirs at the University of Hawaii, Maui College swap meet on Saturday mornings (look for Alfred Thomas, a brother, who sells incense). Check out the Martin Luther King, Jr. statue in Wailuku in front of the county building.

After lunch, Love insists on taking us to visit the Lava Fields, created by the last volcanic eruption on Maui around 1790. He, Angela, Surlene and I hop into our rental car and drive south into Wailea, the Beverly Hills of Maui. We pass swanky hotels and multi-million dollar mansions before following a long narrow unpaved road into an expanse of rocky, rugged black-as-coal land. The drive seems unending, and eventually Angela says from the backseat “Stop here.” We look at her quizzically. “You will just go for miles and miles, and the terrain will be the same,” she explains.

Outside the car, it’s eerily quiet as a gentle breeze stirs the hot and dry air. We walk along the desolate field and marvel at ebony-colored volcanic rock as far as the eye can see.

This, too, is Maui. Its diverse eco-system ranges from a tropical rain forest to the jagged landscape of a lava field. And we would not have experienced the full scope of the island’s offerings without this off-the-beaten track side trip, courtesy of the Smiths of Maui.