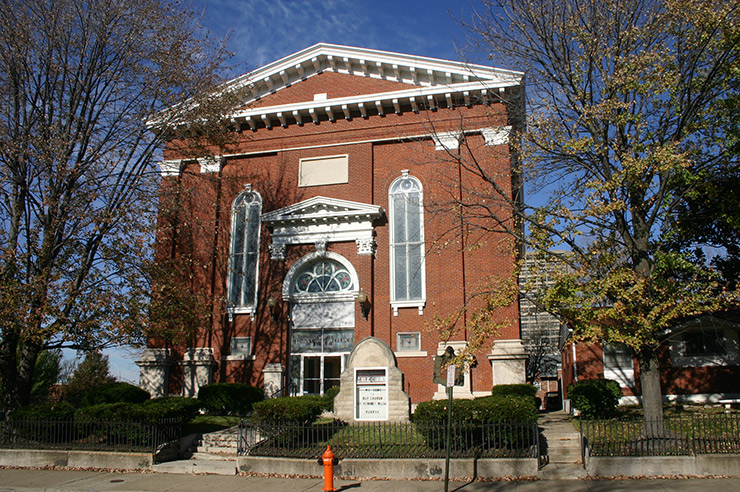 Zion Baptist Church
DESCRIPTION: Organized in 1878 by 18 African-Americans. MLK’s brother, D.E. King, was a pastor of the church. It was an important base in the state for the Civil Rights Movement.
SUNDAY WORSHIP: 11a
ADDRESS: 2205 West Muhammad Ali Blvd, Louisville, KY MAP
PHONE: 502-778-6400
WEBSITE: http://www.zionlouisville.com

Quinn Chapel AME Church
DESCRIPTION: In 1870 members of the church organized what is believed to be the first major local protest of unequal treatment, mule-drawn streetcars whose seats were off-limits to Black citizens. They were victorious in federal court, and the three local streetcar companies eventually allowed Black passengers to ride.
SUNDAY WORSHIP: 11a and on 3rd Sundays 8a
ADDRESS: 1901 West Muhammad Ali Blvd, Louisville, KY MAP
PHONE: 502-583-0324
WEBSITE: http://www.quinnchapelame.com

Kenwood Northeast Baptist Church
DESCRIPTION: Began at Todds Point located on Old Zion Road in 1870 by 9 nine brothers: John Powers, Jordon Taylor, Milton Ellis, Joshua Hinkle, Ben Bradshaw, William Whalen, Tom Taylor, and Monroe Oglesby who named their place of worship, “The Community of Baptist Bothering.” The Methodist Church, named Woolfolks’ Chapel opened their door to the nine brothers and called their first minister, Rev. James Helms. The church was then renamed to Todds Point Baptist Church. As membership grew, they purchased land from Brother Henry Elzy in Shelby County near a little creek called Junkins Run. Nine men in the church belonged to a secret order called “The United Order of Friendship.” A two-story building was constructed using the ground floor as the church and the upper floor as their lodge. This floor was shared with the Shelby County Board of Education for Day School. The Church was named again, Junkins Run Baptist Church. 10 ministers filled the pulpit thereafter. Rev. Sullivan named the new church Kenwood Missionary Baptist church. By 1987, Rev. James E. Booker, Jr. accepted the call to pastor and led the congregation to build a new church in 2003 and name change to Kenwood Northeast Baptist Church.
SUNDAY WORSHIP: 11a
ADDRESS: 8900 Highway 22, Crestwood, KY MAP
PHONE: 502-241-7709
WEBSITE: http://www.kenwoodnortheastchurch.com