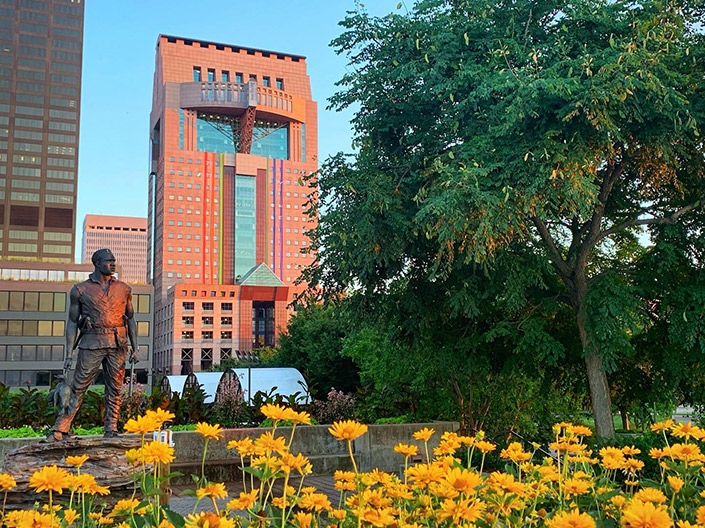 York Monument
DESCRIPTION: The place where the Lewis & Clark Expedition (1803-06) departed to explore the Pacific Northwest, with the enslaved African-American, York, as one of their most important scouts. York lived most of his life in Louisville and was the first African American to go coast to coast and made important contributions to the success of the expedition. York was also the first person of color that Native Americans of the Old West encountered. A Clark family slave born in 1772, York moved with them from Virginia to Jefferson County, Kentucky in 1785. He was inherited by William Clark from father John in 1799. After return from expedition to the West, York lived in Louisville and worked as a wagon driver. He was set free after 1815. Clark reported that York died in Tennessee sometime before 1832.
ADDRESS: Belvedere Riverfront Plaza, Louisville, KY MAP

Russell District Marker
DESCRIPTION: Historic home of the Black community in Louisville. In the days of Segregation, it was a self-sufficient community of businesses and residences whose boundaries extended westward along Walnut Street (Muhammad Ali Blvd) from 9th through 31st Streets. In 1926, this district was named “Russell Neighborhood” in honor of a famous Black educator who lived here, Harvey C. Russell, Sr. (1883-1949).
ADDRESS: Muhammad Ali Blvd at Roy Wilkins Parkway, Louisville, KY MAP

I. Willis Cole Residence
DESCRIPTION: Home of a Louisville pioneer in the Civil Rights Movement who fought against segregation in public parks and street cars. In 1922, he ran for state senate on the Lincoln Party ticket. Cole was successful at shepherding enough votes to pass 19 bond issues that funded community schools.
DAYS & HOURS: not open to the public
ADDRESS: 2217 West Muhammad Ali Blvd, Louisville, KY MAP

Knights of Pythias Temple
DESCRIPTION: Built 1914-15 as the state headquarters for the Black Knights of Pythias lodge in Kentucky, the temple has long since been associated with the development of the African American community in Louisville. Today, it is the only inner-city branch offering an extensive YMCA Black Achievers Program. Chestnut Branch YMCA.
DAYS & HOURS: Mon-Fri 8a-8p, Sat-Sun 8a-6p
ADDRESS: 930 West Chestnut Street, Louisville, KY MAP
PHONE: 502-587-7405

Locust Grove Historic Home
DESCRIPTION: Home to enslaved Africans between 1790 and their emancipation between 1849-1856. Slave numbers varied but county records from 1800 indicate that William Croghan paid taxes on twenty slaves and two white male servants. In 1849, John Croghan’s will listed 22 enslaved Africans ranging from infancy to age 55. These individuals were freed under terms of a seven-year guardianship which provided for their liberty by 1856. Two men associated with Locust Grove made important contributions to U.S. history. York, a slave owned by William Clark, was a member of the Corps of Discovery that traveled with the Lewis & Clark Expedition to the Pacific Ocean. Stephen Bishop was a slave at Mammoth Cave during John Croghan’s ownership of the property. As a guide, he explored previously uncharted areas of the world’s most extensive cave system and drew the famous Mammoth Cave map of 1844.
DAYS & HOURS: Mon-Sat 10a-4:30p, Sun 1:30p-4:30p
ADDRESS: 561 Blankenbaker Lane, Louisville, KY MAP
PHONE: 502-897-9845
WEBSITE: http://www.historichomes.org/lgframe.htm

Louisville Free Public Library-Western Branch
DESCRIPTION: Carnegie Library at Tenth and Chestnut was originally called the Western Colored Branch when it began its history in 1905, the same year in which construction of the main library building of the Louisville Free Public Library on York Street between Third and Fourth Streets was started; the branch, functioning as a community center, was a significant force in the promotion of cultural awareness during this formative period; signs such as “Knowledge is Power” were daily reminders while monthly activities such as the Douglas Debating Club brought topics of special interest to library users.
DAYS & HOURS: Mon, Tue, Thu 12p-8p, Wed 10a-8p, Fri-Sat 10a-5p
ADDRESS: 604 South Tenth Street, Louisville, KY MAP
PHONE: 502-574-1611
WEBSITE: http://lfpl.org