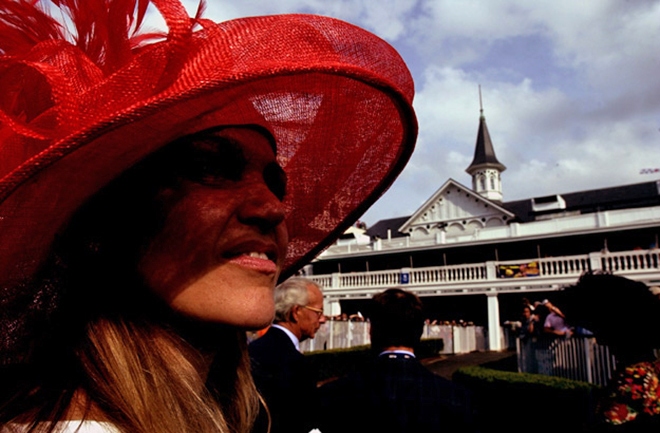 Kentucky Derby Museum
DESCRIPTION: The world’s only museum dedicated to one race, the Kentucky Derby. First run in 1875 and run every year since, it is the oldest continuous sporting and cultural event in the United States. At 56,000 square feet, its one of Kentucky’s premier attractions by capturing the pride, tradition and excitement of “The Greatest Two Minutes in Sports.” Dedicated to expanding public awareness, appreciation, and understanding of the Kentucky Derby and Thoroughbred racing, the museum offers visitors the chance to learn about the past and present of the Thoroughbred industry. Special features include racing artifacts, memorabilia, fine art, computer interactive displays, and exhibits highlighting a particular aspect of the horse racing including the horses, owners and trainers, backside crews, and jockeys, among other aspects. See the Black Jockeys exhibit after watching the welcome movie production entitled The Greatest Race a 360 degree, high definition video. Guides offer walking tours of adjoining Churchill Downs and the museum’s paddock area. There are one-hour Backside Track Tours, a unique way to view the behind the scenes activities at Churchill Downs in the stable and infield areas. A gift shop, and a café.
DAYS & HOURS: Mon-Sat 8a-5p, Sun 11a-5p
ADDRESS: 704 Central Avenue, Louisville, KY MAP
PARKING: paid on premises
PHONE: 502-637-7097
WEBSITE: http://www.derbymuseum.org

Kentucky Horse Park
DESCRIPTION: Upon entry, the Visitor Information Center details attractions, beginning with the short educational film, The Rein of Nobility, which was filmed at locations throughout the world. The film focuses on man’s relationship with the horse. In the International Museum of the Horse, a Smithsonian affiliate, visitors learn about what some believe to be the 55-million year history of the horse. Exhibits include a collection of 19th century horse-drawn carriages and racing vehicles. Horse in Sport gallery displays contemporary uses of the horse in competition. Calumet Farm: Five Decades of Champions exhibit includes 560 gold, silver and crystal trophies, and paintings that trace the racing legacy of Lexington’s most famous farm. The museum also houses a Cultural and Learning Center permanent exhibit honoring a prominent Thoroughbred owner and breeder. The American Saddlebred, Kentucky’s first native breed, is also on display via a large panorama. Located off the main parking lot, the American Saddlebred Museum and Gift Shop is included with park admission.
DAYS & HOURS: Daily 9a-5p (March-Oct), Wed-Sun 9a-5p (Nov-March)
ADDRESS: 4089 Iron Works Parkway, Lexington, KY MAP
PARKING: on premises
PHONE: 800-678-8813
WEBSITE: http://www.kyhorsepark.com

Louisville Mega Cavern
DESCRIPTION: Take a 60-70 minute tour under 17 miles of man-made cavern spanning under roadways and corridors beneath the city of Louisville. It’s a great tour to learn about science and history of geology or simply want to see what a giant man- made cavern of this magnitude looks like. It was created by a massive limestone quarry over 42 years in the 20th century. It was acquired in 1989 by private investors who saw the potential to develop a portion of the cavern into an environmentally-conscious high security commercial storage facility. Even though it’s underground, the MEGA Cavern is the largest building and recycling center in the state of Kentucky. During the 1962 Cuban Missile Crisis, state officials plans that, in case of nuclear attack, it would house 50,000 people because it’s a natural bomb shelter.
PRICING: Varies by age, see website
DAYS & HOURS: tours depart Sun-Fri 9:30a and 11:30a, Sat 10a, 11a, Noon, 1p, 2p, 3p, 4p; Visitor Center and Gift Shop 9a-4p daily
ADDRESS: 1841 Taylor Avenue, Louisville, KY MAP
PARKING: FREE on premises
WEBSITE: http://www.louisvillemegacavern.com