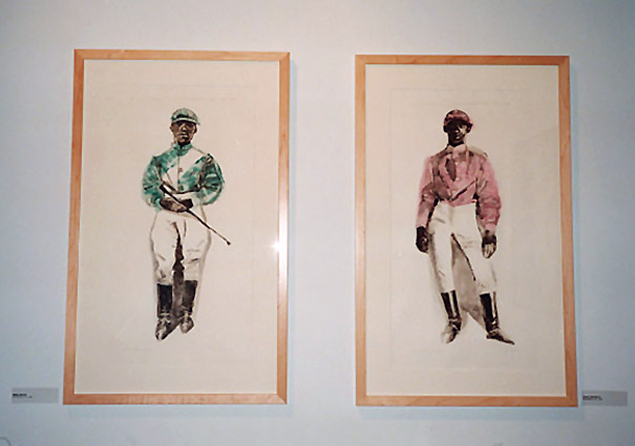 Photos of Black Jockeys who won the Kentucky Derby; (c) Soul Of America

Over the years, several African American jockeys in the Louisville region emerged as Derby winners: William Walker in 1877, James “Soup” Perkins in 1895, Willie Simms in 1896 and 1898, and Jimmy Winkfield in 1901 and 1902. In fact, Jimmy Winkfield was the last African-American to win the Kentucky Derby. And one jockey, though short in stature compare to most men, stood above all others.

Arguably, the greatest jockey in American history, Isaac “Burns” Murphy (1861-1896) was born on a horse farm to a former slave. Murphy’s family lived in downtown Lexington, Kentucky on Jordan’s Row. Murphy is the first jockey to win three Kentucky Derbys (1884, 1890, 1891) and the only jockey to win the Derby, Oaks and Clark Handicap in one meeting. Murphy ultimately rode 628 champions in 1,412 races during a 15-season career. He won an astounding 34.5 to 44% of his races (depending on source) before retiring in 1892 to train horses. No other long-time jockey in America has approached that winning percentage. To place his achievement in context, he was the Muhammad Ali-Michael Jordan of horse racing.

Unfortunately, Murphy’s career was cut short at the age of 34 due to pneumonia. To keep his weight down as a jockey, he was known to binge and purge. For that reason, some speculate that vomit backed into his lungs, causing pneumonia. He is buried at Kentucky Horse Park in Lexington, KY.

Despite racism that would not permit Isaac Murphy to dine with the bettors, many high-rollers made a ton of money betting on his races! So with a measure of indebtedness to him, even in the segregated South, Isaac Murphy was the first rider voted into the National Museum of Racing, Jockey Hall of Fame.

At one point the Kentucky Derby Museum featured an exhibit about the importance African Americans in Thoroughbred Racing. The exhibit featured:

• history of Black jockeys in the sport

• narrated video presentation providing an overall perspective and history of African Americans in all aspects of horse breeding and racing.