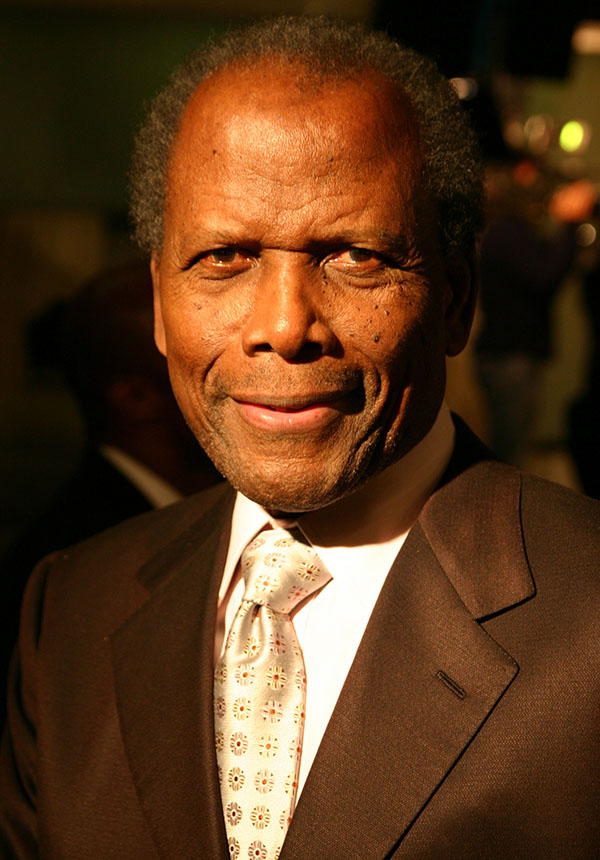 I begin when Sidney Poitier auditioned for an acting role with the American Negro Theater (ANT) in Harlem in 1945. He was rejected because he had difficulty reading & speaking English. Over the next 6 months listening to radio stations, he worked to improve his English, then re-auditioned with American Negro Theater for another role. Once accepted, he became a janitor for the ANT in exchange for acting lessons.

Sidney Poitier was the understudy to Harry Belafonte in the play Days of Our Youth. They became fast friends. Sidney made his public debut while filling in for Belafonte one night.

He was fortunate to get a role in the Broadway play Lysistrata in 1946, followed by a larger role in the long-running Broadway play Anna Lucasta in 1947. Near 1949-end, Darryl F. Zanuck, CEO of 20th Century Fox Studios was reportedly in the audience and quickly offered Sidney a contract afterward.

Though Sidney could have continued in another Broadway play he chose Hollywood beginning with the 1950 movie No Way Out when he was 23. Sidney was content with the role because it was the first big Hollywood movie to portray a black doctor in a positive role confronting racism. He played many more landmark roles in Hollywood movies, including Blackboard Jungle, The Defiant Ones, A Raisin in the Sun, Lillies of the Field, In the Heat of the Night, Guess Who’s Coming to Dinner, and To Sir With Love.

Many people think In the Heat of the Night was the first time a black man slapped and white man in a movie and lived. It was not. Co-starring beside Clark Gable in the 1957 movie Band of Angels, Sidney was the first black actor to slap a white man in retaliation, free himself from slavery and live to the end of the movie.

You made artistic sacrifices in the 1959 movie Porgy and Bess to maintain career progress in Hollywood.

In the early 1960s, Harry Belafonte persuaded Sidney Poitier to accompany him driving in the Deep South with $70,000 for Freedom Summer volunteers in the Student Non-violent Coordinating Committee. Per the New York Times, the two-actor activists were chased by Klansmen who fired guns at them. Undaunted, the two entertainment-activist legends raised more funds for the 1963 March on Washington and the 1965 Selma-to-Montgomery March.

You can tell a lot about the dignity of man in adverse circumstances. One such time occurred shortly after winning the 1964 Oscar for Best Actor his role in Lillies of the Field. A few days later when leaving a Beverly Hills hotel, Sidney handed his car park ticket to the valet for retrieval. An older white lady walked out and thinking he could only be valet, placed the car park ticket in his hand and walked away. Rather than create a fuss, Sidney handed the car park ticket to a valet and tipped him. When the lady returned, she was surprised to see Sidney driving away before her.

When the young back valet arrived with her car he informed the lady, “That was Sidney Poitier, the Academy Award-winning actor rich enough to buy your car and house.” Flustered and embarrassed, she drove off in a huff.

In 1967, Dr. Martin Luther King said of Sidney Poitier: “He is a man of great depth, a man of great social concern, a man who is dedicated to human rights and freedom. Here is a man who, in the words we so often hear now, is a Soul Brother.”

He answered critics who claimed that he only romanced white women in movies. In truth, Sidney had many movies with black love interests from the 1950s to the 1970s. Somehow, his critics missed those movies.

In 1969, Sidney Poitier teamed with Paul Newman and Barbra Streisand to launch First Artists production company. it broadened opportunities for independent filmmakers. He set another Hollywood record directing Richard Pryor and Gene Wilder in the 1980 box office hit Stir Crazy. It was the first black-directed film to surpass $100 million box office revenue, plus additional broadcast and home video revenue. Without that massive hit, more years would have passed after 1982 before Eddie Murphy got to lead a movie like 48 Hours.

He once told Newsweek in 1988, “I made films when the only other Black on the lot was the shoeshine boy — as was the case at MGM. I was the lone guy in town.” Imagine the isolation he felt in long days of work.

For his impact in the movie industry, Sidney Poitier was honored with the prestigious AFI Life Achievement Award in 1992. For service to humanity, he was honored by President Clinton at the Kennedy Center in 1995.

Skip forward to the December 2007 Hollywood premiere of The Great Debaters directed by Denzel Washington. The event was bangin’ at the famous Cinedome on Sunset Boulevard. Most of the crowd was reveling at Denzel, Oprah, and the younger stars of Black Hollywood. I was standing at the end of the photographers’ line nearest to the door. It was not the best place to take pictures since celebrities would rush by to enter the cinema.

Suddenly, an elderly man emerged from the crowd without fanfare with a confident regal gait. He did not walk through the photographers. Instead, he approached the cinema door but did not enter. A healthy 6’3” Sidney Poitier stood at the door only 3 feet from me for about 5 minutes. Most of the crowd was too young to recognize Sidney Poitier, then age 79. Few knew his legacy helped make Black Hollywood possible.

As Denzel passed by me to enter the Cinedome, I remembered that he wished he co-starred with Sidney Poitier before his mentor and friend retired from acting. As we know, Sidney quietly passed away the evening of 6 January 2022. Outside the Poitier Family and Harry Belafonte, I doubt that anyone will miss Sidney more than Denzel.

A Sidney Poitier documentary is underway with cooperation from his family. Oprah Winfrey is reportedly producing the film, and Reginald Hudlin is directing its in-depth look at the man who lived with sacrifice, purpose, and impact on humanity.

Denzel Will Always be Chasing Sidney